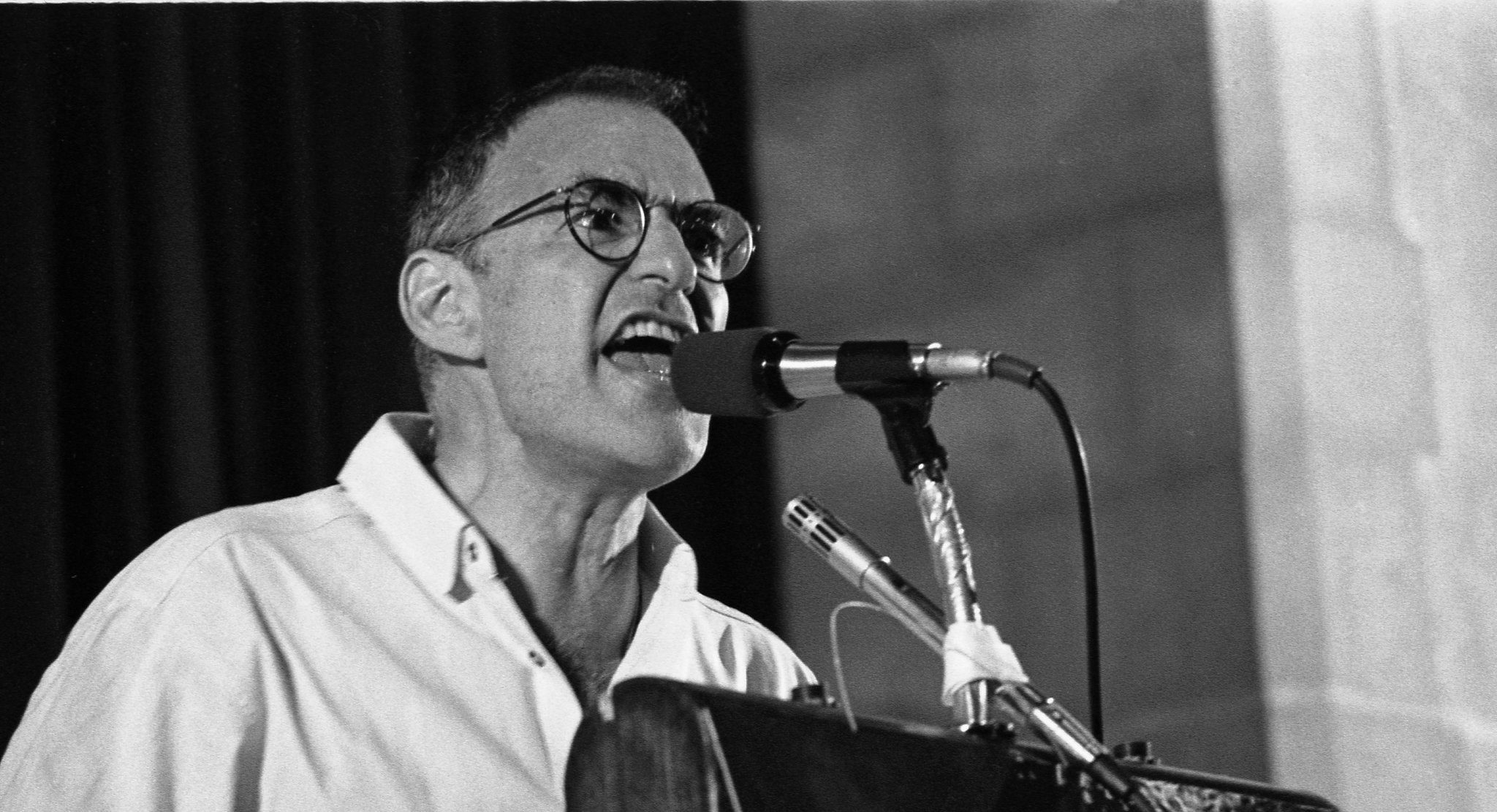 Larry Kramer was born in Connecticut on June 25, 1935, into a Jewish family. He attended Yale University in 1953 and graduated class of 1957. Kramer made his career in the world of film making. For more than a decade he wrote and produced films that won Academy Award nominations, one of which was for his screenplay of the film version of D.H. Lawrence’s Women in Love. Kramer had a very successful career in the movie industry and was a very good writer.1 But in June of 1981, the first cases of AIDS were reported in the United States. This disease spread in certain populations, like among gay and bisexual men, and among racial and ethnic minorities. Larry Kramer stated,” I started making a list of how many people I knew and it was hundreds. People don’t comprehend that. People really were dying like flies.” In the same year, Kramer hosted a meeting in his apartment that would later become the Gay Men’s Health Crisis. Although, Kramer was nothing close to a pacifist. He was kicked out of the Gay Men’s Health Crisis in 1983 because of his confrontational style.2 Larry Kramer never kept silent. He always called out health workers and peers for their ignorance towards the disease and for there not being enough information on safe sex. Larry Kramer gave a speech on March 10, 1987, at the Lesbian and Gay community services center in New York City. “1987 We have little to be proud of this Gay Pride week.” He then called out the NIH for having money they never spent for research that could help cure AIDS or just give the correct medications to stall death a bit longer until it could be controlled. He also called them out for the horrible facilities they had for AIDS patients, which looked more like a prison where the patients lay there getting worse and worse waiting for their death. Six years and no change.3

He also made sure to call out his own gay and lesbian community for not having the urge to make a change. They saw what was going on in their own community, but were just ignoring it. They watched their friends die and still pretended that the government was going to help them. Kramer saw that there was no sense of urgency among them when people were dying every day. AIDS was a plague. Americans, a son, a brother, a sister, a friend were dying every day and the government was not working fast enough to save them. The speech demanded that the public and the gay community go talk to school boards to get them to teach sex education in school. His speech was the fire that the nation needed. What Kramer truly wanted was to bring awareness of the disease and to lower the prices of the drug AZT so that it could be available to the victims dying of the AIDS disease. Kramer truly wanted change, so he asked interested parties to join him to form a political activist group. Thus ACT UP! was born. With this organization, Kramer got his voice heard and made sure others’ voices were heard as well. His tactics were to go directly to the government and have no shame while doing it. Kramer once dumped the ashes of a young friend onto the South Lawn of the White House. He made this move very symbolic, as he was claiming that it was the governments’ fault for his friend’s death, for not having the proper medications available nor the proper care.4 He also helped wrap Senator Jesse Helms’ home in a condom to promote safe sex, and to promote the need for schools to be teaching young teens about the importance of safe sex. Another great tactic was the constant nagging and shaming of the NIH and FDA as he already had in his speech he kept the momentum going until a true change started to happen.5

Larry Kramer has been an influential voice, not only for the LGBTQ+ community but also for the fight against the AIDS epidemic that swept the nation in the 1980s and 1990s. Because of Kramer and that one speech in New York City on March 10, 1987, Kramer helped turn the tide of the epidemic. He not only blamed the government and powerful organizations like the FDA and NIH, but he also made sure to let his own community know that if you pretended as if the disease didn’t exist because you didn’t have it, you were doing as much damage as the ones who would rather see you die than live. Because of his actions and words and organization, AIDS research began to be a top priority for scientists to find cures or to find better medications. He helped “putting medical treatment in the hands of patients, changing medicine in this country, and getting drugs to more people faster.”6 ACT UP used any action that could generate a public view for its cause. This made the organization gain a lot of news coverage, which brought a new age of AIDS awareness. He led the way to protest in a militant style. He gave inspiration to the gay liberation movement and other small groups that were raised that used similar actions to achieve success. Larry Kramer is still and forever will be a gay legend in the LGBTQ+ community that will forever be admired and cherished for his amazing work and courage.7

Bringing awareness to aids by Larry Kramer makes him a very strong advocate for people who were suffering from this horrible disease. He stood up for what he believed in and not only himself, but for many people in the LGBTQIA+ community. During this time, it took bravery and real courage to do this. This man will forever be known as a hero!

A very good article. It’s odd that such a pivotal and important time in America was left mostly shrouded in ambiguity aside from the fact that it happened and few people did anything about it. Just as important as the fact that action was not taken when it should have been are those who brought accountability and forced action to be taken. Tellingly, I cannot recall ever learning about Larry Kramer, but I’m glad that I do now. Clearly he worked tirelessly and fearlessly not only to advocate on the behalf of the LGBT+ community, but also for public health in the midst of a horrible and tragic epidemic. Truly both monumental feats.

This article helped me realize the importance of how we must help move along the importance of major issues that we believe in. Larry did an great job of expressing his feelings to the AIDS epidemic and trying to spark up a change and movement among the LGBTQ Community, doctors, and government. Because of this he furthered research into this cause and got the results he was looking for. If we can do this with our issues, we can strike up big difference in the world.

This article gives both an insight on the gay liberation movement and parallels to the current global health pandemic. Not many media outlets or history books give coverage to movements of minority groups and their particular struggles. This article did a great job at explaining how the lack of attention to the epidemic could be a direct cause to the amount of lives lost. This article very much parallels the struggles that COVID-19 has brought especially the lack of empathy were the author includes the quote on silent or inactive community members.

The title of the article really caught me off guard (it was definitely eye-catching!) because I thought it was like an airborne disease that was spreading and infecting millions of people but instead I found myself realizing that this article was really about a disease that killed millions without them realizing it until they had finally contracted it. Larry Kramer is a real outspoken hero that helped saved millions who didn’t have the money to obtain medicine that was killing many through out the LGBTQ+ community. Instead of being a bystander and minding his own business like many did during this time, he took a stand that made him very noticeable and played a big role in the awareness of AIDS plaguing the community. He didn’t like that no one was actually doing anything to stop the rising number of death so he took a stand and provoked both the government and the community to do something about. Larry Kramer is truly remarkable man! Overall, the author did a great job telling the story of a remarkable man who was tired of this disease taking the lives of many.

This was a very informative article that I enjoyed reading a lot. It’s tough to always be the person who is brutally honest, but Larry Kramer knows that in order for change to happen, someone has to speak up. Thankfully the education system for these topics isn’t as bad as it used to be but there still needs to be improvement because it’ll save more lives in the long run. This man created a movement and did it with no regrets.

Hey Jaqueline, your article is great! I’m glad you chose to write about this topic because it is so important, we shine light on these topics to create some kind of change hopefully. Larry’s story is so inspirational, and I was so amused by everything he did for his community. What Larry did of confronting the government about this problem with the “ACT UP!” organization was part of a chain where many other movements also demanded that the government do something about the problems they advocate for.

It always takes a huge amount of courage to speak out for what you believe in to help a community, especially a community that is often overlooked and neglected. Before recently, minimal light had been shed on the LGBTQ+ community for the acceptance of many different people. Instead, a negative stigma of disease was attached to this community that many were afraid of being associated with them. Larry Kramer stood against the odds and the law to advocate for those who didn’t have a voice.

The article was very informative and easy to read and digest. It’s important that Larry Kramer spoke out to bring awareness to the AIDS epidemic and advocated for those who had been infected instead of speaking out against those who were affected. Overall, I thought Kramer did a good job both supporting those in the LGBTQ community and bringing awareness to this disease. It definitely took courage to speak on the topic especially during the time period. Thankfully we are now more educated on the topic and more accepting of the LGBTQ community.

This article on how Larry Kramer was very informative about how he stood up for the people that got AIDS. He believed in how it was a terrible disease to struggle with and he felt sympathetic towards everyone suffering. This article topic ties between how AIDS affects people everywhere in the world back then and right now. Larry was a big here/advocate for the LBGTQ+ community he brought to the attention that these people were being denied access to get the medicine they deserved because, in the end, they are still people like everyone else. These days, the education system is better about teaching everyone about this deadly disease and how to prevent it.