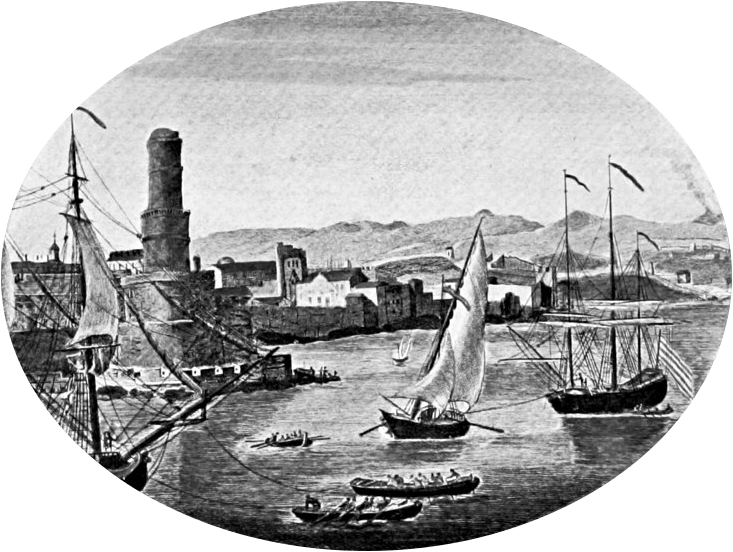 Today, Port Royal, Jamaica is a small isolated fishing village with little left standing to remind any visitors of the grandeur of Port Royal’s wicked past. Frequently the subject of story tellers and movie makers, Port Royal began as a seasonal fishing camp used by natives; it then rose to become the largest and wealthiest seventeenth-century English city in the New World, only to return to its humble origins. To tell the story of Port Royal, one must talk of geology and geography, buccaneers and pirates, poor city planning, and natural disasters.

Geologically speaking, Port Royal was not a suitable place for building a city. It sits at the end of a stretch of sand and gravel known as the Palisadoes, creating a border between the Caribbean Sea and Kingston Harbor. The Palisadoes is made of sediment run-off that ended at the north side of Port Royal. An English soldier’s journal from 1655 described it as a stretch of sand barely above water, while a report from the 1670s described Port Royal as a narrow stretch of land covered with loose sand, with no grass, stones, fresh water, or trees. Modern scientists believe that most of the town sat on water-saturated sand for a depth of sixty-five feet.1 No matter how one looks at it, the ground beneath Port Royal was not ideal for a large bustling town, but that did not stop the English.

The geography of the natural harbor that would become Port Royal was ideal for many uses. The harbor was naturally wide and deep enough for large ships while providing excellent ground for anchoring.2 The area was originally used by the Taino Indians for a seasonal fishing camp, with no permanent structures. The Spanish used it as a port, but also built no permanent structures in the area. Upon taking control of Jamaica from the Spanish in 1655, the English quickly realized the potential of the harbor as a center of commerce.3

Originally known as Point Cagway, the town grew quickly. In the summer of 1655, the English began building a fort to control access to the harbor. Like most ports, the town was quickly settled by mariners, merchants, craftsmen, and prostitutes. By 1664, the town was renamed Port Royal. Expansion of the town was driven by legitimate trade with England and her colonies as well as illegal trade with Spain. Within a few years, Port Royal had grown from a seasonal fishing camp to a bustling port of trade in slaves, sugar, and raw materials vital to the English success in the Americas.4

Port Royal became a haven for buccaneers and pirates at the invitation of the various governors of Jamaica from 1660 to 1680. In an attempt to keep the Spanish from reclaiming Jamaica, the governors issued several buccaneers letters of marque, which allowed them to attack Spanish ships anywhere near Jamaica. One such buccaneer, Henry Morgan, made his home in Port Royal, eventually receiving a knighthood and holding the post of Lieutenant Governor of Jamaica. The pirates followed the buccaneers and attacked any ship deemed worthy of plundering, including English ships. This forced Jamaican authorities to outlaw piracy in 1678, arresting and executing several pirates to set an example.5 However, many pirates continued to operate out of Port Royal for many more years.6

Due to the substantial amount of citizens involved in pirate activity, Port Royal quickly earned the reputation as being the “wickedest city in the world.”  It was estimated that twenty percent of the town was either brothels, gambling dens, or taverns, while fifty percent of the town was involved in piracy or privateering. However, most English sea ports outside England, Pennsylvania, and Massachusetts had a similar makeup. Even with this reputation, it was recorded in 1688 that craftsmen could make three times the wages earned in England, making such cities perfect places to begin a family.7 The citizens of Port Royal had a tolerant attitude towards diversity, religion, and lifestyle. It was a place where Quakers, Catholics, Anglicans, Presbyterians, and Jews practiced their faiths next to soldiers, pirates, and prostitutes.8

Port Royal became the largest and most affluent city in the Americas, doubling in size between 1657 and 1691.9 Although no census data exists, there were roughly 7000 to 8000 people living on the 52 acres that made Port Royal in 1692, a population density of roughly 145 people per acre.10 Due to the limited amount of available land, the growing population required residents to improvise and find space. They did this by two methods. First, officials in Port Royal granted individuals the rights to shoalwater, an area of shallow water that could be altered for development. Most of these individuals turned this shoalwater into land for building, even though it was essentially land that was part of the sea. The second method used was to simply build taller structures. Without possessing the modern knowledge of building in earthquake zones, the people of Port Royal built using brick to erect structures as high as four stories without providing a structurally sound foundation for the weight of the building. By the summer of 1692, there were approximately 2000 structures occupying Port Royal.11 Port Royal had grown too quickly to accommodate the people on the land available.

On 7 June 1692, shortly before noon, an earthquake hit Jamaica, destroying Port Royal for the first time. Throughout Jamaica, structures crumbled and people fell in the streets, but in Port Royal something very different happened. Eyewitness accounts state that buildings remained standing and people ran through the streets. Other people witnessed the streets, people, and buildings simply sink straight down into the ground.12 Some people were swallowed incompletely, remaining half above ground and trapped in the sand. There were also several witnesses that reported seeing fountains of water and sand shooting up into the sky from the ground below.13 When it was all over, two-thirds of the town was under water and roughly 2000 people had died with another 2000 dying in the immediate aftermath. The aftershocks continued daily into September.14

Initially believed to be a minor earthquake lasting only a few minutes, scientists now know this is incorrect. The geological process for what happened at Port Royal is known as liquefaction. It is a process where vibrations from an earthquake turn loose, water-saturated sand into a quicksand-like substance that can no longer support the weight of anything on the surface of the sand.15 The condition ends when the vibrations end. Liquefaction takes at least five to seven minutes to occur and requires many strong vibrations in quick succession to prevent the sand from returning to a normal state. Liquefaction also causes fountaining, or water and sand to shoot up many feet through holes in the sand. That is why scientists now believe this earthquake must have lasted at least ten to fifteen minutes and had to be of a magnitude of 8.0 or higher.16

Not wanting to give up their natural deep harbor at Port Royal, survivors decided to rebuild their town, setting up temporary housing in Kingston. However, it would seem that Port Royal was doomed to suffer. In 1703, a fire reduced most of the town to ashes. Returning to Kingston yet again, but this time bringing with them their livelihoods, residents rebuilt Port Royal a second time. The town was once again completely demolished by a major hurricane in 1722.17 Determined to remain, the town rebuilt a third time and was hit by another major hurricane in 1744. This time, very few people wanted to rebuild and the town came back with about 100 houses. Even so, the disasters kept coming. In 1770, there was a minor earthquake in Port Royal that did very little damage. This was followed by another major fire that destroyed almost the entire town in 1815. Then another massive earthquake in 1907 demolished the town, and finally a major hurricane in 1951 left only four buildings standing.18

From its beginnings as a seasonal fishing camp for the natives, Port Royal rose to become a city of great importance for England and its trade in the New World, only to be reduced to a small fishing village today. Although viewed by some as the “wickedest city in the world,” Port Royal was a city that catered to sailors and merchants, like many other port cities of the day. The stories of pirates and treasures common today harken back to a time period that lasted approximately thirty years in Port Royal. To understand the real Port Royal, one must also consider the geology and geography of the city, its buccaneers and pirates, the poor city planning, and the many natural disasters that created and destroyed Port Royal over its life.