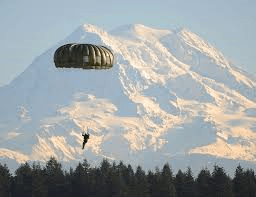 What is courage? What is strength? Perhaps it is being ready to fight for your nation even when your nation isn’t ready to fight for you.1 Imagine jumping out of a plane for the sole purpose of protecting that same nation. That is exactly what the 555th Infantry, the first all African-American unit, did during World War II. They stood in the doorway of the plane with a hundred pounds of gear strapped to their backs and await the jumpmaster’s commands.2 They hear “load” and “follow the trooper in front to your spot” and “wait.” As your turn approached, you looked down and saw the world below you as the wind ripped around your face. The men in the 555th battalion stood out among the rest of those troopers because they had to fight to be able to stand on the edge of that plane’s doorway and stare down fear in the face. They did this for the sake of a nation that segregated and mistreated them.

During World War II, paratroopers would leap from planes and parachute behind enemy lines to gather intelligence or fight from the inside of a battle and work their way out. Many, including the US military, believed that to be a paratrooper one needed specialized training, extreme physical fitness, courage, and, up until the Triple Nickles, white skin.3 The 555th Parachute Infantry Battalion was not legitimately formed until December 31, 1943. Before officially becoming a unit, many of the African-American soldiers did menial things like cooking and cleaning.4 Enlisted African Americans were segregated from white soldiers and regularly assigned to those kinds of duties. While thousands of American soldiers were fighting the Axis powers, African-American soldiers were fighting discrimination to be able to fight alongside those overseas. However, at Fort Benning, Georgia, one enlisted African American, Walter Morris, decided he wanted to change that. Morris and his company were assigned the task of cleaning up the training areas where the white paratroopers prepared for parachute duty. Morris saw the struggles and low morale of his company, so he decided to give them a goal to strive towards. Each night after all the other infantry parachute units finished training, Morris and his men would run through the same course that they saw performed earlier that day. This course included 34-foot towers, mock aircrafts, and pull-up bars.5 They secretly went behind the backs of authority figures just to feel a new sense of purpose. Not long after this, Morris saw his men transform into soldiers. However, that all came to a crashing halt when the company’s secret training sessions came to the attention of the commanding General Ridgely Gaither as he drove past the training field one night. The next day Morris was called to his office while the rest of the battalion awaited their fate.

Morris walked into the office and explained what he and his men had been up to and accepted full responsibility for their actions. However, in an unexpected turn of events, the general said, “I’m going to tell you something you don’t know, Walter Morris,” and proceeded to praise him and his men for taking initiative.6 The general officially assigned Morris as the first sergeant of the newly created 555th Parachute Infantry Unit as a test platoon. As Morris left, he said, “My head was in the clouds… My heart almost bust right there.”7

The 555th Infantry, also affectionately nicknamed the Triple Nickels, began training in January 1944. The men knew that they had a difficult challenge ahead of them, because they had to be better than any other unit to be considered equivalent. There were different stages of training that they had to undergo to be able to graduate. Stage A consisted of extreme physical fitness from daylight to dark, with classes on equipment and orders in between. In Stage B they began using equipment to complete obstacles on a much higher level. One of these training sessions included the Trainasium, which was a large obstacle course in the air that was used for agility exercises, and which would test a trainee’s ability to carry out simple instructions and activities above ground level as well as help the trainee conquer any fears of heights he might have.8 Therefore, the paratroopers worked and trained twice as hard as the white paratrooper units.9 Soon, the 555th became one of the best trained battalions in the army. When graduation arrived on February 8, 1944, seventeen paratroopers received their wings. Morris was the first African-American paratrooper to parachute out of a plane. They were the very first all African-American paratroop infantry, while also taking a step in the direction of ending segregation in the military. They were pushing the government towards racial justice and beating the odds of being an African-American paratrooper. Not long after they graduated, they became more well-known, and other African Americans began to enlist to be a part of the company. So many men joined up that the company grew into a battalion. The Triple Nickels patiently waited to be assigned to go join the fight in Europe, but the assignment they received was not what they had expected. The battalion was assigned to a 300-man smokejumper firefighting component in Camp Pendleton, Oregon.10

The Japanese had created a type of incendiary bomb that Americans commonly called balloon bombs. Japanese Lieutenant-General Reikichi Tada led a program that designed a four-meter balloon capable of delivering explosives up to seventy miles.11 After nearly a year of research and testing, his team came up with a design capable of remaining aloft for thirty hours at an altitude of 25,000 feet for over hundreds of miles.12 The Japanese would launch the balloons from submarines, which would release a 5-kilogram bomb once it touched down. The bombs were intended to land in forests and cause massive forest fires, which would put the lives of Americans at risk. The American navy would not send out aircraft or ships to stop these submarines because they did not see it as a large threat. The Japanese kept modifying and perfecting their balloons to the point that they could fly all the way from Japan to America. At one point, America had approximately ten thousand balloon landings. They needed someone to be able to get in and disarm them quietly. The Triple Nickles were disappointed in their new highly classified mission, but were pleased that they had been assigned a task to help America in the war.

These bombs were initially discovered by a young preacher, his wife, and five teenagers. They stopped because they had found a truck stuck in the mud. They all got out and were heading over to offer some help. However, his wife and the five children spotted a large balloon not far from where they were standing. Before the young pastor could tell them not to touch it, a large blast exploded from within the balloon. All six innocent Americans died in the explosion and the army and forest service then started discovering more of these balloon bombs. Shortly after, the army began Operation Firefly. Although the Triple Nickles did not get to go overseas, they began to see the importance of their mission and the contribution they would make, even if no one was watching.

This 555th Infantry Battalion was assigned to the Forest Fire Service as part of Operation Firefly.13 Operation Firefly was tasked to prevent forest fires, halt forest fires, or prevent an explosion if the balloon bombs were still armed. The Forest Service was having a hard time battling the fires because they could not get men into the forest fast enough to stop the fires while they were still small. The men took part in training to learn how to parachute down into rugged terrain and set up a fire line to stop the fires. The battalion also went through demolition training so that they could disable unexploded bombs. They were given fifty-foot ropes in case they got stuck in trees, and a parachute. The men started wearing old football helmets with chicken wire as face masks to protect them from branches and rough landings. The unit would stay in the fire zones and forests for days at a time, and when they extinguished a fire, they would then hike back to base miles away. The military and Forest Services kept the missions of the Firefly operation secret. They did not want Americans to know that America was under attack on its own soil, and they did not want the Japanese to know that their small-scale attacks were successful. The 555th Parachute Battalion became the first and only “smoke jumpers.”14

In the spring of 2010 the Pentagon paid tribute to the Triple Nickels for being the US Army’s first all-black paratrooper unit and for their contributions to the safety of America.15 By the end of the war, the 555th parachute infantry battalion logged more than 1,200 smoke-jumping missions. The 555th infantry smokejumpers’ assistance in Operation Firefly helped save American lives. But it also helped to keep the hopes of Americans positive during the war by keeping the balloon bombs a secret. They succeeded where they were not expected to succeed and overcame pitfalls that were put there. It had nothing to do with the color of their skin. It had to do with the bravery that each one of those men had inside of them.