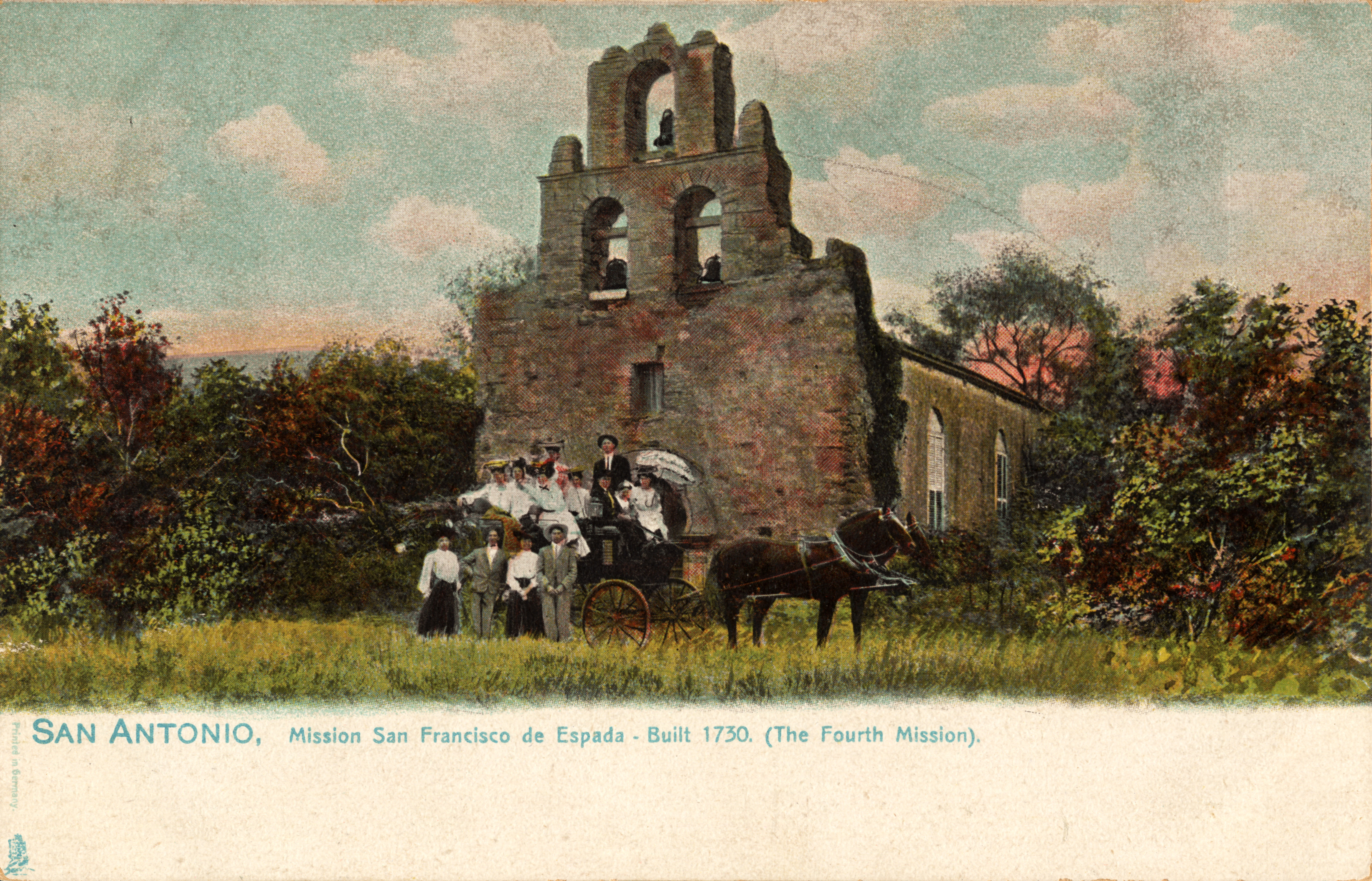 Have you ever heard the story about the old spirit that walks the walls of the old ruins at night? They say he waves a lantern back and forth to guide people across the San Antonio River at night. The walls are gone now, and few people walk through the river anymore. Hidden among a dense forest of oak and mesquite trees, and behind a bunch of cattle, under a lot of sand, are the ruins of a part of history that helped make Texas the great cowboy and cattle capital that is today.

Now imagine growing up, hearing stories told by older generations of a lost ranch outpost that was once part of Mission Espada in San Antonio, hidden among the brush. Stories of a ranch that was vital not only to the culture of the past but also to present-day South Texas. Legends of tunnels leading to the San Antonio River and lost treasure have been passed around in hopes of one day finding the locations. This place has many names, but locals know it as Rancho de Las Cabras. Today, Rancho de las Cabras is located off State Highway 97, outside a small town named Floresville in Wilson County.

In 1731, a group of colonists from the Canary Islands off the Iberian Peninsula settled the Villa de San Fernando de Bejar, which would later be called San Antonio.1 Rancho de las Cabras opened as a mission post around 1731 when the Canary Islanders complained of the mission’s cattle trampling and ruining their land. There were many livestock according to a report from 1745: 1,150 cattle, 750 sheep, 90 goats, and 30 horses and oxen. The friars of the mission moved the animals 30 miles southeast of what would be known as “Mision de Las Cabras” (or Rancho De Las Cabras). The highly successful mission outpost provided Mission Espada with a surplus of meat. 2

Rancho de las Cabras served as a mission outpost for the San Francisco Mission Espada, which is about 30 miles north. Both missions were on the San Antonio River, which played a vital role in shaping Texas. The ranch was run by missionaries and colonized Native Americans, who were believed not to have been native to the San Antonio area, beginning in 1731.3 The headquarters was built between 1758 and 1762. Those who lived in the outpost fell victim to constant raids by the Lipan Apaches and other raiders because it was far from the protection provided by soldiers from the Presidio San Antonio De Bejar’s.4

Historians credit Rancho de Las Cabras as the birthplace of the Cowboy culture (vaqueros). The outpost’s success with livestock is why Texas has a large cattle ranching industry today.5 Locals pride themselves on this contribution to the state’s identity and economy. Wilson and Atascosa Counties have an ongoing debate about the being the original “Home of the First Cowboy.” One of the towns in Atascoca County even has a museum dedicated to its history.

Rancho de las Cabras began to decline in the late 1700s, first with attacks from the Lipan Apches. Then, during the late 1700s and early 1800s, the missions were secularized. With this change, all of the unbranded cattle became property of the crown of Spain, and the vast herds number dwindled. A descendant of the Canary Islanders, Ygnacio Francisco Xavier Calvillo, acquired the ranch. When Ygnacio was killed by his grandson, his eldest daughter, Maria Del Carmen Calvillo, gained ownership and control of the property. Calvillo left behind a great legacy of her own success at the ranch. She was known for her “independent spirit,” and she frequently defied the social norms of Spanish and Mexican society. She traded meat from her ranch with local Native Americans to relieve some of the tensions between the two groups. She maintained control of the land until she passed away in 1856. After Calvillo’s death, the land went to two of her children. What became of the ranch slowly faded from the local memory.6

Little is known about what occurred during the time period of the lost and forgotten mission outpost. However, it is an even greater mystery why this once important piece of land was forgotten by the locals who lived around it. The question of how and why it was forgotten is something the Wilson County Historical Society seeks to answer, which now takes great pride in the restoration and conservation of Rancho de Las Cabras by bringing it forth into the memory of the county once again.

In the early to mid 1930s, there was a reemergence of memories about Rancho de las Cabras. According to Gene Maeckle, once mayor of Poth, Texas, Judge Stevenson of Wilson County encouraged people to pick up stones from the site to remember the history of the area. Maeckle explains that Judge Stevenson also ordered for the stones to be used for the construction of a bridge abutment near Rancho de Las Cabras and a smokehouse for personal uses. There is a story about the hidden ancient settlement amongst the brush found in a Wilson County Newspaper in 1934. Just two years later, a monument was erected in honor of the mission outpost, but historians have noted that there is incorrect information and misspelling (“Mission of Las Cabreras”) on the gray protruding slab.

Little information about the site exists again until the 1970s.  In 1970, the State Historical Survey Committee erected another sign in honor of the site, including information about the ranch after it was secularized. People again began recalling different stories and experiences of Rancho de Las Cabras, from playing there as a child, going there with the Scouts, camping with the Civilian Conservation Corps (CCC) or just trying to enjoy a hike while looking for the alleged tunnel and Spanish treasure. In 1973, the Texas Historical Commission certified that Rancho De Las Cabras in the National Register of Historic Places. The University of Texas at San Antonio began conducting archaeological surveys and excavations that are still occurring today. During this time, conversations about the site becoming part of the National Park Services were up for debate.7

The National Park Service then acquired a small section of Rancho de las Cabras that had a piece of the ruins on it in 1995. Tours started in the late 1990s, which is also when people realized they had taken stones that did not rightfully belong to them.  On the tours, you can see piles of guilty consciences that grew in the middle of the night. No one knows for certain how the piles increase or who is returning piles of the original rocks once taken. Maybe the old spirit is guiding those guilty consciences back to the place where the rocks belong. Around 2011, talk of the San Antonio Missions and outposts began to be inducted into the UNESCO World Heritage Site list.

In 2019, the site receives funding from the government and has plans for a new roadway into the park, parking lot, and interpretive visitor’s center. The road has been paved, but there is not yet a visitor’s center. UTSA’s archaeological team began opening up excavations for the public to participate in.  Broken pottery, jewelry, and buttons are just some of the interesting things amateur and professional archeologists have uncovered there. This was a very big deal for Wilson County because it could generate around 56 jobs by 2016, and there was a $4.8 million proposal to go towards the ranch. In July 2015, Rancho de las Cabras became part of the list of UNESCO World Heritage sites, along with the other missions in San Antonio.8 Around the same time, a story emerged in the Wilson County News about the old “Floresville Grammar School” being torn down. The narrator of the story tells the connection to the school, as it was a place they attended and thought it was awful that they were tearing down the walls and she wanted a piece of history. However it turns out these pieces of rock belonged to Rancho De Las Cabras.9

Today, one can take the state highway and pass ranches, the county convention center, the city park, and catch a glimpse of the Promise Land Dairy on the way to the site. The site is not open to the public unless there are events taking place which you can find on the SA National Parks Service events Facebook page.

Multiple buildings in the Floresville area still have rocks from Las Cabras within their constructions, such as the Wiseman-Bump House, that can be seen today. With Rancho de las Cabras, we can see the rise and fall of how people remember a historical site, as well as the changing importance it held to the community. It is important to maintain memory and pass the information to the younger generations. Stories provide a testament to local memory, whether true or not. Story-telling preserves the memory of local histories. So those local legends you always hear? Or the elders of the town rambling about something that used to be that could be found in your local area? Maybe there is some truth to them and should not be completely disregarded.  There is a large lesson to be learned with the mission outposts and it is clear that there is still much work to be done to find even more answers about the mission outpost. Memory is important not only to communities but also historians. Local historians are always needed.