The Mass Suicide of Masada 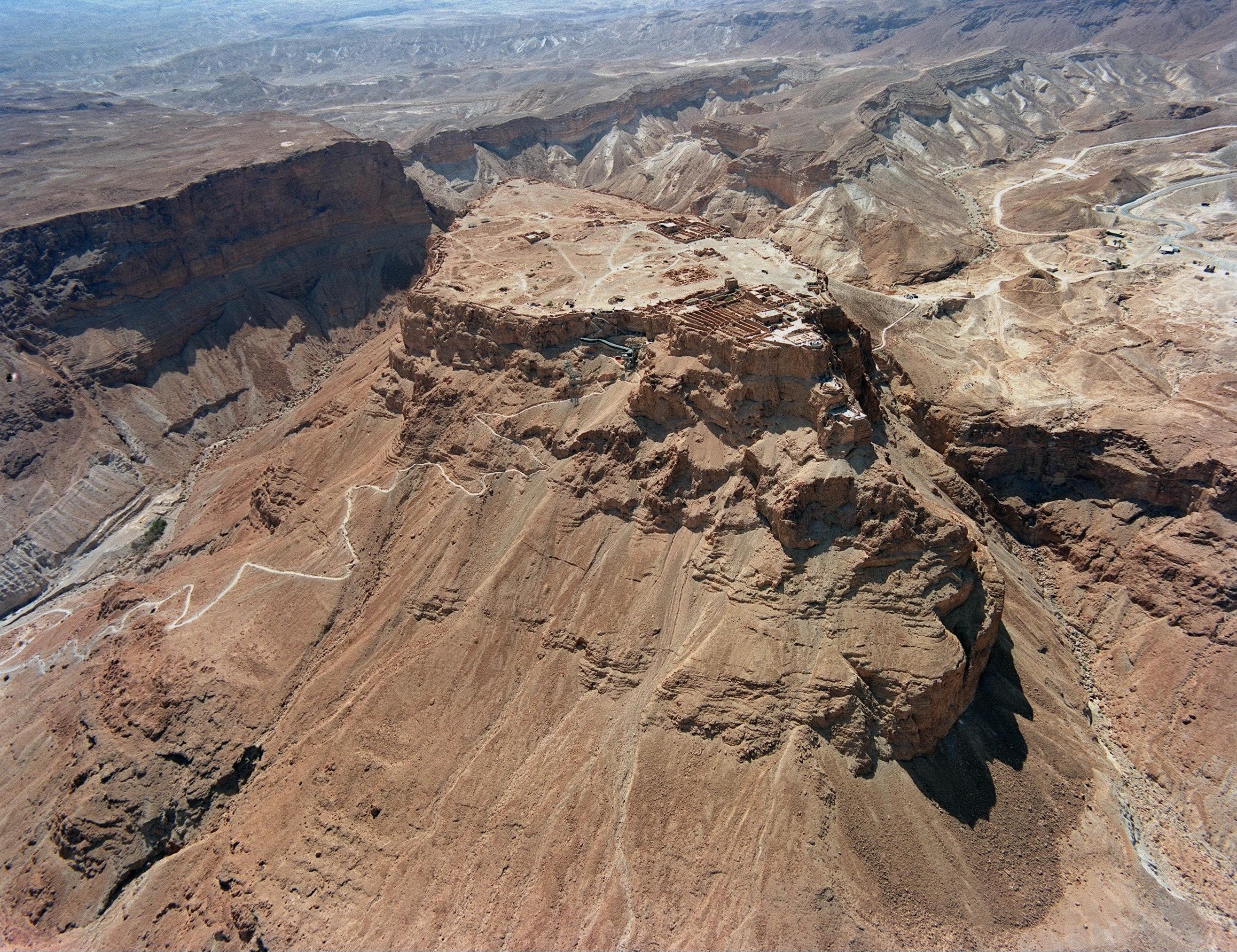 Masada was an impressive fortress built upon a plateau to protect Jewish Zealots and refugees from the Romans. The Jews wisely chose this location because of its natural defenses against invaders. They imagined it would be impossible for anyone to besiege the city; the treacherous terrain and great outer wall surrounding Masada surely would protect it. Unfortunately, the Jews underestimated the Roman army.

Masada appeared to be the perfect fortress. Its four vertical sides made it nearly impossible to invade. The largest wall on the eastern side is one hundred forty meters above the desert floor, roughly half the size of the Eiffel Tower. From the east, there is a dangerous zig-zagging trail called the serpent’s path. The western side wall is eighty meters above the desert floor, as tall as the Statue of Liberty. The inhabitants took the extra precaution and built two walls on the perimeter of the plateau about 1400 meters long and six meters tall. The outer wall was 1.4 meters thick and the inner was 1 meter thick. Between the inner and outer wall, there was an empty space. During an invasion they planned to fill the gap with stone, wood, and dirt to strengthen the wall; until then it was used for storage. There were also twenty-meter-tall towers strategically spaced out throughout Masada for defensive reasons.1

The defenders were aware that if one were to attack, the first action the enemy would take would be to stop the water supply. Anticipating that possibility, the defenders built twelve cisterns to hold the water inside the fortress. Along the western slopes they had enough water stored to fill sixteen Olympic pools. It was very forward thinking of the Jews to do this. They also had many food storehouses toward the north. They kept grain, oils, corn, wine, dates, along with other foods. Thanks to the dry climate, storing the food was not a problem. In case they were to run low, the flat land would be ideal to grow additional food. Remains of the wall, tower, cisterns, food storage buildings, and other structures are still visible today.1

Unfortunately, these precautions were no match for the Roman army. In 73 C.E., Flavius Silva marched the Roman army and other troops totaling about 10,000 soldiers south to conquer Masada. Waiting on top of Masada were the 1,000 men (Jewish refugees and Zealots) willing to defend their safe haven. The Romans were aware it would take a significant amount of time to destroy Masada, so they set up camp and had Jewish war prisoners bring a constant supply of food and water. They first stopped up the aqueducts and diverted them for their own use. Next, they constructed a wall around Masada to prevent the inhabitants from escaping, and to cut them off from the outside world, a classic Roman war operation. The wall was three meters high and 3.2 kilometers long, and enforced by eight camps with many other guards posted. This impressive mechanism was built in a matter of days and can still be seen today.1

The Romans knew this would not be a quick victory; they would have to overthrow Masada by force. They came to the conclusion that the only way to reach the top of Masada was by making the steep side into a gradual incline. To do this, they took advantage of a natural spur called the white rock on the western side. It was nearly two hundred meters from the top of Masada to the edge of the natural gulf. The ramp to the top was built at a twenty degree incline. It took months to build the massive ramp. Every day, the inhabitants of Masada would wake up to see the enemy growing closer and closer, with no way for them to escape. As the Romans got close to the top, they became more vulnerable to the defenders. The Jews at the top could now shoot arrows and defend themselves against the Romans. As a result, the Romans had the Jewish war prisoners shield them so that they could shoot back. Within two months, the great ramp was complete. It was two hundred twenty meters long, and archaeologists assume it weighed as much as one and a half empire state buildings.4

The Romans attacked Masada with their siege towers. They rolled the massive towers up the man-made ramp to overthrow Masada. The inhabitants tried to fight back, shooting arrows at the towers and trying to destroy it with fire.4 The day before the final attack, the Romans carefully planned how they would conquer Masada. Early that morning, they charged up the ramp, and over the walls. To their surprise, they were not met with a fight. Instead, they encountered thousands of dead bodies. The few remaining women and children explained to them what had happened. The Jews knew they did not stand a chance against the Roman army of 10,000. They decided it would be better to die than to be conquered. Since Judaism does not allow suicide, they came to the conclusion they would have to kill each other. The men first killed the children and women; then they cast lots to decide who would be killed first, and who would have to be the last to commit suicide. It is ironic how they ignored the sixth commandment not to murder, but decided to alter its meaning to mean not to murder yourself. Despite the confusion, they ultimately chose death over slavery.6