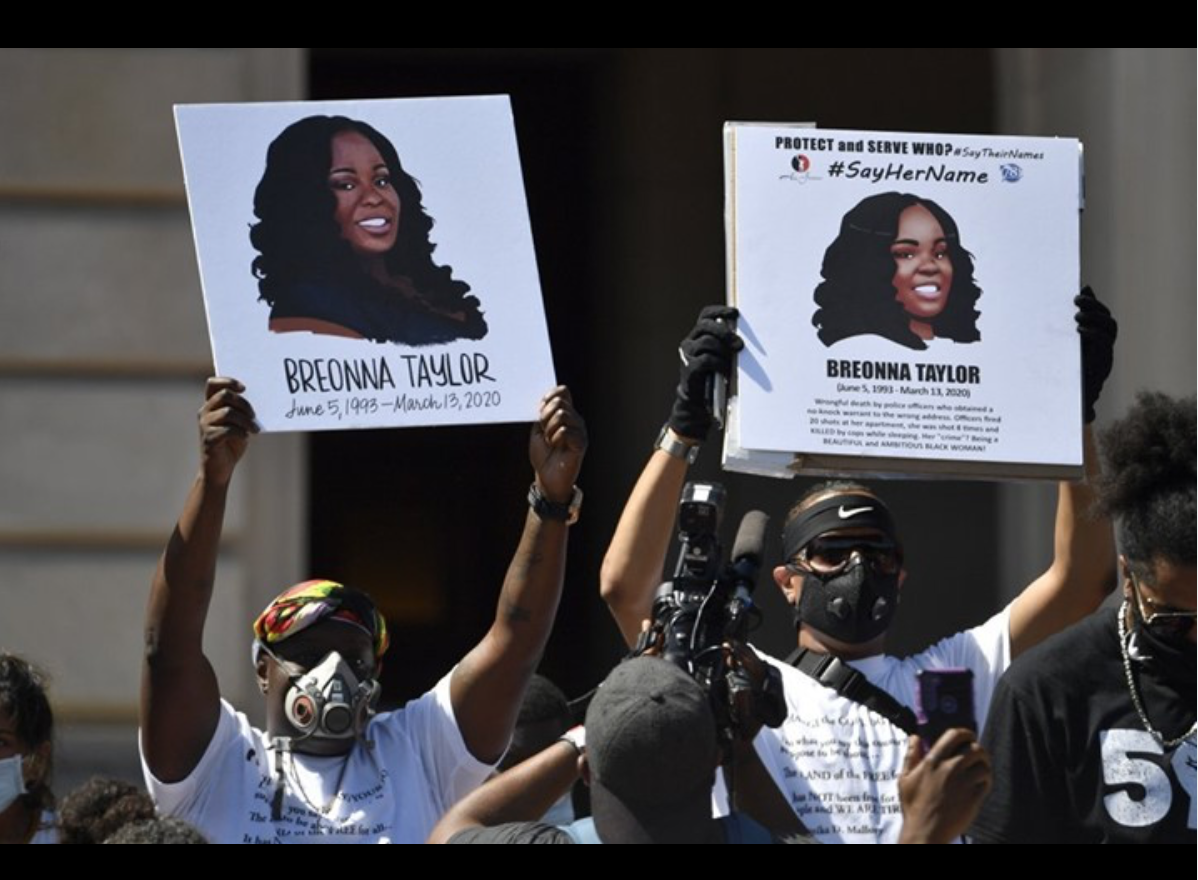 A loud bang on the door ripped it off the hinges, waking Breonna Taylor and Kenneth Walker, in shock, suspecting a break in, Mr. Walker armed

with his licensed gun, jumps to the living room alongside Ms. Taylor. Mr. Walker fired a warning shot, when facing several armed persons, the bullet hit one of the intruders. Within a split second the plain clothed officers fired a barrage of over 20 bullets, among which at least 8 struck Ms. Taylor.1 Breonna Taylor, an Emergency room technician in Jacksonville, laid in her apartment gargling blood and gasping for air, none of the officers provided her any medical assistance. Excessive use of force by law enforcement agents and disregard for the lethal consequences, adds to the growing pattern of cases of human rights violations by Law Enforcement Agents in the United States. This is the everyday reality for Black and brown people across the United States of America. The Black Lives Matter campaign continues to fight the mounting death toll of Black People. Along with George Floyd, the Breonna Taylor case leaves no uncertainty in the level of violations and disregard for Black lives. How could the police go to a wrong address and force their way in? And leave an injured bystander to die without any assistance. Taylor was legitimately in her home where her boyfriend had the right to defend them with his licensed handgun. Once injured, the minimum responsibility of the police was to render aid to Taylor until EMS arrived on the scene. Instead she died from police indifference.

Police records convey Taylor was not the main target of the police investigation the night she was killed by a rain of bullets. Rather the focus was on Jamarcus Glover, Taylor’s ex-boyfriend. The two had maintained a “passive” relationship according to Taylor’s family. Detective Joshua Jaynes prepared an affidavit to obtain a search warrant for Taylor’s home in which he wrote, in January he saw Glover leave her apartment with a package from USPS prior to driving to a “known drug house” more than ten miles away. In addition, Detective Jaynes wrote he verified Glover was receiving packages at Taylor’s apartment “through a US Postal Inspector.” Subsequently, a judge signed off on the warrant, including a “no knock” provision which permitted officers to enter Taylor’s home without identifying themselves.2 Postal inspector Tony Gooden told WDRB News, that in January a different agency had asked his office to look into whether Taylor’s apartment was receiving any suspicious mail. After complying with the request, his office determined there was no suspicious mail. Gooden said, “There’s no packages of interest going there,” in an interview with WDRB News.3 Gooden’s disclosure raises concerns about the Louisville police department’s justification for a warrant which was granted based on misleading information provided in the affidavit. The day prior to the raid, the detective asked the judge for the warrant partly claiming a postal inspector verified that Glover was receiving suspicious packages at Taylor’s address.4

The attorney representing Taylor’s family said “This revelation validates what we already knew: This young woman was brutally and unjustifiably killed by Louisville police, who supplied false information on the warrant they used to enter her home unannounced. Gooden further stated that ‘no packages of interest were going there.’ We will continue to demand transparency from the Louisville police on behalf of Breonna’s family.”5 The police raid found no drugs or cash at her apartment. In fact, that same night, the suspect the police were looking for had been taken into custody from a location across town.6 Lackadaisical surveillance failed to reveal Mr. Walker was spending the night in the appartment, thus the officers expected to find an unarmed woman alone.7 Choosing not to follow their own rules of engagement, along with failure to comply with routine safety procedures, such as making sure an ambulance is stationed outside of any major raid operation, cost an innocent woman her life. Her Name is Breonna Taylor. If many of these details are uncontested then why is it still so hard to get some accountability?

The Taylor family, along with athletes, celebrities, and ordinary citizens took their protests to the streets to call for justice. The National Basketball Association, under pressure from their players, began allowing justice slogans to replace names on jerseys. In fact, after the restart of the NBA season, the 2019-2020 season focused on using the NBA platform to shed light on social justice issues brought to the forefront by the Black Lives Matter movement and the Say Her Name campaign.8 Overnight many of the jersey backs stated “SAY HER NAME”. Millions of people use social media and the #sayhername to spread awareness about the needless killing of Breonna Taylor and so many other victims at the hands of police officers. The #SayHerName campaign was created in December 2014  by the African American Policy Forum (AAPF) and the Center for Intersectionality and Social Policy Studies (CISPS). The goal of the campaign is to include women in the national conversation about race and policing and bring awareness to the invisible names and stories of black women and girls who have been victimized by prejudice police.  Women who have been gratuitously killed, like Breonna Taylor, are mentioned by name in relation to the Black Lives Matter campaign. However, other women: Michelle Cusseaux, Kayla Moore, Tanisha Anderson, Sandra Blend, and Atatiana Jefferson purposefully naming them, are often left out of the the lists of names. The United States has often boasted its status as a leader in protecting human rights, but many minority groups on the receiving end of discrimination and police brutality do not feel that way. “Life, liberty and the pursuit of happiness” provide the fundamental pillars of this country’s support for human rights. However, for citizens of color this is merely a facade for a country that continues to disenfranchise and brutally kill minorities in disproportionate numbers. African Americans account for less than 13 percent of the United States population, yet they are killed by police at more than twice the rate of White Americans.9 These incidents of human rights violations have not gone unnoticed by the international community. International concern grew following George Floyd’s death, the UN Human Rights Council convened to adopt without a vote resolution 43/1. The resolution is aimed at protecting the fundamental freedoms and human rights of African people against excessive use and human rights violations by law enforcement.10

Despite the great national efforts of many, on September 3rd, 2020, Kentucky Attorney General, Daniel Cameron reported two of the three officers, Jonathan Mattingly and Myles Cosgrove, were not charged with any wrong doing by the grand jury. No longer an officer, Brett Hankison was charged with three counts of first degree wanton endangerment for firing bullets that entered a neighboring apartment, to which he pleaded not guilty. No officer was charged for causing Breonna Taylor’s death. This is because police officers, like ordinary citizens, have the right to defend themselves. Since Kenneth Walker fired the first shot, the police officers have claimed they fired back in self defense. However, if an ordinary citizen were to break into another person’s home with a battering ram at 1a.m., the citizen would be considered the aggressor. Thus, the citizen would have no right to a self defense claim. Since the police officers had obtained a warrant, even one based on false premises, it prevents from legally defining them as aggressors.11 The city of Louisville announced a 12 million dollar settlement along with changes in policing following a wrongful-death lawsuit filed by the Taylor family. Despite the case coming to a close, the FBI’s Civil Rights Division continues to further investigate “all aspects” of Taylor’s death.12

Kentucky Attorney General, Daniel Cameron, has been under extreme scrutiny. Released evidence has raised questions about the evidence Cameron’s office used in its presentation to the grand jury. The NAACP Legal Defense and Education Fund has declared Cameron’s presentation to the Breonna Taylor grand jury showed an “inappropriate bias” for the police officers who fatally killed her. The NAACP report states Cameron’s office did not present evidence that could have incriminated officers, disputed the validity of the search warrant, and left no doubt to the grand jury to consider homicide charges.13 In addition, an anonymous juror revealed Cameron had distorted the jury’s case to the public and that the jurors were never given the option to indict officers Mattingly and Cosgrove.14 Despite these new revelations, it is difficult to say whether they will have made a difference in the outcome of the case. However, what remains is that an innocent black women was shot and killed due to irresponsible policing and still no accountability for her death. Black people across America are truly afraid of the police, who are supposed to protect them, because of countless cases like these that make their nightmare all too real. Until the policing institutions unite to change how Black and Brown citizens are treated, and follow proven effective actions, policing will reproduce the racial discriminatory system that costs unnecessary lives at the hands poorly trained law enforcement without any accountability.