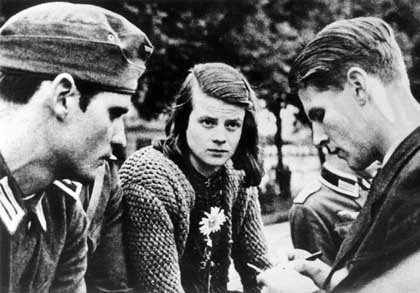 Have you ever thought, why didn’t anyone try to stop Adolf Hitler? Were any Germans ever against him? Was the German community aware of the harm that Hitler was causing to innocent people? Indeed, there were. But who were the people behind these courageous acts? A group of college student attempted to stop Hitler and his heinous acts against Jews and his betrayal of the German people. In 1942, the group known as the White Rose arose in the streets of Munich, Germany. It was a student resistance movement that was created to expose Hitler to all of Germany. Their acts were believed to portray the true meaning of Christianity. The group made leaflets that contained information about the Nazis and their injustices. The letters were mailed to random addresses all over Germany. These students were willing to do whatever was needed in order to follow their moral duty and stop Hitler and his army.1

Sophie Scholl will always be remembered as one of the key individuals in the White Rose movement. She was born in Forchtenberg, Germany in 1921. She grew up in a religious and very political home. Her father was the mayor of the small town and her mother was a deaconess at their local church.2 Her parents raised her family to live an anti-Nazi life. Sophie was the second of three children. Both Hans and Sophie, like most other young Germans, were a part of the Hitler youth movement. There, individuals would be taught Nazi morals and train for battle. While in the program, Sophie and Hans were exposed to the injustices that were done by the Nazi government.3 Hans, her older brother, and his friends were responsible for starting the resistance movement. They named it after a white rose because it portrayed “purity and innocence.”4

Hans was attending the University of Munich when he started the movement. Along with friends that were also opposed to Hitler and the Nazi regime, they began writing leaflets that denounced the inhumanity of Hitler and his army. They described the Nazis as gangsters and violent criminals.5 After Sophie graduated High School, she followed her brother’s footsteps and attended the University of Munich, where she studied biology and philosophy.6

Sophie was an excellent writer, which played a crucial role in not only writing leaflets but distributing them as well. Not only did the group write leaflets, they spread their beliefs by spraying quotes on twenty-nine different public buildings. Some of the sayings were, “Down with Hitler” and the word “Freedom” on the sides of the entrance of the University of Munich.7 On one very significant leaflet, they exposed the horrendous acts, in which Hitler was responsible for the mass-murder of Jewish people. The group described this as, “the most terrible crime against human dignity, a crime not to be compared to any similar one in the history of mankind.” 8

One night, Sophie had a dream that she and her brother were arrested by the Gestapo. Little did she know that her dream would one day become a reality.

“Our people stand ready to rebel against the national socialist enslavement of Europe in a fervent breakthrough of freedom and honor.” This was the last line of the last leaflet that Hans and his sister would distribute on February 18, 1943.9 While everyone was in class, Hans and Sophie distributed the leaflets around the University. When they were done, Sophie went back and threw a stack of leaflets down a balcony. She was not able to flee the scene fast enough, as a Janitor saw her throw the leaflets down a balcony and went after her and the man beside her, Hans. The janitor stopped the individuals and reported the incident. Later, they were detained and taken to Gestapo Headquarters, where they were questioned. At the time, Hans still had a hand-written letter in his pocket, which incriminated his friend, Christoph Probst. The letter was potentially going to be the group’s next leaflet. Christoph was brought in for questioning. The individuals were detained for four days. They were questioned, and they in turn became victims of the brutality of the Nazi machine. While detained, the Gestapo broke one of Sophie’s legs. The three individuals were found guilty of “high treason,” and four days later were beheaded. The Gestapo did not stop, and they were on the lookout for other people who were involved in the group. It was not until five months after their execution when more members were detained and punished. One of the individuals was a Professor who had helped the group write some of the leaflets; he was later executed as well.10

The members of the White Rose stood up for their beliefs and condemned the horror of the Nazis, including Sophie, who was willing to do whatever was needed to inform others and stop Hitler from committing injustices, even if it meant losing her life in the process of it. They exposed the Nazis to all of Germany and fought to stop Hitler. Sophie Scholl along with her friends will go down in history for their braveness and courage to stop the Nazi regime.