The 1917 Bath Riots: An Untold Story Of The Border 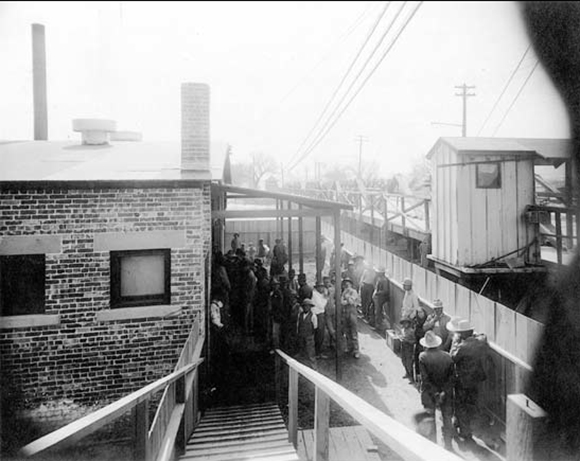 Everyone has a hometown but not everyone can say they are proud of their hometown. Despite El Paso’s tumultuous history, the city is one community made of Mexicans, Americans, and Mexican-Americans that come together in times of need, because it is in adversity that the city that I am proud to call my home grows into a family.

103 years ago in El Paso, Texas, the border changed forever. Before 1917, people from El Paso and Juarez could cross the border freely without a passport. Mike Romo was a resident of El  Paso and in the book Ringside Seat To A Revolution, he recalls how easy it was to cross. “Coming from Juarez across the Stanton Bridge they never asked you for identification. They never asked you for anything.”1 Then everything changed.

The Immigration Law of 1917 required that immigrants at all points of entry had to have a passport, had to take a literacy test, and had to pay an $8 head tax. At the same time, the US public health services published a manual that outlined the “classes of aliens” that should be excluded from the US. The manual included a list of people that were to be excluded, including homosexual people, chronic alcoholics, polygamist, prostitutes, contract laborers, and most notably imbeciles, idiots, and feeble-minded persons.2 The border was never again the free gateway between two countries that was one community. During these times, delousing centers, built in 1916 on the border, were creating a humiliating process for many Mexicans simply trying to get to work. On January 28, 1917, a girl named Carmelita Torres started a riot that would cement her name in the history for years to come.

Due to deep rooted xenophobia after the Mexican Revolution and the anti-foreigner sentiment coming from the US entering into WWI, the Mexican people were treated horribly as they continued to live their lives crossing to work in the US. In 1916, the mayor of El Paso Tom Lea sent letters to Washington officials for months asking for the ability to quarantine all Mexicans at the border for 10 to 14 days, to make sure they were free of typhus before being allowed into the states. The mayor kept persisting even though he was told by Dr. B. J. Lloyd, the local public health official, that typhus was not a serious menace to the civilian population. Despite this, according to John Burnett, journalist for NPR, Dr. Lloyd echoed the mayor’s racist language and suggested the deployment of delousing centers, stating that he would “cheerfully bathe all the dirty lousy people coming from Mexico.”3 Thus in 1916, the delousing centers were born.3

In these delousing centers, Mexicans were forced to go through a toxic and dehumanizing process. It began in a facility called “the gas room,” where they were forced to strip naked, and hand over their clothes, which were put in steam dryers that would melt their shoes. They had their clothes fumigated with Zyklon B gas, the same chemical used later in Germany to kill millions of people. According to Raquel Reichard, journalist for We are Mitu, the El Paso gas chambers were not just reminiscent of the gas chambers of WWII; they were the inspiration for them. In 1937, a German scientist pushed for Zyklon B to be used in the German gas chambers, citing El Paso’s use of the chemical with pictures as evidence.5

After this, they were inspected for lice even in their pubic hair. If any were found, they would be forced to bathe in a mixture of kerosene and vinegar. They would then be forced to shave their heads. For women such as Carmelita, American soldiers would take pictures of them naked and put them up in local bars in El Paso. After this process, they received a ticket that showed that they were “clean” for eight days; then they would be forced through the process all over again.6

During these humiliating processes, there was also a looming fear of being killed. On March 5, 1916, prisoners in the El Paso City Jail were told to strip naked and douse their clothes in a mixture of gasoline, creosote, and formaldehyde. The prisoners themselves had to go inside a mixture of gasoline, coal oil, and vinegar. Around 3:30 pm, someone struck a match that set the entire jail ablaze. Fifty naked prisoners were caught in the fire, twenty-seven of whom died as a result. Nineteen of the twenty-seven were Mexican citizens, one was an African-American man, and the other seven were homeless Anglo people. This event became known as the Jail House Holocaust. The mayor of El Paso announced that the whole thing was an unavoidable accident, and after an investigation, no one was held liable for the death of twenty-seven people. The El Paso Herald put it nicely: “Apparently no one could be found to fix the blame on the city for the death of 19 Mexicans a few white transients and a negro.” After this incident, every Mexican that crossed the border now carried the fear of being burned to death.7

Finally, in January of 1917, Carmelita had had enough. On the morning of January 28, 1917, Carmelita crossed at the Santa Fe Bridge to El Paso just as she did everyday. The seventeen-year-old girl was a maid who cleaned houses for American families in El Paso. At 7:30 in the morning she was told to get off the trolley she was on to take a gasoline bath. She refused. Instead she got off the street car with thirty other women and protested the humiliating process. Within the hour, two-hundred women joined her and blocked the traffic in the street, and by noon, thousands of people were rioting in the streets. Many of them laid down in front of the tracks of the trolley cars. They yelled and threw rocks at the people who had been humiliating them and filling them with fear every eight days for over a year. Several people were killed. It took two days and many Mexican and American troops to quell the riot, and Carmelita was arrested.8

Carmelita Torres was described by the El Paso Times as an “auburn haired Amazon” that started all this commotion just because a bunch of Mexicans didn’t want to take a bath.9 Other newspapers referred to her as the leader of an anti-American riot.10 Today she is seen as a Latina Rosa Parks. In reality, she was a young woman tired of the injustice she was treated with. Unfortunately, all trace of her was lost after the riot, and most likely she was killed with the others.

Despite her best efforts, the delousing process only got worse. In the next few years, agents added DDT to the fumigation process, spraying the now-banned chemical in the faces and genitals of many Mexicans.11 It wasn’t until the 1960s that the delousing process was recognized as dangerous by public health officials and the practice was ended.

Today there may not be a delousing center in my hometown anymore, but what has been put in its place is an area of separation, where families, migrant workers, and asylum seekers await to be inspected and declared suitable for entry. In a hearing before the subcommittee on border security, the honorable Kathleen M. Rice, a representative from New York, spoke about her trip to El Paso. In El Paso, she met with workers of ICE as well as representatives from The Annunciation House, which is a non profit that helps those seeking asylum. She talks about the hazardous treatment of thousands of asylum seekers in the El Paso Processing Center, which is remarkably similar to the delousing centers of the past.12 This makes me ask the question, are we as a nation simply finding new ways to deny passage to a country founded by immigrants, or are we one day finally going to understand each other and welcome each other as human beings?