The Dalton Gang won’t Ride Again: The Coffeyville Raid of 1892 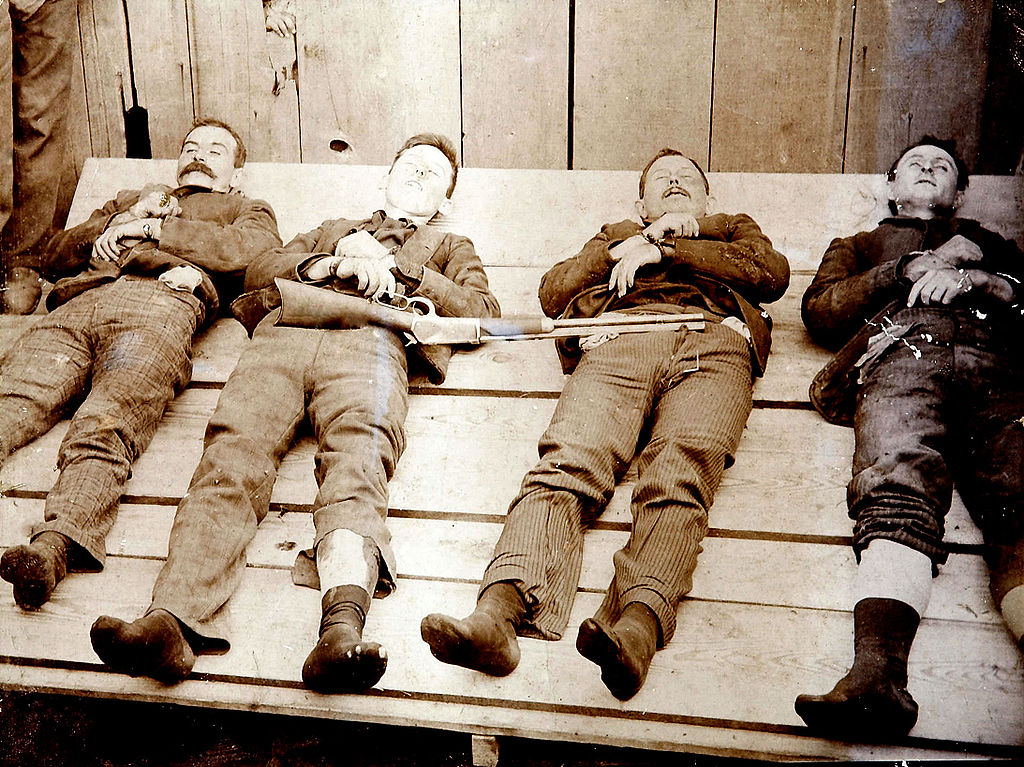 It was October 5, 1892. Three men wearing fake beards and wigs stood inside the C. M. Codon & Company Bank of Coffeyville Kansas, brandishing their revolvers and rifles at the cashiers and the patrons of the bank. They were forced to wait as the time lock for the safe was disengaged. As they waited, they wondered if their partners in the First National Bank across the street were faring any better in their endeavors. This thought was answered by the roar of gunfire from outside; buckshot and rifle bullets shattered the plate glass windows and filled the air of the bank. Two of the men, Dick Broadwell and Bill Powers, responded in earnest with gunfire of their own. The third man, Grat Dalton, began to search for a rear exit, hoping to find an escape for his crew to their hitched horses. In the other bank, brothers Bob and Emmet Dalton were able to get a few thousand dollars before coming under fire themselves. These attempted bank robberies had just become shootouts.1

With the completion of the transcontinental railroad in 1869, money and resources began to flow into and out of the American west. Many men began to form gangs to capitalize on this, making their fame and fortune from stealing from the trains and stagecoaches transporting these valuables. These gangs would eventually begin robbing the banks whose money had been on those stagecoaches and trains, for a more dangerous but higher payout. These gangs are the ones we are most familiar with today, like Jesse James’ James-Younger gang, The Doolin-Dalton Gang, and Butch Cassidy’s Wild Bunch. Many smaller gangs, wishing to be infamous in their own right, set out to outdo what these gangs had done (especially Jesse James’ gang) hoping to have themselves spoken about in hushed tones in saloons and remembered as great outlaws. Bob Dalton’s Dalton Gang was one such organization.

The Dalton gang was made up of brothers Grat, Bob, and Emmet Dalton, and later Dick Broadwell and Bill Powers. They started out as lawmen in the early days of the Oklahoma settlement, as Bob was appointed to be the chief of the Indian police of the Osage Nation; and despite being lawmen, they still saw fit to begin a minor horse-theft operation in 1889. Soon they were discharged from their positions as officers of the law, and they then decided to continue expanding their horse-theft operation as well as begin a series of small time robberies, starting with gambling houses, trains, and small banks.2 Bob Dalton, however, had bigger plans for his gang, wanting to cement his name in history. He wanted to “outshine” the outlaw Jesse James, and the way he imagined he could do that was by simultaneously robbing two banks, since not even Jesse had had the gall to attempt that.3

On October 5, 1892, Bob Dalton and his gang rode into the town of Coffeyville Kansas, wearing fake beards, goatees, and wigs to hide their identities from the townsfolk, because the Dalton brothers had actually grown up around Coffeyville. This did little to hide them, however, as many townsfolk recognized the brothers and became suspicious of them immediately, as they had become relatively well-known outlaws.4 As the members of the gang made their way to the banks, the people of the town began to arm themselves at the local hardware store in anticipation of fighting the would-be robbers. The gang split up, with Bob and Emmett taking the First National Bank and Bill Powers, Dick Broadwell, and the last brother Grat taking the Codon C. M. & Co. Bank across the street. While Grat, Dick, and Bill proceeded to hold up the cashier with one of their rifles, a man saw the gang in the Condon Bank and ran to the general store to alert the men inside that the Condon Bank was being robbed. At around the same time, a few gentlemen witnessed Bob and Emmet “holding up” the First National Bank, and went to alert other townsfolk.5

While the Outlaws were inside the banks, Bob and Emmet were filling up a sack with some twenty thousand dollars, but Bill, Grat, and Dick had run into a problem.6 According to the cashier Mr. Ball, the bank’s safe was locked by a time lock and could not be opened until 9:30 AM, which meant that they would have to wait another ten minutes before they would be able to access the banknotes and silver within. This, however, was a lie, as the bank’s safe had no such lock; this was simply a plan to stall the robbers. In actuality, Mr. Ball made up a time for the supposed lock, then guessed what the time was; and had the robbers known the time, they would have attempted to open the safe immediately, as it was actually already 9:40 AM.7 During this time, the town had fully armed itself at the local hardware store and was ready to make their attack.

The shooting began at the Condon Bank, with the townspeople firing rifles and shotguns at Bill, Dick, and Grat, and Bill and Dick firing back while Grat tried to find an exit. As he found no exit, Grat and his partners took all the bank notes they had gotten, leaving behind the silver, and attempted to leave the bank from the entrance they had taken to get in. The townspeople continued to fire on the bank, but none of the bankers or patrons were harmed.8

At the First National Bank, Emmet and Bob had accumulated a rather hefty amount of money and were attempting to leave through the front door of the bank, but were fired upon from a drug store across the street. After that, they elected to exit by the rear door to the alley. As they left, Charles T. Gump, a local man who had been driving his wagon through town moments prior, attempted to cover the exit of the bank with a shotgun, but he was quickly shot by Bob Dalton, tearing apart his hand and making him the first victim of the Coffeyville raid. With this, the entire gang made its way to the alley where they had hitched their getaway horses.9 In the alley behind the First National, another man approached Bob and Emmet, carrying a small revolver at his side. Both Bob and Emmet leveled their rifles at him and ordered him to stop, but he continued his approach. Bob exclaimed that he would “have to get that man” before firing at and killing Lucius Baldwin, marking the first actual death of the raid.10 Another man, Geo Cubine, was seen holding a rifle in the doorway of a drug store when members of the Dalton Gang opened fire on him, killing him as well. Mr. Cubine’s friend, Charles Brown, found his body and took Cubine’s rifle, prompting more fatal shots from the Daltons, becoming the third man to die. One of the cashiers from the First National, Tomas Ayres, ran to the hardware store and grabbed a rifle before getting into position ahead of the Daltons. Unfortunately, Bob Dalton saw Ayres before Ayres saw him, and Bob took his life.11 By this time, the Dalton gang had entered the alley that adjoined the one where their horses were hitched, and escape was within their grasp.

Grat, Bill, and Dick, however, had no such luck. Almost immediately after leaving the Condon Bank, they came under fire from Mr. Isham (owner of Isham’s hardware, the hardware store that supplied the townspeople with firearms and munitions) and other townsfolk. Grat and Bill Powers both sustained mortal wounds, Powers dying moments after climbing onto his horse and catching a rifle bullet in his back. Grat made it to a barn near the gang’s horses, where he ran into Marshal Connelly, one of the lawmen of the area. Grat was behind the man and seized the opportunity to shoot him in the back, killing him. Moments later, Grat succumbed to his wounds.12 Dick Broadwell had also been injured and had reached cover in a nearby lumberyard, seeking a moment of respite. After Bill and Grat’s death, there was a lull in the gunfire that Dick tried to take advantage of. He ran to his horse and attempted to ride out of town, but not before he was hit with a rifle bullet and a load of buckshot in the back. He stayed atop his horse until he had left town; later he was found a half mile outside of Coffeyville, lying dead on the ground near his horse and belongings.13

At this point, only the brothers Emmet and Bob remain alive, and they had just entered the alley near where they had hitched their horses. Then the men at Isham’s hardware store had a clear view of the two men, took aim, and fired at the leader of the Dalton gang. Bob was hit and staggered around the alley, sitting down upon some stones, where he attempted to fire at his attackers, his wounds significantly diminishing his marksmanship. He then stood up and continued his firing, before another bullet found his chest and he fell to the ground.14

Emmet was still unscathed, clutching the twenty thousand dollars and mounting his horse. He too was struck by two bullets, one to the leg and another to the arm, but he refused to leave behind the money or his brother Bob. He rode around to Bob and outstretched his arm to bring him aboard his horse, when Bob replied “It’s no use.” As Emmet hunched over the side of his horse beckoning his brother, one of the men in the town unloaded both barrels of his coach gun on Emmet’s back, filling it with buckshot. Emmet and the money fell near Bob, who died moments later.15

Remarkably, Emmet survived the wounds and was treated by the town’s surgeon rather than being lynched immediately, as was the norm of the time. His gang was responsible for injuring and murdering many members of the town and he would have to answer for it. Emmet was sent to the Kansas State Penitentiary for a life sentence, but was paroled only fourteen years into his sentence. He then moved to Hollywood to use his history as an outlaw as a way to get a position as a screenwriter before dying in 1937 at the age of 66.16

Although Bob’s plan to “outshine” Jesse James wasn’t successful, and he didn’t even survive the attempt, the Dalton’s Coffeyville Raid is still one of the best known bank robberies in history, and in a way, Bob Dalton did have his name remembered, albeit at a high cost.