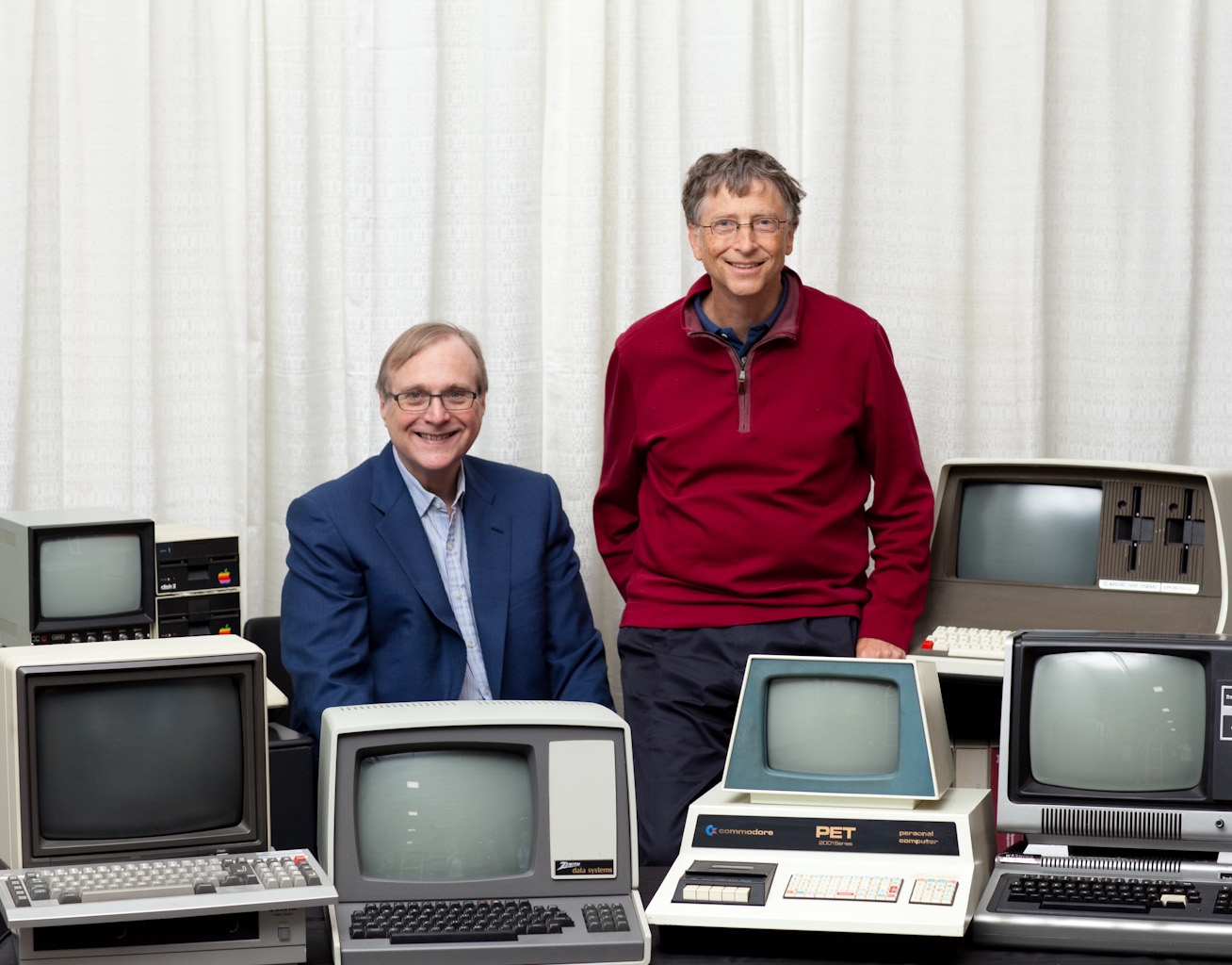 Everyone knows Microsoft because it is everywhere. We see it advertised in commercials, we see their stores in the malls, and we use their computers or phones every day. In addition to seeing its products everywhere, many of us know that the founder of Microsoft was Bill Gates. However, something that most are not aware of is how and when the company came to be in the first place. Did you know that Bill Gates was not the sole founder of the mighty Microsoft? In fact, in 1975 Bill Gates co-founded Microsoft with the help of his childhood friend, Paul Allen.1 This is their story.

At a young age, Gates was very smart. He even wrote his first computer code, a tic-tac-toe game, at the age of thirteen.2 His mother recognized his talent and decided to take him out of public school and put him into a private school, Lakeside School in Seattle Washington where he was in the class of 1973. It was there that Gates met his friend, and later co-founder, Paul Allen.3 Allen was two years older than Gates, and they soon became friends due to their common interest in computers. Allen was always interested in science and eventually that led him into becoming more interested in computers.4 Allen was most knowledgeable in computer hardware while Gates was more interested in the software aspect, which made them a pretty good team that could learn from  each other.5

After they got to know each other at school, they became closer friends during the time that they spent in the school’s computer lab. In 1968, the mothers of students in the school held a fundraiser so that they could purchase computer time on a mainframe DEC PDP-10, owned by General Electric.6 Both of the boys were very good with computers and programming. Gates and Allen contributed to the majority of use of all of the allowed computer time because they both enjoyed it so much. Because of how much time they had been using up on the computer, Lakeside made an agreement with Computer Center Corporation (CCC) so they could continue to provide computer time to their students.7 The two were so knowledgeable that at one point they were even banned from going to the computer lab, because they were both caught taking advantage of software glitches in order to gain more free computer time than the company provided.8 They both eventually got their privileges back, only because the CCC hired them to find any other bugs in their system in exchange for unlimited computer time. However by 1970, CCC had gone bankrupt, which meant that the boys had to find another place to continue to work with computers. Luckily, Allen’s father worked at the University of Washington, so they gained access to computers there.9

In 1970, Gates and Allen developed “Traf-o-Data,” which was a computer program that monitored the traffic patterns in Seattle. This was the pair’s first real taste at a successful business and it let them know that they wanted to create a business. In 1971, Allen graduated from Lakeside and went on to study at Washington State University, but not without staying in contact with Gates. A year after Gates started school at Harvard University, in the Fall of 1973, Gates and Allen heard about the Altair 8800. Because the Altair 8800 was so popular in the market and was one of the biggest selling computer items, the pair knew that if they wanted to make it big in the computer business world, they would have to write a program for the system. So the two called the computer’s manufacturer, Micro Instrumentation and Telemetry Systems (MITS), telling them that Gates had created an operating language specifically for their Altair 8800. However, what MITS did not know was that Gates had not actually created any type of system for the Altair, but he did want to. The reason they did not actually have a product is because both Gates and Allen did not really expect MITS to agree to work with them or pay any attention to them at all, but they knew they needed to try. To their surprise, MITS did actually show an interest in what the two were offering, and its president, Ed Roberts, decided to give the boys a chance, and requested for them to set up a demonstration of the system so he could see if their system was worth paying for.10

Gates and Allen, surprised by MITS’ interest, ignored all of their school work, and spent the next four weeks frantically working on a system that they had claimed they had already created.11 They ended up creating a “BASIC interpreter” specifically for the Altair 8800 minicomputer, which was just a simple, interactive computer language and interpreter that could execute a source program by reading it one line at a time and performing the operations immediately.12 This was the step that Gates and Allen needed in order to turn their business idea into a real thing. Shortly after this, in January 1975, Allen was hired at MITS, and in November 1975, Gates quit Harvard University to work with him. Together they founded Micro-Soft, which was a mix of “micro-computer” and “software,” but they would end up dropping the hyphen within a year.13 “We had the world’s first company that wrote programs for microcomputers,” Gates stated.14

Business then started to pick up a bit. In 1976, Microsoft developed the 6502-based BASIC for the Commodore Personal Electronic Transactor and then sold the code to Apple. Then, in 1977, Applesoft BASIC was licensed to Apple, which allowed for the development of business-oriented applications. By November of 1977, Microsoft had grown so big and popular that they were able to open up its first international office in Japan. By the end of December 1977, Microsoft’s sales exceed $1 million and they introduce the Common Business Oriented Language-80 (COBOL-80), which was designed for and became a big part of business use.15

In 1979, International Business Machines (IBM) announced its plans to market a personal computer that the everyday person could use in their home and small businesses could use to power their business needs. So IBM approached Microsoft and asked if they could develop a standard operating system for their home computer models. Gates and Allen agreed to do the job and they went out and purchased a Q-Dos operating system for $50,000, which was originally developed by Seattle Computer. Q-Dos, or Disk Operating System, was compatible with the Intel processor that IBM had intended to use. The pair adapted the Q-Dos system into the MS-DOS, or the Microsoft Disk Operating System, and presented it to IBM. Gates had learned, early on, the necessary skills needed to make it in the software business. So when Microsoft was asked to create this software, Gates insisted that IBM make Microsoft the exclusive software licensee for their home computers. This meant that all of the IBM products would be required to have the Microsoft operating systems. In addition to that, Gates also negotiated a contract that allowed Microsoft to retain the right to manufacture and license its software to other manufacturers. This stipulation allowed for a large portion of the industry to be controlled by Microsoft, because there were only three other operating systems for microprocessors at that time, Microsoft, Apple, and Intel.16 Ultimately, it was this deal with IBM that launched Microsoft into the big leagues, as IBM personal computers set the standard for both personal and business applications worldwide.

Microsoft became one of the most known names in the computer world. Thousands of businesses around the world were buying the technology that Microsoft offered, which helped boost their profits tremendously. Gates said that he never thought that “it would ever be a large business,” but the proof was shown by their technology being sold over and over again by the millions.17 The software was selling worldwide, not just in America. In fact, by 1979, almost half of the business was coming from Japan.18

However, there was a downside to Microsoft becoming such a big phenomenon so quickly. Because it was so popular and in demand, many people knew that they could make money by selling Microsoft’s software themselves. Users were stealing Microsoft’s software, making multiple copies of it and then spreading it around to other computer users.19 Despite this stealing of software, Microsoft’s sales were actually not that affected, meaning that their sales were still going strong.

From then on the company began to grow and grow until it became what we know today. Microsoft is now a huge multibillion dollar corporation that many people around the world are aware of and still use to this day. The profits of Microsoft made Gates the richest man in the United States, with a net worth coming in at around 86 billion dollars as of 2017.20 He even owned “711,749,300 shares of Microsoft stock” in 2001.21 Microsoft benefited Allen as well. He became very wealthy, although not to the extent that Gates did.

Thanks to the genius of both Bill Gates and Paul Allen, there is now a worldwide known company and a huge advancement of the computer systems industry from where it started. Who knows where the advancement of technology would be today without the help of Gates and Allen combined.