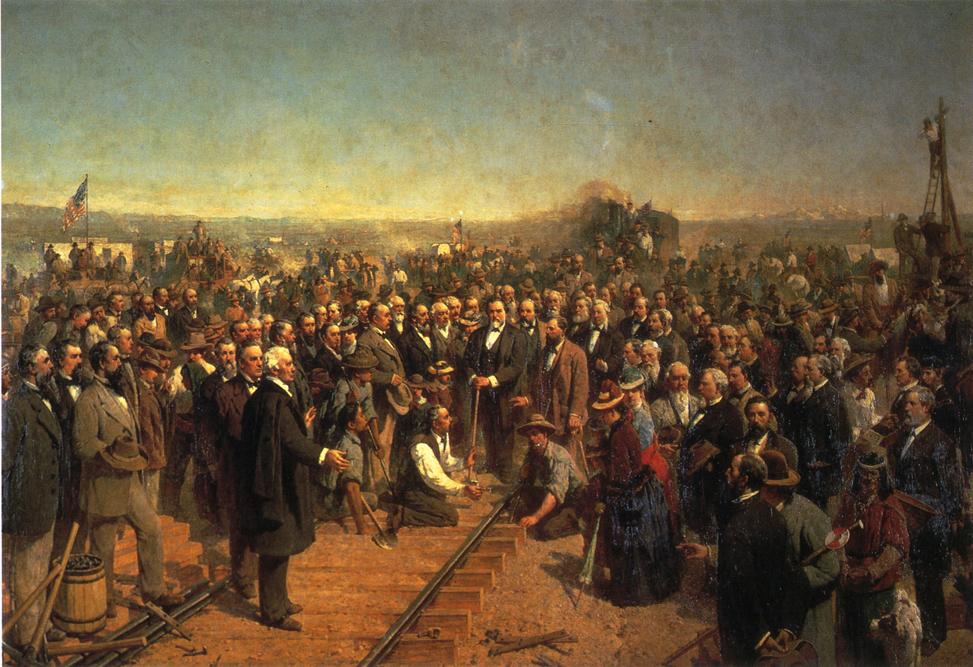 The first transcontinental railroad was 1,912 miles long, and was built to connect the east and the west coasts of the United States. It was commissioned by Congress in 1862. In the 1850s Congress saw that an effective rail network connecting the east to the west was needed to help with the rapid westward settlement. Before the Civil War, Congress needed to find the best route to the Pacific, so it commissioned a number of surveyors. Both Northern states and Southern states wanted the route to begin in their regions, which kept the Senate from being able to pass any legislation on the transcontinental railroad until the Southern states seceded from the Union in 1861. With the absence of Southern legislators from Congress, the northern route to the Pacific now met with little opposition. On July 1, 1862, the Pacific Railway Act became law and it offered incentives to men who were willing to help develop this first transcontinental railway. The two railway companies that were authorized to construct the rail network was the Union Pacific and the Central Pacific Railroad Companies. They were given government bonds and vast land grants.1

The Central Pacific was founded in 1861 by a group of California merchants known as the big four:  Collis P. Huntington, Leland Stanford, Mark Hopkins, and Charles Crocker. They were best known for building the part of the transcontinental railroad that started in Sacramento, California, with Huntington representing the company in the East, handling the financing and purchasing aspects, and acting as a lobbyist. Crocker was in charge of the construction aspects, and Stanford, who was the governor of California in 1862–63, saw to the company’s financial and political interests in the West. To see to their need for labor, they employed thousands of Chinese laborers who made up between 80-90% of the Central Pacific work force, to work their way through the Sierra Nevada mountain range to meet the Union Pacific on the other side.2

With the Central Pacific building from the west, the Union Pacific was building from the east to meet up with them. The Union Pacific was incorporated by the Pacific Railway Act as well. It built 1,006 miles of track westward from Omaha Nebraska to meet the Central Pacific in Promontory, Utah, on May 10, 1869. Federal loans and land grants largely financed the company, like the Central Pacific, but the Union Pacific became embroiled in scandal when its financial branch, the Crédit Mobilier, was discovered to have individuals amassing enormous amounts of profits at the public expense. After discovery of this scandal of government funds, it almost destroyed the company. It still had a huge amount of debt in 1893, when it went under new ownership.3

Despite the scandal, the first transcontinental railroad was finally connected at Promontory, Utah on May 10, 1869 with an elaborate ceremony. Thomas Durant of the Union Pacific and governor Stanford of the Central Pacific took turns hammering the final “golden spike” into the ties that united the railways. As the celebration ended and the railroad was open for business, the impact was felt immediately as the travel time between the east and west was dramatically reduced from a few months to a simple week or less.4 The impact that this had on the United States was significant. It shortened the travel time and expanded interstate trade. It helped to spread ideas, and it also helped spread American culture, as the American people saw manifest destiny take on a very real form.

This article talked about the good of the railroad and what it took to build it but there was also a lot of bad that came from it. Chinese were exploited for cheap labor and with the expansion of the railroad came the further decline of the Native Americans. I do like that the article took a different perspective on the difficulties of building the railroad with things such as the scandal and if it were not for the Civil War it may have never happened and set the development of our country back.

I find the Transcontinental Railroad extremely interesting. Just imaging the fact that there was now engine based transportation during the late 1800’s is intriguing to me because automobiles were not invented during this time. However, the idea of travelling from one location to another in a matter of hours instead of days, or even weeks, is astonishing. This is the equivalence to air transportation today. Furthermore, just knowing that the idea of trains and railroad tracks dates back as early as the late 1800’s is just amazing and shows what the Unite States is capable of accomplishing in the future, such as space travel in the 1960’s.

Well during this time, I can just imagine how exciting and scary this must have been. The idea of faster travel must have seemed really fascinating, but what I get astounded by is that such inventions were created. Such accomplishments are a whole other world for me because I could never imagine sitting there and designing intricate systems and inventions. To say that the impact it had on the United States was significant I feel like is a bit too humble, it basically revolutionized transportation at the time.

The pictures in this article are incorrect, the photo of the “big four” are actually the leaders after World War One not the four from the transcontinental, the farthest one right is President-of-the-time Woodrow Wilson, if someone or the author could revise and check these things, and not to be rude but not all of the words in here are being used correctly, hats off to whoever corrects it.

The Transcontinental Railroad is one of the most important projects of the United States during the Industrial Revolution. More jobs and inventions were happening at that time; therefore, many immigrants were migrating to the United States for better jobs and higher income. President Monroe’s Doctrine mentioned the idea of Manifest Destiny, declaring to the United States that it is time to build and make more for sustainability and profit. Therefore, the Transcontinental Railroad became a huge part of the United States, because it is historically remembered for making more jobs, easier transportation, and the honor of migrant workers for building the tremendous railroad.

This was a very informative article on the first transcontinental railroad. I did not know that when the railroad was first being built, there was a scandal that saw the Central Pacific company almost go out of business. It is great that the transcontinental railroad was built, because it was more convenient for people in terms of travel time and the railroad expanded interstate trade.

This was one of the most important events that happened in history that should be talked about and taught more often in our history classes, considering this was the main start of the Industrial Revolution. Especially the scandal that happened. It was interesting that many people tried to take profit from the public but I thought it should have been expanded on more in the article.

Nice article. The construction of the first transcontinental railway in the United States. It is funny that the legislators of the Union waited until the civil war so they could build a railway that did not include any of the Southern rebel states. It is really cool that the railroad had such a huge impact in such a short amount of time. It reduced travel times and also increased interstate commerce. Technology can have incredible impacts.

Fantastic article, I remember learning about the transcontinental railroad in middle school and amongst all of the other kids laughing and messing around I was intrigued by what my teacher was saying. Talking about the first transcontinental railroad built for faster transportation is amazing. Its crazy to look back and see the progress we’ve made in the last 150-200 years. In the mid 1850’s we had horses and carriages, then to the first mobile car, to the slow invention of trains and more modern cars like we have today. Although we don’t have flying cars like back in the future predicted would happen in 2015 but we do have new Tesla’s how we can literally charge our cars at certain stations around places. Which I think is a step in the right direction. We have made a lot of progress in the past 200 years.

This was a great article. When I was little I played a game about the construction of the Transcontinental Railroad. What I had never heard of before was that two different countries built the railroad. I knew that it started both coasts and worked there way in but I had always thought it was the same company. I also didn’t know that the act got passed because the Southern states left the union.