The History of the Nintendo Game Boy 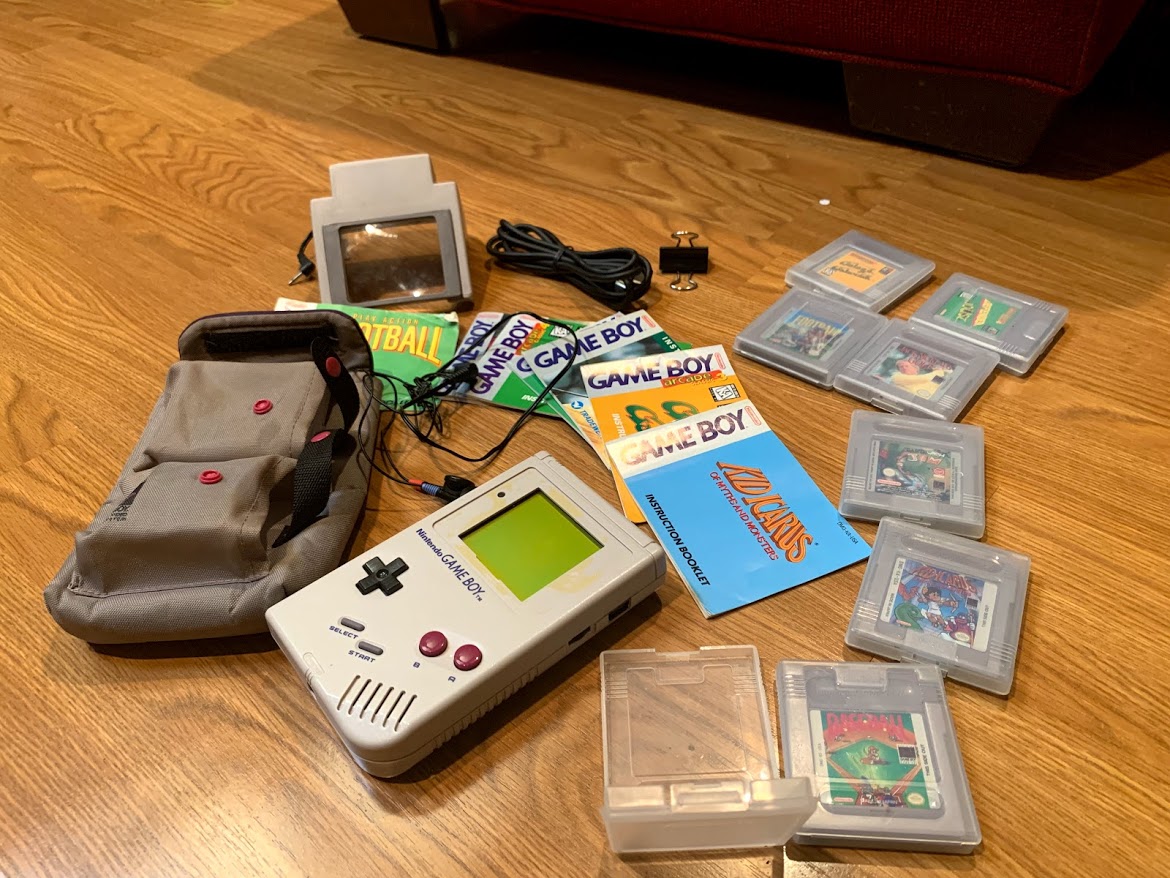 Chances are that at one point or another in your life, you have heard of Nintendo. The company of Nintendo launched in Japan in 1889 as a card game company. However, Nintendo is now a video game company.  As pinball machines gave way to electronic video games, the toy industry sought to take video games into the home with console games that plugged into televisions.  The next step was to be able to take the game along for the ride.  With that in mind, Nintendo created a gaming system then called the Game Boy.1

While there were other handheld video game consoles on the market, the Game Boy was one of the first to feature interchangeable cartridges.  Other handhelds only had one pre-installed game.  In other words, if you wanted to play different games, you had to purchase separate consoles.  My mother’s family talks about going on camping trips with the cousins’ football and baseball handheld video games, which was just about all there was at the time before the Game Boy.  The Game Boy allowed the user to purchase one console and multiple (sometimes hundreds) of game cartridges.  Not only was this a new idea, but it was a very profitable one as well.

Not only did Game Boy users purchase game cartridges, they also bought all sorts of accessories.  Users needed cases to carry their console and cartridges.  They purchased gadgets to magnify the screen.  They also purchased gadgets to use the console in low light conditions due to no backlighting for the Game Boy. And, of course, users sought to upgrade to the next best console as Nintendo continued to develop new products.

Another modification that the Nintendo Game Boy has gone through is having different colors of casing. By 1995, users had a choice of body colors for their Nintendo Game Boys.7 One option included the “Play It Loud” colors.  Play It Loud was a campaign that showed different colors they offered for the Game Boy. The different colors that “Play It Loud! units were manufactured were red, green, black, yellow, white, blue, and clear.”8 The clear or transparent Game Boy, sometimes called X-Ray, could be found in the UK during this time. One source describes, “The most common Game Boy colors included yellow, red, clear and black. The Green Game Boy were fairly scarce but blue and white are the rarest.”9 There were other accessories that Nintendo put out such as a printer and a camera in 1995. They also toyed around with a 16-bit version the same year the printer and camera accessories were out and considered making a touch pad adapter three years after.10

The Game Boy Advanced SP was yet another version of this system, and it was released in February 2003. The Game Boy Advanced SP included a screen that could show pictures in color, a front light which could be used in low light conditions, and a clam shell design to protect the screen from getting damaged or dirty.  The clam shell design was also used in the Nintendo DS, which was released in November 2004.  The Game Boy SP had a rechargeable battery, which took three hours to recharge, provided the user with 18 hours of gameplay without the light on and 10 hours of gameplay with the light on. Compared to the other Game Boy consoles that came before it, the consoles that came after the Game Boy Advanced SP had better, more colorful graphics, gaming mechanics were made more complex by adding voice control and touch screen, and games with more moving parts could be more easily covered.16

The Nintendo Game Boy was not the only handheld gaming console to accommodate various game cartridges, but it was by far the most popular and longest lasting.  Atari and Sega both introduced handheld consoles, but they were not able to innovate to the level that Nintendo could.  Nintendo continues to dominate the world of the full-size video game industry while incorporating online gaming.  While handheld consoles are not as popular due to the proliferation of smartphones, the Game Boy influenced app-based games and ingrained the idea that we can take the game with us.

It is incredible how technology started a long time ago and was used to create handheld video games. It was interesting to read how people went from the Nintendo Game Boy the size of a paperback book with just a single game to a Game Boy Advanced SP with more colorful graphics, complex machines with voice control, touch screen, and games with more moving parts. I like how the author started the article by describing the first video game and how it evolved over time.

As someone who still own a Gameboy and several cartilages (games) It’s interesting how it went evolving as the technology industry went creating modern technology and features. I love how it started off as something small and has now become an impacting moment in the creation of gaming consoles. I love how the article went into the details of the gameboy and pointed out the differences of the different versions of it.

This was quite an interesting and informative read. I honestly did not know there were so many version of the Game Boy that were produced. I mainly remember the Game Boy Advanced SP because I know while I was growing up, my cousins both had those versions and they would take it everywhere as they had become quite obsessed with them at the time. It is neat seeing how it was transformed over time with slight modifications to make entertain people for longer periods of time with little reasons to not use it, such as the lighting concerns. It is crazy how technology has developed over time, but it definitely a growing industry with an unknown future. Great job!

As someone who grew up with and still owns a Gameboy advanced sp, I never knew that the machine was released in the same year I was born. I thought that it was created in the late 1990s along with its predecessors, however, I found this article as a very clear wake-up call, that the toy itself was not all that old, and was in fact as old as myself. I found the entirety of this article to be incredibly informative, as I knew of the other consoles that came before the Gameboy advanced sp, but did not know the order in which they were released. I love everything regarding retro technology, whether it be game consoles, cameras, or computers, and as such, this article was well researched, assembled, and overall a great read for anyone else who shows interest in those topics.

This is such a cool article! I have always loved Nintendo while growing up and still do, I knew the Gameboy has successful, but I didn’t know it just how successful it actually was. I actually got a used Gameboy Advance SP about six years ago and I still play it to this day. I liked that in the article, you not only covered just the Gameboy, but you also covered how it evolved as well.

I am a huge fan of video games, and this article made me happy. A fantastic overview of the history of Nintendo and their popular gameboy. This article brought back memories of my childhood, playing on my gameboy advanced, and it is crazy how far video games have come since then, I have and absolutely enjoy Nintendo’s latest device, the Nintendo switch.

Hello Elizabeth. The article is well written and provides reliable information about the history behind the creation of the Nintendo game boy. In my opinion, the development of the Nintendo was revolutionary. I am a fan of video games and the perspective that Gunpei Yokoi created changed this field forever. It is nice to know that people have been working on video games since a long time ago. I am sure that the development of Nintendo game boy was a good influence helping engineers to develop even more technological video games.

I thought this was a really fun article read. Learning more about the Game Boy and its impact on video games. By being the first handheld gaming system. I love how it didn’t stop by impacting how Nintendo makes handheld games but how it also influences smartphones. The Game Boy really planted that seed for handheld games on the go.

Great job on the article it was very informative and interesting. I’m not much of a gamer but my entire family is. The only Nintendo I owned was the Nintendo DS and I remember having so much fun during my childhood with it. Seeing the different styles of the Game Boys that have existed over the years was cool. My family owns a couple of the older Game Boys but one I’ve never seen before was the Game Boy Advanced SP even though it’s very similar to the Nintendo DS it’s just slightly smaller. And being able to read about all the different components that came to make a game boy was fascinating because all those components went into such a small object to create and set the path, as I see it, for all future gaming.