The Hunt for the Bismarck: Menace of the North Sea 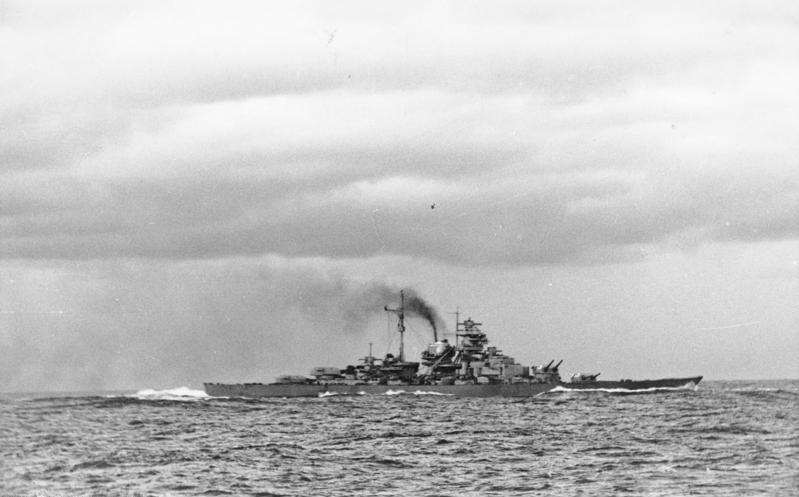 Long before the sun rose on May 19, 1941, the German battleship Bismarck left its port in German-occupied Poland, and headed towards the Danish straits, where the battlecruiser Prinz Eugen joined it, as well as a large Luftwaffe Air group on the alert for any possible Allied scouts. As it passed through the Danish archipelago under the cover of a cloudy night sky, a Swedish cruiser encountered it as it traveled past the neutral nation’s coast. An officer sympathetic to the British cause relayed the information to the British Navy, which went into high alert, because the German Kreigsmarine’s (the formal name for German Navy) most powerful warship was on the move. This ship was one of the few vessels that could have posed an existential threat to the British Isles. This moment launched the hunt for the Bismarck in the North Atlantic.1

By early 1940, the German Third Reich had near total domination over continental Europe once it completed its occupation of Norway and Denmark. With the Soviet Union’s non-aggression pact with Germany still in place, the United Kingdom was left to battle on the oceans alone against the Nazi regime. The crucial shipping routes from the United States and British Empire, on which the United Kingdom relied, kept the island nation on life support. The British feared what could happen if the Bismarck escaped the Baltic Sea, and terrorized convoys coming from the British Empire and America, which allowed the U.K. needed to stay in the fight. If allowed to run rampant, the battleship could escape into the North Atlantic and leave the British people starved and imprisoned in their own islands.2

The British Naval command instructed the HMS Hood, as well the HMS Prince of Wales to set sail from Scotland and stand by off the coast of Iceland, where the German Navy would likely attempt an escape into the Atlantic. In the early hours of May 23, a small British battle cruiser encountered the Bismarck north of Iceland, and they braced for incoming shells from the Bismarck’s superior 15-inch guns. However, those shells never came. The captain of the ship took this opportunity to shadow the Bismarck, and followed just outside the ship’s field of view, tracking it with radar.3

The British used radar to shadow the Bismarck from afar without notice, and this enabled the ships to broadcast the location, allowing the HMS Hood and Prince of Wales to move into position. The British used the echoes of radio waves off objects to determine a target’s velocity, distance, and size. Being a relatively new invention at the time, the British initially used powerful radar to serve as an early warning for raids. They equipped their warships with it shortly after the war began. The Germans, however, failed to invest into the emerging technology, which led to their ships and aircraft being easily tracked and monitored. This gave the British an edge over the German Luftwaffe and Kreigsmarine.4

The HMS Hood was the pride of the British Navy, one of the most powerful of the Navy’s ships. It used some of the most powerful guns ever installed on a British ship. The Prince of Wales was also advanced in its own right, because it possessed modern radar and distance finders, a relatively new invention at the time. The Bismarck, on the other hand, was a behemoth, which broke the strict international treaties imposed on it after World War I.5 The Bismarck was the largest ship ever possessed by a European power to date. With the large and untested Hood and technologically advanced Wales prepared to take on the unleashed Bismarck and Prinz Eugen, the battle in the Atlantic would prove to be one of the most defining naval moments of the twentieth century. Although the British Royal Navy still outnumbered any of its European counterparts, its naval arsenal was limited under the League of Nations naval provisions, and it was stretched thin as it attempted to protect all of the Empire’s overseas territories.6

In the early morning of May 24th, 1941,  a lookout on the HMS Hood spotted the German battleships Bismarck and Prinz Eugen. The Hood targeted what it believed to be the Bismarck and opened fire. Both British ships missed their targets, as the water splashed from the shells alerted the Bismarck to their presence.7

Less than five minutes later, a shell fired from Prinz Eugen broke through several layers of thick armor on the Hood, and exploded over 300 tons of ammunition within the ship. The large fireball lit up the night as the Hood violently exploded, splitting the vessel in two. In less than three minutes, the pride of the Royal Navy disappeared beneath the waves. Nearly all of the the HMS Hood‘s 1,428 crew complement died.8 The Prince of Wales narrowly escaped the same fate. Shells from the German ships struck the command bridge of the Prince of Wales, and fire rained down on the ship before it narrowly escaped. It used the smoke coming from it to conceal its retreat. Although it was heavily damaged, it continued to monitor the Bismarck using radar from afar.9

When the news of the HMS Hood‘s destruction reached London, shock filled the command room as the Prime Minister and his cabinet realized the Bismarck had destroyed the Royal Navy’s most powerful ship, and it had nearly sunk its other strong ship. A broadcast from Prime Minister Winston Churchill echoed across all British ships — It’s an order to sink the Bismarck at all costs.10

“I do not know what were the results of the bombardment. It appears, however that the Bismarck was not sunk by gunfire, and she will now be dispatched by torpedo. It is thought that this is now proceeding, and it is also thought that there cannot be any lengthy delay in disposing of this vessel. Great as is our loss in the Hood, the Bismarck must be regarded as the most powerful, as she is the newest, battleship in the world” – Winston Churchill11

Only a few ships in the North Atlantic might stand a chance against the Bismarck — the battleships King George and the HMS Rodney, the heavy cruisers Dorsetshire and Norfolk and the aircraft carrier HMS Ark Royal. The Ark Royal was one of the British’s armored aircraft carriers. At the time, many believed that battleships were far superior to mere aircraft carriers, as they did not possess as much firepower as the large double or tripled-barreled cannons on board a ship like the Bismarck did. The major trade-off the carriers had was their air wings, which consisted of one or two dozen fighter planes. These planes could travel faster than the ships which carried them and could surprise enemies from above with aerial attacks. The force pursuing Bismarck from the British Isles could not reach their target before it entered Luftwaffe Airspace, where it would otherwise impossible to win a battle. As a result, they chose to send the five warships based in Gibraltar and the Atlantic to intercept.12

With the Bismarck charting it’s course towards a port in Nazi-occupied France, the Navy had a short period of time they could strike before the Bismarck crossed into range of German Luftwaffe air support, which would’ve made any British efforts to sink it virtually useless. With this in mind, the carrier Ark Royal set sail from her port in Gibraltar. Squads of Swordfish planes took off from the deck of the Royal. Soon after, they spotted an oil trail leaking from the side of the mighty vessel. It appeared the Prince of Wales had left a fatal blow on The Bismarck.

The planes begun to drop their torpedoes. Surprisingly the Royal Navy lost none of their planes, which were largely obsolete and slow, despite having superior anti-air guns, a torpedo had struck the ship’s rotor, leaving it unable to move. Shortly after, the British battleships King George V and Rodney fired upon it. They closed in on it rapidly, however due to the Bismarck’s incredibly thick armor on its hull, it could not sink.13 They had started shelling the superstructure, only stopping after the guns of the ship fell silent. It is unclear whether it sunk from British guns, or if the German Luftwaffe scuttled the vessel. Regardless, the behemoth disappeared beneath the waves off the shores of western France, never to sail again.

Following the sinking of Bismarck, the Germans realized they failed to subdue the British, and turned their attention to their main target — the Soviet Union. Their failure had left Great Britain as a perfect staging ground for the invasion of Normandy in June of 1944 once the United States entered the conflict on the side of the Allies. The use of the carrier Ark Royal also helped solidify the new standard of using aircraft carriers as the main source of naval power, rather than large heavily-armored battleships, which had been the dominant form of combat since the 18th century. After World War II, the United States, a rising naval power, invested heavily in producing bigger and better Aircraft carriers. They would be used as air bases, because they could park nearly anywhere in the world. To this day, the lessons from the Second World War influence naval policy today, as the United Kingdom finishes sea trials for their brand new set of carriers, named the Queen Elizabeth class. They are the first carriers that Britain has launched in nearly a decade, as the country had no carriers in operation between 2011 and 2019. The armament of the new Queen Elizabeth Class has some of the most advanced technology in the world, allowing the British to remain a global power for decades to come.