The Mysterious Hanging Gardens of Babylon 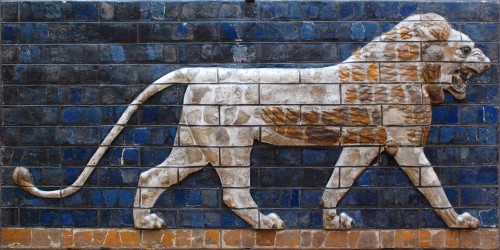 In 225 B.C.E., the Greek writer Philo of Byzantium wrote On The Seven Wonders, and this early literary work highlighted the greatest man-made entities at the time. Most of the seven ancient wonders of the world are still shrouded in mystery and beauty. Yet, when it comes to these ancient wonders, the most mysterious is the hanging gardens of Babylon.

The Seven Wonders of the Ancient World are the Great Pyramid of Giza, the Statue of Zeus at Olympia, the Temple of Artemis at Ephesus, the Mausoleum at Halicarnassus, the Colossus of Rhodes, and the lighthouse at Alexandria. The Hanging Gardens, the last Ancient Wonder of the world, called Babylon its home. Babylon rose to power for the second time from 600 to 550 B.C.E., as the Chaldean Empire under the reign of King Nebuchadnezzar. His kingdom grew to be thousands of miles wide, and King Nebuchadnezzar secured his capital city of Bablyon with large walls. These protective walls were believed to be multiple feet thick and impenetrable.1

On these walls were beautiful shrubs and flowers. The legend of how these flowers bloomed over the wall began with the king. Nebuchadnezzar was proud of his creation, but one of his wives still longed for more. She mourned for her homeland on top of a mountain and wished to see the beauty of her home once again. When the king heard this, he ordered for the flowers and shrubs to be brought and then placed on top of his great wall. Exotic flowers and greenery brought a wonderful fragrance to the kingdom. The walls were irrigated using new technology. Waterwheels and pumps were installed, truly making the gardens a scientific and artistic masterpiece.2

What we can know about the Hanging Gardens of Babylon is one the most challenging of projects for modern scholars. This is due to the lack of evidence that we have about whether these gardens ever even existed in Babylon so many thousands of years ago. Much of the literature on the Hanging Gardens was written by second-hand accounts in the ancient world. Historians and archaeologists have searched for the gardens in the ruins of Babylon, but nothing concrete has been found. There are many theories about the actual location of the gardens; the leading theory comes from scholar Stephanie Dalley, a researcher from Oxford University in England. She believes that the Hanging Gardens were not in Babylon at all, but rather in Nineveh.

Dalley is an expert in ancient Mesopotamian languages. The new translations of texts from the reign of King Sennacherib of Nineveh state that there was a large beautiful garden in Nineveh that was irrigated by an aqueduct. The texts describe a water-raising screw made of bronze. The descriptions resemble that of other ancient writers’ descriptions of the Hanging Gardens, and as such, there could have been a misunderstanding in translation in subsequent years. Dalley explains that the conquering of Babylon by the Assyrians gave them the nickname of Nineveh or “New Babylon.”3

The Seven Ancient Wonders of the World still have many mysteries connected to them. Yet, the most mysterious is that of Babylon’s Hanging Gardens. Many have been skeptical that they may have never existed. Now, new evidence brings hope that more about the Gardens may yet be known, and a new understanding of the wonder of ancient civilizations may come to light.4