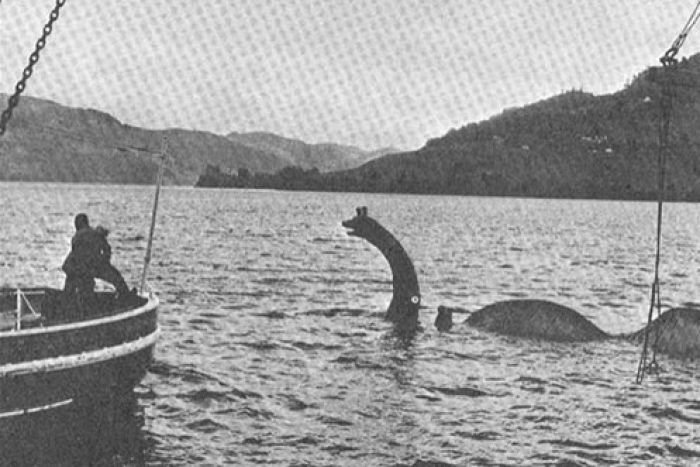 Loch Ness is a large, deep, freshwater lake in the Scottish Highlands, approximately 23 kilometres southwest of Inverness. Its surface is 52 feet above sea level and has a surface area of 35 square miles, making it the second largest loch in Scotland, closely behind Loch Lomond. Although Loch Ness is not the largest Loch in Scotland, it is by far the most popular, especially for tourists. This is because, for at least 1500 years, there has been a legend that some sort of water creature has been living in the loch. This legend first began when the Romans invaded the north of Scotland and came across tribes that they named ‘The Painted People.’ ‘The Painted People’ took a lot of pride in their art and had carved lots of pictures of animals onto rocks. These animals were easily recognizable, except for one: a strange beast with an elongated beak and flippers instead of feet. This is where the monster of the Loch Ness fable was born. In today’s Scottish society, the Loch Ness monster means a great deal to the local people.1

Not only does it increasingly interest them and add a rather mysterious atmosphere to their daily lives, but it is also a massive source of income for the Scottish people and their government. The amount of tourists coming to Scotland recently just to visit the famous Loch Ness has shot up dramatically. With decreased flight fairs and the pound currently being rather weak, Scotland’s foreign neighbours have been arriving in their masses.2

One man, Gary Campbell, has made it his life’s mission to uncover the truth about Nessie, and he devotes his life to the research and development of the Loch that he so much adores. Gary runs the official Loch Ness Monster Sightings Register, and is one of the most knowledgeable scholars on the subject. He was recently quoted by NPR as saying that in the last eight months of 2017 there have not been any sightings. This is extremely unusual, as he believes Nessie is normally very active, and not at all camera shy. This could mean a lot of things, but one of the most harrowing is that potentially Nessie has passed away, and that her extremely long life has finally come to an end. However, it could also mean that there is maybe more than one Loch Ness Monster, and now that there are only a few left, they would rather stay in hiding. These questions are the kind that Gary aims to uncover.

In the past one thousand years there have been many sightings, and even sightings that include pictures, to keep this legend going. One of the most famous of these sightings came from an English couple on August 14, 1999. It was around 11:30 a.m. when the couple touring the area spotted, in Urquhart Bay, what they first thought to be a car tire on the surface of the loch. It appeared to be about three feet long and one foot tall at its highest point. The object then moved, causing waves in the area creating a wake as it did so. The couple saw some kind of water disturbance about three feet behind the black colored object, which appeared to rise slightly out of the water before submerging. The initial surfacing is thought to be the head of the beast while the disturbance behind is thought to be one of the three humps of the monster. This sighting was a great boon for all of those obsessed with Nessie, but this sighting never included photographic evidence. A sighting is only truly taken seriously when a photograph accompanies it.3

Nessie, who had been “off the radar” for a worryingly long time, was again “spotted” in May 2017—bringing eight months of uncertainty to an end. Gary, who had only recently admitted he had been concerned after the dry spell since August the previous year, was overjoyed with the very promising photograph that complemented the visual interpretation of the beast. Hayley Johnson from Manchester claimed she had seen a strange, dark shape at dusk in the loch’s Urquhart Bay, the suspected resting place of Nessie. She said, “I was really excited about Nessie as a child but to be honest, I thought Nessie had probably died in the 1930s. I didn’t think she was alive any more. I know now that she is very much alive. I’m just so excited – it’s unbelievable what’s happened.”4

The most famous photo to date is “The Surgeons Photo,” even though the photo was later found to be a fake. In 1933, there was a bridge built connecting roads with the Loch, and because of this, people really began to take an interest in Loch Ness and Nessie. The Daily Mail (a Scottish newspaper) took advantage of this newfound curiosity in Nessie and hired a famous hunter, Marmaduke Wetherell. He was instructed to investigate the sightings and to find the monster. He ended up finding nothing closely related to the monster itself; however, in December 1933, he did find what looked like its footprints—large footprints on the shore of the Loch leading into the water. Unfortunately, when investigators from the Natural History Museum inspected the tracks, they found them to be hand made from a dried out Hippo’s foot. Humiliated, Wetherell retreated from the public eye.

A few months later, the Loch Ness monster once again made the headlines when a valued British surgeon, Colonel Robert Wilson, came forward with a photograph that appeared to show Nessie rising out of the water of the Loch. This photo was by far the clearest of all before it. It seemed to show the monster in clear view. Everyone was sure the myth had now become a certainty. Wilson asserted that he took the picture on the morning of April 19, 1934, while driving along the side of Loch Ness. He claimed that he saw something moving in the water and stopped his car to take the famous snapshot. For decades this photo was considered to be the most convincing piece of evidence to prove the existence of a sea monster in the Loch. But Colonel Wilson continued to refuse to allow his name to be associated with the photo. Therefore, it came to be known simply as “The Surgeon’s Photo.” For years disbelievers were sure that the photo was somehow a fake. Nonetheless, no proper examinations of the image were conducted until 1984 when Stewart Campbell scrutinized the photo in a 1984 article for the British Journal of Photography. Campbell came to the conclusion that the object in the water could only have been a couple feet long and that it was probably an otter or marine bird. He suggested it was likely that Wilson knew this to be the case. As it turned out, Campbell was wrong. The object in the water was not any form of animal at all. It was a toy submarine with a serpent head figurine stuck to the top. This was revealed in 1994 when Christian Spurling confessed to his involvement in the creation of the famous Surgeon’s Photo while on his deathbed.5 The plot involved both Marmaduke Wetherell and Colonel Wilson. Spurling claimed that he had been approached by Wetherell, who wanted him to make a model that would convince everyone at the time that Nessie was real. Spurling did so, and this model was then photographed in Loch Ness. The picture was given to Wilson, whose job it was to serve as a credible source for the hoax. Apparently, Wetherell’s motive was revenge. Since he was still sour after his humiliation over the hippo-foot tracks, he felt as though he had to gain back some sort of credibility. This is how, possibly, the most famous photograph of Nessie came into existence. In 1994, after the photo was proved to be fake, there was a major upset as a lot of people were devastated with the news, as it disproved potentially the biggest piece of evidence upholding Nessie’s existence. In recent years, scholars have come up with several points to disprove the existence of Nessie the Loch Ness monster.6

First of all, there have been no reliable sightings of the monster. There have been many suspected sightings and pictures; however, nothing concrete. But these accounts have always been unreliable and often differ substantially on what the monster even looks like. So far, hoaxes aside, no one has produced a single authentic photograph. That should make us extremely suspicious. But that objection is just the beginning.

Secondly, if Nessie did exist, Loch Ness wouldn’t be big enough for her to inhabit. If there were a Loch Ness Monster, there would need to be an entire population of them, so they could reproduce and live for the length of time that Nessie has been suspected to live there. But no one has ever produced any concrete evidence that there’s a herd of these monsters. There aren’t even wild rumors or hoaxes of it. Even more significantly, Loch Ness is simply too small to sustain a creature of Nessie’s suspected size. Researchers with the Loch Ness and Morar Project say that there are only about twenty-two tons of fish in the lake. For a giant-breeding creature, this would be nowhere near enough. Loch Ness just isn’t big enough or fertile enough for a monster of Nessie’s size. There’s also another problem related to the Loch itself. Loch Ness is in the northern part of Scotland, making it an extremely cold place. And since Nessie is usually described as a reptile, Loch Ness simply isn’t an appropriate habitat for such a creature. There are a few species of reptiles that live in Scotland, but a cold-blooded animal couldn’t live in Loch Ness unless it has adapted to it. Believers of Nessie might reply by saying that the beast is warm-blooded like the dolphins and seals spotted in the loch. But a gigantic warm-blooded, lizard-like creature is even more unlikely. It is also even more unlikely considering that the lake hasn’t been around long enough for such a unique animal to evolve on its own. Evolution would take a lot longer than just a few hundred years.7

With all of this information, there are definitely arguments for both supporting and disbelieving the existence of Nessie the Loch Ness Monster. However, there will never be a definite answer, as sceptics will continue to ponder the thought of such a beast, and there will probably always be unreliable sightings. The myth related to North Scotland may never be solved and will stay on the minds of scientists and dreamers for many years to come.