To The One I Loathe: Chicago’s 1929 St.Valentine’s Day Massacre, Part II 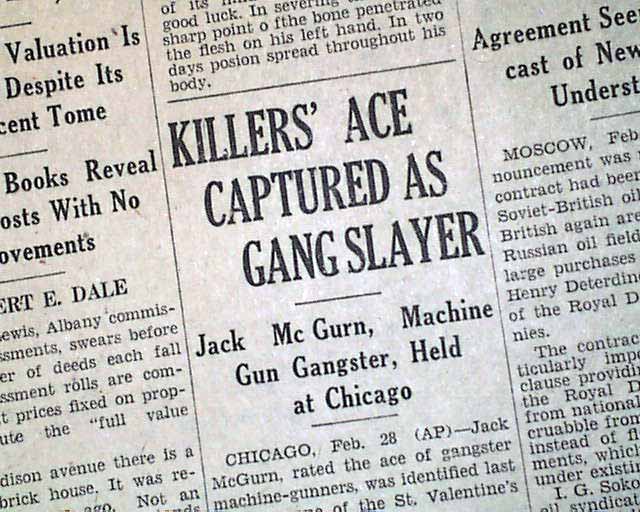 Jack McGurn would soon learn that of the seven men killed the morning of Feburary 14, 1929, George “Bugs” Moran was not one of them. Moran and a couple of associates were on their way to the garage when they saw the police car pull in. Believing that a Prohibition raid was about to take place, Moran and his associates did not enter the garage but instead continued their walk down the street.1 Although Moran survived this attempt on his life, it would cause him to go into a sort of early retirement from his life of crime.

As reports from witnesses and tips began to come in, police began to narrow their search of suspects, naming Al Capone as the man who orchestrated what would forever be named the St.Valentine’s Day Massacre. Police looked into Capone, but were unable to find any ties to the crime. Capone was with his family in Florida at the time of the crime, and after checking phone records, police saw that no calls were made to or from Capone several days before or after the massacre.2 Capone was ultimately ruled out as a prime suspect. It may seem that because these were his men who committed this gruesome crime, it would be easy to say it must have been Capone who ordered the hits, but looking closer at the story, it seems that while he may have been involved, it was Jack McGurn who was calling all the shots.

The days and weeks following the massacre churned out rumor after rumor that police had been involved in the incident.3 If McGurn wanted to create confusion in the minds of law enforcement and keep his name out of the spotlight, having his men pose as officers as they gunned down the Moran gang did the job. Law enforcement made attempts to shut down the accusations as quickly as they could, and tried everything in their power to catch the men responsible for the hideous crime. Rewards for the capture and conviction of the criminals were offered $50,000 from the Chicago Association of Commerce, $20,000 from the City Council, $20,000 from the state’s attorney, and $10,000 from public collections.4 It was clear that not only the police, but the entire city of Chicago wanted these men to pay for their crimes.

One of the seven men shot that morning, Frank Gusenberg, had somehow survived the initial attack from McGurn and his men. An officer visited him when he was taken to the hospital, but Gusenberg remained tight lipped and refused to give any names as to who orchestrated the attack. When asked by the officer who had shot him, he simply replied, “No one, nobody shot me.”5 If the police wanted to nail down any leads, they had their work cut out for them. Clues slowly began to come in, and on March 4th, three men were named in the massacre: Joseph Lolodro, James Ray, and Fred Burke.6 Lolodro disappeared off the grid, it is unknown what happened to Ray, and Burke was tried and sentenced to life in prison for an unrelated crime.7

Later, Jack McGurn and John Scalise were taken into custody, but both made bail and were back on the streets of Chicago. Scalise was soon the victim of another gangland assassination, leaving McGurn to fight alone against the charges.8 Forensic science in 1929 was nothing like it is in our current age, so McGurn’s case continued to be pushed back further because of the ongoing investigation. Finally, ten months later, on December 2, 1929, it was decided that there was not enough evidence to convict McGurn or anyone else involved in the case, and the case was ultimately dismissed.9 “Machine Gun” Jack McGurn and his men had gotten away with murder. No one was ever convicted in the St.Valentine’s Day Massacre. Chicago became home to the “most vicious slaughter” in the nation up until then.10 No matter how the case ended, and who was really at fault, the gang wars in the Chicago area had reached an all-time high, and something needed to be done, the violence needed to be stopped. The city of Chicago would forever be changed and tied to gangland violence because of this event. The city would continue to see gang warfare for decades to come, but hopes were that this was the last time such a gruesome attack would occur.

Return to Part I

It was a shock to hear that the main guy to be killed was not one of the men to be shot, and it was his luck to be arriving after the seven men did. It is confusing to me as to why the man in the hospital didn’t want to say anything to police officers, and I wonder if it’s because there some type of code that all gangs follow, no matter the rivalry between some of them, that if they are question about the other gang by the police, they won’t give any information.

The Valentines Day Massacre is one of those events from Gangland America that will live in infamy in history. Every year, documentaries are still produced about the killings, but rarely a two part series in the form of an interesting academic paper. These two articles do a great job dissecting the hysteria and motive behind one of the most brutal gang fights of the time.

This article was well written and gave a good account of what is known about the St. Valentines Day Massacre. As the article points out it is usually linked to Al Capone but even if he did order it, there was little evidence. Instead, it focuses on McGurn, a man who I had never heard of before reading this article. It is an interesting reminder that even though the huge gangs were lead by a prominent gangster there were still many powerful subordinates under them.

I honestly don’t understand the criminal mentality of not being a rat. Frank Gusenberg was lying in the hospital after an attempt was made on his life and still refused to tell the police who shot him. I am not surprised that nobody was ever convicted for the massacre, especially not when Frank was a key witness yet not willing to cooperate.

Its crazy that even after being shot and hospitalized Frank Gusenberg decided to not tell the police who was the one that shot him. the St. Valentine’s day massacre doesn’t have a lot of evidence surrounding it and even with the evidence that is out there it is unclear if Al Capone was the one that ordered for this to happen.

Articles like this really interest me because of their backstory. Its weird to think that the case was dismissed after everything that had happened and there was insufficient evidence to get to a conclusion. Most of all I really liked the Mugshot with the title Machine Gun Killer, it really caught my attention which is why I first clicked on the article.

Very well written article.This article was so interesting to read. I thought it was fascinating to read how after Frank Gusenberg was shot and was in the hospital bed he refused to tell the police who shot him, thats just wow. I can’t understand what he was thinking. This article was fascinating and truly one of the best ones I’ve read. Great Job!

The first part was so interesting I had to read the second part. What got me was that even though he was in the hospital bed, he did not confess who shot him. The criminals were not found nor convicted due to the lack of forensic equipment they had back then to get evidence. If they were to have what we have today, they would have found them easily.

I guess it’s also true they also eventually find the killer. It may take a long time or maybe just a week, but they always find them. Though I do find it weird that one just disappeared but at the time it was pretty easy to just fall off the grid. However, I also find it weird that no-one in general even knows what happened to the second guy. A l Capone still probably had a hand in the murder. However, a very well-made article and I hope to read more by you.

Another very well written article! It was straight to the point but perfectly concise where it gave the perfect amount of detail to keep the reader hooked and interested! I hadn’t known of this ploy by Jack Mcgurn known as the Valentines Day Massacre, It was a very interested read that goes to show that no matter how well you cover your track justice will usually always prevail!