“Jinx! Buy me a Coke”: John Pemberton and the Origins of Coca-Cola 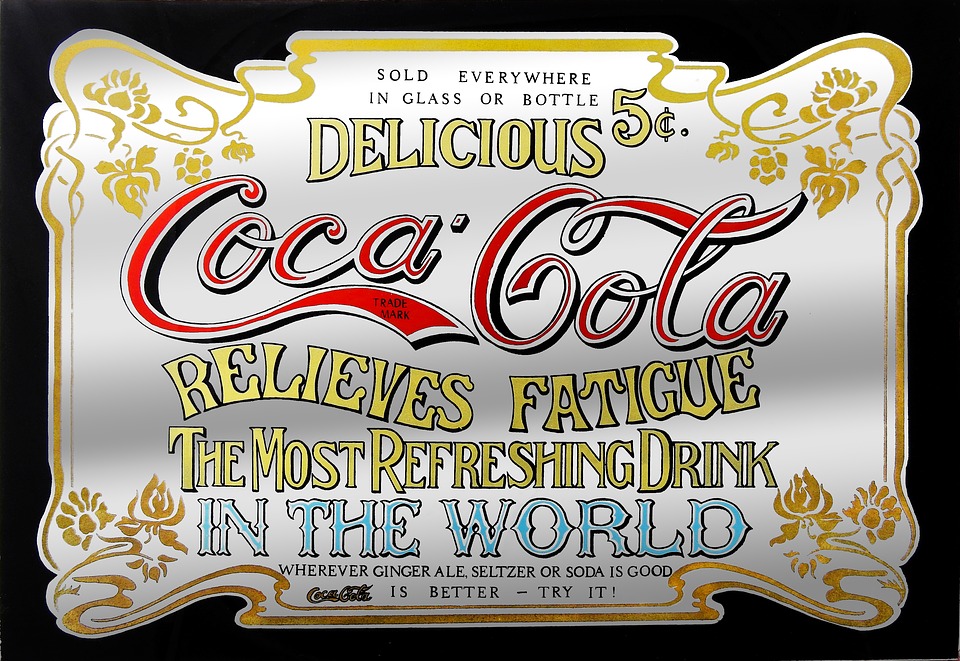 “The street cleared momentarily. Folding his paper under his arm, the elderly man crossed the street before another buggy bounced through the intersection. As he put his key into the lock at 107 Marietta Street, a young man briskly lifted his hat on his way by. ‘Good day, Dr. Pemberton. Hot enough for you, sir?’ The old gentleman nodded and smiled. Everyone in Atlanta knew and respected the kindly old patent medicine man, and most took one of his remedies for their cough, dyspepsia, headache, sexual debility, or whatever else ailed them.

As Pemberton entered his laboratory, he looked with satisfaction at his fresh supply of coca leaves, straight from Peru, and at the filtering system he had set up to produce coca extract. He was experimenting with a new concoction, one that he hoped would sell as a temperance drink and medicine, because the town was in hysteria over the evils of alcohol.”1

In a world of elixirs, potions, and artificially flavored concoctions, there is one beverage that has successfully managed to steal the hearts of billions and carve its rightful home into the lives of many the world over. This drink could cure any ailment and fix any problem, all while providing that extra good feeling after a long and stressful day at the office or at home. Made for people of all ages, this magic beverage had slowly started to gain in popularity, and before you knew it, this drink had become a household staple. Can you guess the name of this iconic beverage? If you guessed Coca-Cola, then you’ve guessed right. However, the drink that is recognized and loved today is not the same that it was when it had originally started. The history of Coca-Cola is a long one, full of secrets, lies, and ingredients that may shock even the most loyal of supporters.

Created in 1886 by an old Southern root doctor from Atlanta Georgia, John Pemberton, the famous Coca Cola drink has had a history of humble beginnings, being first created in a three-legged kettle in Pemberton’s backyard rather than in the hi-tech industrial factories that we recognize today. Wilbur Kurtz, the first person to ever try Coca-Cola, described the experience of that moment by stating that, “He leaned over the pot to smell the bouquet of his brew. Then he took a long wooden spoon and captured a little of the thick brown bubbling contents of the pot, allowing it to cool a moment. He lifted the spoon to his lips and tasted.”2 Surprisingly enough, the invention of this beverage was something of an accident; although John Pemberton put a lot of hard work and perseverance into the creation of Coca-Cola, finding the right taste was a stroke of luck when the syrup was accidentally mixed with carbonated water rather than plain water.3 Imagine! That extra kick signaled by the tingling sensation that occurs as the liquid flows down our throats was nothing but a simple mistake. Yet, it is one that we could not imagine having resulted otherwise. According to the reactions of Pemberton’s customers, it was proven that the beloved carbonated drink provided him with an assured influx of clients, having smacked their lips in satisfaction every time a new “pop” was made when opening a brand new Coca-Cola bottle.3 At least, this was the story the company tried to sell to its millions of fans all across America.

The history of Coca-Cola is paved with fabricated stories set up by the company as an advertising mechanism so as to sell more and more bottles of the product every day. The truth of the matter is that Cola-Cola was nothing but one of the many products marketed as a “patent medicine” with a distinct cocaine kick.5 While it remains true that Pemberton was the original creator of the Coca-Cola beverage, the story of him creating the iconic drink in his backyard is a great stretch from the truth. What may come as an even greater surprise is the notion that the first samples of Coca-Cola, in its stages as a medicine, were actually made with cocaine. New research sheds light on this approach by claiming that the recent discovery of once-classified documents by the Federal Bureau of Narcotics reveals that Peru was the largest producer of both coca and cocaine; and Coca-Cola, and its partner the Maywood Chemical Clinic of New Jersey, has had extensive relations with Peru predating 1903.6 By the 1950’s, Coca-Cola had tried to deny any allegations of the brand’s association with the usage of the Andean coca-leaf in its beverage, which it claimed to have de-cocainized its formulas since 1903.6 Nevertheless, this statement alone proves that Coca-Cola, whether or not it continues to use coca leaves in its mixtures up to this day, is guilty of having used cocaine in its mixtures over a seventeen-year period, from 1886 to 1903. For this reason, Coca-Cola is thought have had a high stake in US-Peruvian drug diplomacy. The recent discovery of a cryptic telegram from Lima dated from 16 February 1933 and addressed to the then chief attorney and vice-president of Coca-Cola, Harold Hirsch, states,”ACCORDING TO YOUR LETTER COCAINE BURNED TODAY AMERICAN CONSULATE PERUVIAN OFFICIAL MYSELF WRITING.” This document was later revealed to have been a secret project in which Peruvian coca leaves were burned in order to create an experimental extract called Merchandise No. 5, a de-cocainized version necessary for creating the beverage.8 As interest began to grow in the company’s “secret formula,” Asa Candler, the then president of the ever-expanding Coca Cola company, had to find a way to deal with the public’s fear of cocaine and he effectively did so by eliminating all traces of the drug from the drink by the early 1900’s. Interestingly enough, it was stated that the company had to receive a special exemption from the United States’ anticocaine legislation for the importation of “de-cocainized coca leaves or preparations made therefrom.”9 Why would a company who claims to have rid itself of any traces of cocaine need a special permit to continue importing specially formulized leaves into the United States? Apparently, Coca-Cola had the responsibility of obtaining the right to import the “special leaves” for its partner company, the Maywood Chemical Works. The Maywood Chemical Works was a company primarily associated with the importation of special leaves from Peru that were later discovered to have been specifically reserved for coca leaf extract in beverages. During that time this company was the only legal purchaser of these special coca leaves from Peru, and it was no coincidence that the Coca-Cola company happened to be its partner company and primary customer. While the truth of Coca-Cola’s continued usage of cocaine via coca leaves still remains a topic of debate, the traces left behind serve as evidence that there were instances of relations between the company and the product.

Another revealing fact lending itself to the usage of cocaine in the beloved carbonated beverage is in the name of Coca-Cola itself. By the mid 1900’s, the name Coca-Cola was seen as being synonymous with the term “dope,” a word previously found to mean any “preparation of mixture or drug, especially one that is harmful.”10 In addition to this, a quotation from Printer’s Ink, a California-based magazine focused on American trade, revealed that by the year 1915, Americans were already getting used to calling Coca-Cola, their favorite drink, by the terms ‘dope’ or ‘coke’ or ‘koke.’ Clearly, Americans were, to a certain extent, aware of the potential contents of their beverages; even more so that they went so far as to create nicknames for it. To continue with this new period in coke history, a quote from an Erskine Caldwell novel in 1931 stated, “Everybody likes Coca-Cola. There is nothing better to drink on a hot day, if the dopes are cold.”11 By this time, not only were Americans familiar with the term dope, but the popularity of its relation with the Coca-Cola brand was so strong that it had managed to carve its way into various corners of society, such as literature. Additionally, the use of the word dope in American slang mostly circulated in the Southeastern region of the United States, more specifically the areas of Georgia, North and South Carolina, as well as Virginia, which were, to no surprise, the areas in which most drugstores and soda shops were commonly referred to as ‘dope shops’ by the general public.12 Since the reach of Coca-Cola was strongest in the South, it was natural for the term dope to catch on fairly quickly in those areas.

However, what remains to be true about the world-renowned brand is the fact that it was originally invented in the years following the American Civil War as well as the fact that it was first sold at drugstore fountains and promoted as a drink to cure various ailments. And, while the soft drinks that were first marketed as medicines did in fact contain questionable ingredients, they have changed quite extensively over the years, while maintaining their unique brand names through their respective transformations. Additionally, when Pemberton first created the Coca-Cola drink in 1886, he wished to create a beverage that would help alleviate not only his own medical ailments but also those of his customers.13

Although Coca-Cola has denied any claims of continuing the usage of coca leaves in their iconic beverage, the question as to whether or not there are still traces of cocaine in the beverage still remain a mystery. The history of the brand is, without a doubt, a very long one, filled with many secrets and suspicious actions. Their history of the use of cocaine in Coca-Cola helps to provide an insight as to the company’s continued usage of it in their product. However, one thing still remains true up to this day; a freshly opened bottle of Coca-Cola still possesses the power to put a smile on the face of anyone who is daring enough to take a sip of this dangerously delicious drink.