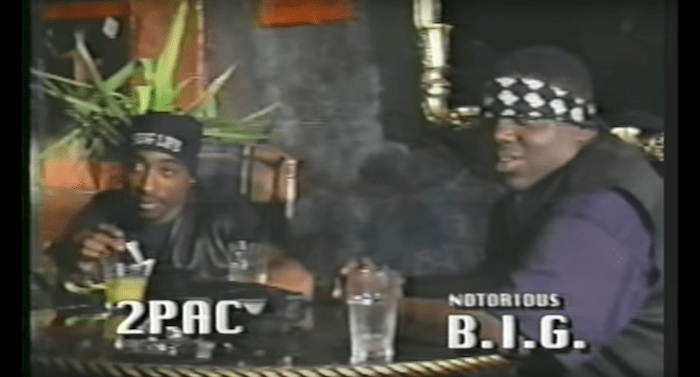 “Biggie, remember when I use to let ya sleep on my couch, And beg the b**** to let ya sleep in the house. Now it’s all about Versace, you copied my style. Five shots couldn’t drop me, I took it, and smiled, Now I’m ’bout to set the record straight, with my AK. I’m still the thug that you love to hate” —Tupac Shakur

These were some of the strongly worded lyrics written by Tupac Shakur in the song “Hit ‘Em Up” after the believed betrayal of his once close friend, Christopher Wallace, also known as Notorious B.I.G or Biggie, and his record company, Bad Boy Records.1 The battle between these two infamous rappers was well known in the 1990’s as the Battle of the Coasts, West Coast vs. East Coast. So how did these two legendary rappers become such close friends, and how did it go sour between them?

The two rappers first met on the set of the film “Poetic Justice” in 1993, in which Tupac was featured. Biggie was visiting the set while Tupac was playing Biggie’s newly released single “Party & BullS***” on repeat. Biggie was flattered that such an advanced rapper was enjoying his music. Shakur eventually introduced himself to Biggie as a fan of his music. That’s when it clicked for the two. As their friendship began to grow, the two would hang out frequently at Tupac’s home in Los Angeles, where they smoked, drank, and wrote rhymes. This helped bring the two together and bond through their love of Hip-Hop. Little did they know that their friendship would later become one of the biggest feuds in Hip-Hop history.2

The two artist began to bond, and while Biggie Smalls was just making his breakthrough in the Hip-Hop industry, Tupac decided to take him under his wing and become his mentor because he was the more experienced artist, according to D-Dot in an interview. D-Dot was a close friend of both Tupac and Biggie.3 Shakur offered Smalls valuable advice, and even helped create the sound that made Smalls as big as he was. As their relationship grew and Shakur continued to mentor him, Biggie assumed that, since the two had been spending a lot of time together and had become close, he could ask Tupac to become his manager, according to Ben Westhoff.4 Tupac kindly declined, saying that Biggie’s manager “Puff Daddy” would take Biggie where he wanted to be in the charts, telling him that he was going to make it big in the industry.

Their friendship lasted one year, and the two made back and forth trips between Los Angeles and New York. Over time Tupac began to like the respect he received from the East Coast and became involved with some very dangerous shot callers, high-ranked gang affiliates, of the East Coast. Biggie warned Tupac about getting involved with particular individuals, because he knew just how dangerous some could be, and they weren’t afraid to take a life; but Shakur assumed he was on good terms with everyone.5

Tupac was being convicted of sexual assault charges and was looking at serving up to twenty-five years behind bars. On November 30, 1994, he made a stop in Harlem, New York, and was supposed to go to Quads Recording Studio to record with “Little Shawn,” an east coast rapper, since it would possibly be his last recording session for a long time. After a situation involving payment, the recording session was delayed, and Tupac finally arrived at midnight. Once he walked into the lobby, he was ambushed by three men in army fatigues, held at gunpoint, robbed, and then shot multiple times. According to Tupac, when he saw the faces of Biggie and Puff Daddy shortly after the incident, their faces looked guilty. This led Tupac to believe that Biggie knew about the set up and didn’t warn him in advance. That was the end of their friendship.6

On December 1, 1994, less than one day after the shooting, Shakur showed up to court bandaged up and in a wheelchair. He was found guilty of sexual assault and then sentenced to prison for a year and a half to four and a half years on February 8, 1995.7 During his time behind bars, Biggie released a track titled “Who Shot Ya,” which led Tupac to believe that it was a diss-track aimed at him because of the robbery, but Biggie discredited that claim. Shakur appealed his convictions and a New York judge released him on $1.4 million bail with the help of Surge Knight after he signed to Death Row Records.8 Tupac became as ruthless as ever, once he was released. He went to the extent of making the claim that he slept with Biggie’s wife, Faith Evans, and that Biggie was stealing his style because he was the superior in the industry, which he emphasized in his diss track “Hit ‘Em Up.”

On the night of September 7, 1996, the feud between the two came to a climax when Shakur was fatally shot in Las Vegas. He was placed in the intensive care unit. Days later, Tupac was pronounced dead from internal bleeding caused by multiple gun wounds.9 But the murder of Tupac was not the end of their situation. On March 9, 1997, Notorious B.I.G was murdered in a drive-by shooting in Los Angeles. Many believe his death was a result of the toxic relationship between himself and Tupac.10 Although both legends were killed and the issues between the two were never resolved, the two brought the West Coast vs. East Coast rivalry to life.11 It continues, and so does their legacy that was left behind.

Tupac and Biggie were both such talented and unique people. They both died way too young and never reached their full potential and full success. Their friendship was both beautiful and was more likely to be hated on and be a target. I believe both of their records and own personal friends planned their falling apart months before it actually happened.

This was a great article. I do not know much about Tupac or Biggie but I am trying to learn more and this article was great help in understanding some of the famous history. Friendship rivalries hurt the most because as friends there is a lot of love and respect for one and another and to see it in death is even more painful. This was a heartbreaking but great article.

I find the feud that Biggie and Tupac had interesting. Tupac and Biggie had a fair ground at the beginning of their relationship. The fact that Tupac decided to take Biggie under his wing and help him out during the beginning of his career shows how compassionate he was. I feel bad that the friendship they had had to end so badly do to affiliations they had. It goes to show how dangerous and serious affiliations can play on someone’s life.

I have heard of both of these rappers, as well as the general history of the influence of both of these rap icons, such as being from different costal ‘rhythm and flow’. I knew there was a feud between these late rappers deaths being closely tied to the shootings as well as the occurrence. The info gathered for the backstory of the feud between these two rappers showed a play by play of events as well as tensions that might have arisen during that time period as who was the better coast

I have always found this topic so interesting. Tupac and Biggie are some of the most well known and influential rappers. This story is definitely a famous one, and It’s sad how their friendship ended so tragically. This article did a great job describing the rivalry that took place and how hip-hop created and destroyed their relationship. I enjoyed learning more about the feud that took place.

This article does a good job in putting into perspective what the power of the media can do, an exampe was shown in the article how Smalls claimed the song was not aimed at Tupac but obviously that didnt go as planned. Its sad that both of these artists died in such a tragic way since they had a huge impact on Hip-Hop and what it is today. I believe they are a big influence on what the East vs West coast rivalry is like today with multiple artists being inspired by them. Overall, I really enjoyed this article and reading about two of the biggest artists in hip-hop and the story about Tupacs and Biggies friendship.

I’ve been aware of the feud between the two rappers since I can remember but I’ve never cared much to research it and I thought I wouldn’t understand anyway, but this article broke it down so well! I didn’t know Tupac had a sexual assault conviction and I’m disturbed that I didn’t know. Why does no one say that about him when speaking about what a great person he was? For a friendship that really only lasted one year, it really left its mark in music history.

I was aware that Biggie and Tupac were feuding but never knew why. This was completely shocking to read after discovering that Biggie basically chose to not warn his friend due to them being on bad terms. I like how informative this article was because I learned about a great friendship that turned into a toxic one, leaving both dead.

I remember seeing this part happen in Tupac’s movie All Eyez on Me. I love Tupac and Biggie’s music to this day and it makes you wonder what would have happened if they both were still alive. I thought this article was interesting because it happened only because Tupac assumed that Biggie knew about what was going down that night. This situation could have easily been avoided if Tupac communicated, but that is not what happened. The end result was two men died over a war of what ifs.

It was interesting to read this article about two of the biggest influencers in Rap. We don’t really know about what goes on behind the scenes unless you’re with them or involved around what was going on, but I was informed in this article. These two had music that one could feel in the soul and what they would talk about which was real life stuff could also be felt with every word they said. I am glad I read this article because recently a interview happened that showed the feud that was going on could had been avoiding and he actually said that Tupac had no business in it which is strange because he was or became very involved.