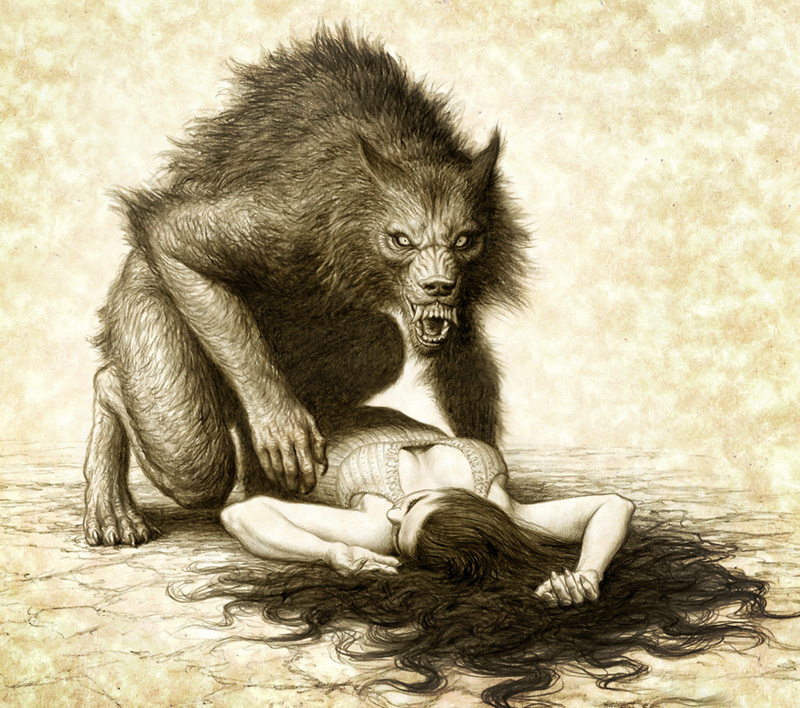 Have you ever heard that at night the creatures come out, especially when there is a full moon. But whenever people think of a full moon, the thought of a werewolf might cross their mind. Because of the famous movie Twilight: New Moon, which was released in 2009, people might imagine a werewolf being Taylor Lautner turning into a huge wolf. However, before this movie was released to the big screen, werewolves were thought to be a thing of the night, actual monsters to fear.

In the past, werewolves are said to be the product of a human’s involuntary, typically only temporary, transformation into a wolf.1 They didn’t necessarily completely change into a full wolf, but had the appearance of being half-wolf and half-human. For quite some time during the medieval period, many couldn’t accept the fact that a man could transform into a wolf. They concluded that these werewolves were a product of magic, that witches used their magic to transform someone into a wolf, known as lycanthropy. With the use of magic, these werewolves were considered voluntary werewolves, as oppose to involuntary werewolves, who shifted into wolves because of their sins.2 After the transformation was made, people assumed a werewolf was a servant from the devil himself, and anyone accused of being one was put to death.3

The origins of these beliefs started in the Balkan area. In this region, the Dacians, who were an ancient people, had a wolf as their totem animal. With this being said, they believed that they were able to turn young men into wolves when performing a ritual.4 When this ritual was performed, they would imitate a wolf along with wearing wolf skins; this is because they believed the wolf should be highly respected for being a hunter. Even in Greek mythology, one can find stories about men transforming into a wolf. They told the story that the mighty Zeus became angry at a man named Lycaon, and for a punishment, he turned Lycaon into a wolf. With this story we get the term lycanthropy. However, some people believe that werewolves may be a relic of early cannibalism rather than just beings consulting with the devil. Communities of semicivilized people would begin to shun those who devoured human flesh, ostracizing them and classifying them as wild beasts.5 People who would willingly choose to eat a human being are not really human, but rather a beast, because they behave just as beastly as a wild animal.

The belief of werewolves may seem fictional to us today, but in the 1500’s, these beasts were thought to be completely real. In 1407, Basel Switzerland authorities claimed that they had the first official execution of werewolves, with several individuals being accused, then tortured and burned.6 Werewolf trials then took place in Poligny, France in 1521, when three men claimed they were consulting with demons in order to gain the power to transform into wolves. The men then confessed that they had killed and consumed several children for nineteen years. All three men were then burned at the stake.7

In the following years, many cases of people being werewolves were brought forward. One of the most famous cases was of Gilles Garnier in Dole, France 1573. No one understood why several young children disappeared in 1573, until Garnier and his wife were arrested and tried as werewolves. Garnier confessed that he had killed a twelve year old boy, and was going to consume his flesh, but was interrupted before doing so. Although he was in human form, some citizens claimed that he had appeared as a wolf. In his confession, he claimed to have killed a ten year old girl while being in the shape of a wolf, using his teeth and claws to devour her.8 He also claimed to have attacked a girl but was again interrupted; several days later he strangled a ten year old boy, ripping his leg off and eating his flesh. In both incidents he claimed that he was in wolf form. After all of his confessions, he was then burned alive on January 18, 1574.9

In another known case, a man named Peter Stubbe also claimed to be a werewolf. He possessed a magic belt that allowed him to transform from man to wolf. Although authorities never found his belt, he was beheaded for his crimes in 1589.10

Finding evidence of real werewolves was tricky, until 1598, with the case of Jacques Roulet. A group of hunters stumbled upon two wolves devouring a fifteen year old boy. Since they were armed, the hunters decided to follow the wolves. When following the tracks, the paws slowly started to become more human like. They finally reached the end of the tracks, finding a man with long hair and a long beard, wearing rags, his hands covered in blood, and his long nails contained bits of human flesh. Jacques claimed he had possessed a salve that would enable him to turn into a wolf.11 Although the cases of werewolfism died down, the idea of being a werewolf never disappeared.

Over time, the phenomenon of werewolves took a new shape. In 1935, the movie Werewolf of London opened, introducing a cinematic version of these supernatural beings. The plot of the movie was inspired by the true story of Francis Bertrand. Bertrand had been convicted in 1848 for breaking into several graveyards in Paris. He would dig up recently buried corpses and consume their flesh.12 The story was then transformed into a movie about Bertrand Caullet, a person who didn’t have the knowledge of being a werewolf until being shot with a silver bullet. The silver bullet was significant, as it became a reoccurring theme in later movies, including Frankenstein Meets the Werewolf in 1943, and later in An American Werewolf in Paris in 1997. With the use of the silver bullet, people stepped back from thinking of beheading or burning people at the stake as ways of killing these beasts. The concept of using a silver bullet emerged from the Scottish belief in the efficacy of using silver to kill witches.13 Another modern adaptation that emerged was in the ways one would become a werewolf. In the past, in order for you to transform you needed the help of a witch or magic, but that started to fade. Today popular culture has transformed the original belief into one that sees being bitten or scratched by a wolf or werewolf in order to become a werewolf. The reason for this change started with The Wolf Man film of 1941.

By the 1970’s, werewolves had become very popular in genres of horror: in movies, in books, and even in television shows. With the franchise of werewolves still growing, there are less cases of werewolfism today. Many doctors believe that what people witnessed wasn’t an actual werewolf, but rather a person suffering from a serious mental illness, along with a condition called porphyria. Porphyria causes people’s skin to turn brown and oddly textured. People who suffer from this disease also become sensitive to light, making them more comfortable with venturing out at night.[13. Encyclopedia of Occultism and Parapsychology, 5th ed., 2001, s.v. “Werewolf.”] However, even with the explanation of having porphyria, some still believe in the phenomenon of werewolfism. In one case, a forty-nine year old woman believed that she was a werewolf, even after receiving psychotherapy and antipsychotic drugs. She would be able to control herself until a full moon, but when the full moon arrived, she would behave like a wolf by snarling and howling.14

The perception of what a werewolf is has shifted over time, but judging by its origins, maybe it was for the best that we changed our thoughts of werewolves. Although we may never know if a man can truly turn into a wolf, we can’t stop people from believing in werewolves. The past has been proof that people believe in werewolves regardless whether it seems impossible. Just keep in mind the next time you decide to walk alone at night on a full moon, you never know what creature lurks in the dark of night.