The Drive to Survive: Eva and Miriam Mozes 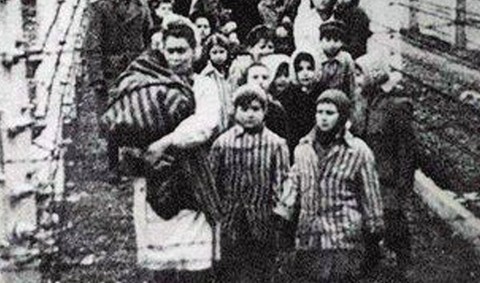 At ten years of age, most children are running outside playing with dolls and with the neighborhood kids, while their parents are supporting their imagination and naïve dreams. Such a normal world changed overnight for ten-year-old twins, Eva and Miriam Mozes, when the Hungarian Army took control of their small Romanian village in 1940. Being the only Jews in the small village of Portz, the Mozes family was treated horribly by many. Racial slurs and sadistic terms and phrases became an everyday experience for the girls while in school and around their village. Soon after the Nazi invasion of Romania, the Mozes family was forced into a ghetto and eventually shipped off like cattle to the infamous concentration camp of Auschwitz. After three days of unbearable traveling conditions, the girls and their family arrived to hell on earth. Over the haunting gates, they read “Arbeit macht frei,” which translates to “work sets you free.”1

As the cattle doors of the train swung open and chaos consumed the air, Eva and her family stepped onto the selection ramp, which became their final moments together. Within twenty minutes, Eva and Miriam lost all their siblings and both parents to the gas chambers of Auschwitz. Two ten-year-old girls all alone in the darkest place on earth. Moments before Eva and Miriam were stripped from their mother’s tight grasp, German soldiers began to shout as they looked for twins. In a moment of terror and panic, the girls’ mother asked if this was considered a good thing. The Nazi soldier replied “Yes,” and the two girls were led one way while their family another.2 Eva and Miriam did not know it then, but being together in the womb allowed them to be together through the worst of times.

Processing for Eva and Miriam went differently than most due to the fact that they were now considered “Mengele twins.” This title made them special, for as long as Dr. Mengele found them to be useful subjects, they were not to be harmed. The girls were allowed to keep the clothes on their back, the hair on their head, and their lives. Now that may seem like very little, but within an hour of arriving, some prisoners met their death in the gas chambers while others were forced to shave their head and change into the well-known striped uniforms for the work camp inmates. However, the process of tattooing remained the same. This was one of the many defining moments for Eva. This is when she began to take a stand and fight for her life and for a chance to survive. She questioned, at such a young age, what right they had to permanently mark her body. She began to resist and fight against the soldiers and nurses, making it very hard for them to complete their task. She even went so far as to bite one of the soldiers, which she explained, felt so wrong, as she had been taught throughout her young life that biting someone was a forbidden thing to do. As she tells the story today, many survivors wonder how she ever survived biting a Nazi soldier.3

Eva and her twin went through processing, and were introduced to the Nazi doctor Josef Mengele, most famously remembered as the Angel of Death. He was often described as a proper man with outstanding mannerisms. In a place such as Auschwitz, Mengele stood out. His tall shiny boots and combed-over hair contrasted with the decay and death that permeated the camp. Auschwitz was the perfect place for an evil doctor such as Mengele. Here he had an unlimited supply of test subjects, who at the time had zero rights. No one overlooked his research or questioned the inhumane experiments that he conducted on the lives of hundreds. Although the Nazi regime deemed his experiments important, no scientific basis was ever found for the racial theories proposed in them.4

The girls were forced to act as guinea pigs in many of Dr. Mengele’s experiments. They sat naked up to eight hours a day, being measured and examined multiple times a week. On the days they weren’t stripped of their clothes, they were robbed of their blood and injected with unknown substances. After being injected with one of these substances, Eva became deathly ill. She even recalls Dr. Mengele, sarcastically laughing as he describes her having roughly two weeks to live. This is when Eva made a silent pledge to prove this evil enemy wrong and be reunited with her sister. Deathly ill, she was transferred to the barracks of the living dead as her conditions continued to worsen. While there, crippled by her illness, Eva forced herself to crawl across the floor in order to drink water, as she knew she needed fluids in order to survive. After battling death for three weeks, Eva had won and returned to the barracks with her sister and other twins. She had beaten death and proven Dr. Mengele wrong. If she could be brave while staring death in the face, she knew that she and her sister could survive. This animosity towards Dr. Mengele was a driving force for Eva and for her will to survive.5

Throughout her time in Auschwitz, Eva quickly learned what it took to survive the long nine-month fight for her life. She quickly became aware that if she cried over her situation, she would no longer see the sunrise the next morning. If she spent time crying, her opportunity to get bread or water would be missed, and that meant one step closer to death. And if she died, it also meant the death of her sister. If one twin died the other one would be murdered so that the doctors could run a comparative autopsy. The girls lived, not only for themselves, but also for one another. Their lives were now much bigger than just themselves and they realized that very early on.6

In November of 1944, after months of torture and living day to day, the girls began to notice changes–changes that fostered hope in the girls that was almost slipping away. By then, the camps had experienced air raids, and the experiments had stopped completely. American aircraft flying over Auschwitz helped refuel their hope for a new tomorrow. As the allies gained more and more ground, the Nazis ordered the girls from the camp. However, they refused to leave as they knew leaving would be surrendering their lives. Trying to hide their heinous crimes, the Nazis began to destroy the gas chambers and any other evidence that would tie them to the mass genocide that had taken place at Auschwitz. The barracks that had become home for the girls were burned down, and they were left to fend for themselves. Not giving up, the girls found ways to continue. Eva was a very good “organizer,” and was able to steal food and other necessities from the Nazis, allowing them to keep holding on to life.7

January 27, 1945 is a date Eva will never forget. It was a very quiet day, a complete whiteout due to heavy snow, and the girls could feel that freedom was coming. They didn’t know how or when, but they knew it was close. Days had passed when finally, another prisoner ran into the barracks informing the girls of their freedom. At first, they were not sure exactly what freedom meant; but Eva describes the words as magical. The Ukrainian-Soviet soldiers entered the camp offering the survivors chocolates, candies, and most importantly, hugs. After being deprived of love for so long, Eva described the hugs as being the most important thing that the soldiers could offer. Eva quickly realized that she and Miriam had triumphed over a great evil, and that the little promise she made to herself was now a reality. Freedom was sweet, but their worries were far from over. Acclimating back into the real world with no family was very difficult for the young girls, and liberation of the camp, unfortunately, did not mean leaving this nightmare behind. The things they witnessed and lived through while in Auschwitz continued to haunt them. Their bodies, permanently altered by the experiments, would never be the same. Miriam faced kidney issues throughout her life, due to an injection that stalled the growth of her kidney. This medical catastrophe made life very challenging, and it eventually led to her death in 1993.8

The liberation of Auschwitz was a triumph for the girls. Staying alive through the night was Eva and Miriam winning the battles, but this was them finally winning the war. Despite everything being against them, their will to survive allowed them to prevail in the most difficult of times. Eva and her sister continued to win this war many years later by sharing their story with the world and informing others of the horrors they and many others endured during the Nazi regime. Doing the unimaginable, Eva has publicly forgiven the Nazis and all who have done her wrong. This she explains is for no one other than herself and her journey of self-healing. Eva accredits the forgiveness for allowing her to experience real freedom in her life, the freedom from the pain and suffering that once clouded her soul. When she forgave the Nazis, she threw away the hold that their crimes had over her life. She even opened a museum in 1995 to honor her sister Miriam, and she continues to be a voice for survivors around the world. Frequently visiting the place that once wished to take her life, Eva leads tours and tells her story to all those who will listen. Ultimately, Eva wants humanity to love one another for who they are, never take freedom for granted, and forgive our enemies so in turn we can finally reach true freedom. As she says, “Forgiveness is a seed for peace. Anger is a seed for war.”9