Wadjet: The Eye of an Egyptian God 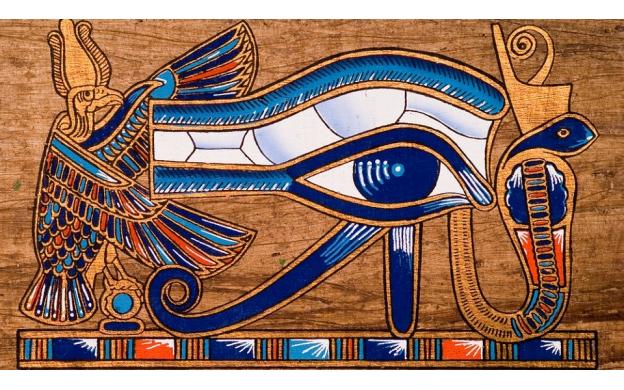 Horus, the god of both the daytime sky and of war, is one of the most interesting and confusing of the Egyptian gods. Horus is often depicted as a falcon, or at times as a man with a falcon head–as were many other gods such as Har, Heru, or Hor.1 What is known about him is that he is the son of Osiris and an enemy of Set, the god of the night sky. Horus was, in ancient times, considered to be the perfect god for unifying Upper and Lower Egypt, even before the actual unification took place. This is due to the fact that he was considered the greatest of the gods in both parts of Egypt. The pharaoh was actually considered to be an embodiment of Horus.2

This myth formed the foundations of ancient Egyptian religious faith. This is because when the pharaoh died it was believed that he would become one with Osiris, the father of Horus, ensuring Egyptians eternal life after death. Egyptologist Rosalie David explains, “As the incarnation [flesh-and-blood form] of the god Horus, and the son of Ra and divine heir, only [the pharaoh] could act as mankind’s agent in the presence of the gods. The Egyptians considered the rituals to be effective only if they were enacted by the king to whom the gods had given the rulership. Only he could attend to their needs and execute their orders.”3

Also known as Wadjet, the Eye of Horus is commonly seen as a symbol of protection. The symbol appears in much of the jewelry in the ancient world as it brings about “the safety and health of the bearer and provide wisdom and prosperity.”4 The actual eyes can still be seen today in that they were considered–literally–to be the sun and moon. When Horus was still young, Seth, his uncle and god of the night, tore out his eyes after murdering his father Osiris. This version of the myth is actually quite disturbing as it states that Seth tears out Horus’ left eye, and through an odd set of events loses his man parts! Thoth magically restores the eye after being called upon by Horus’ mother, giving it the name Wadjet, and it is for this reason that the waxing and waning of the moon occurs in cycles and the moon is torn away before its renewal every lunar month.5 On top of that, Thoth resurrected Osiris, granting him eternal life.

In one of the many versions of the myth, the right eye of Horus (representative of the sun) was torn out by Set during battle. Djehuty restored most the eye except for a small piece. This missing part is where the myth of Horus-eye fractions stems from. In this system, parts of the eye were assigned fractional equivalents ranging from 1/2, 1/4, 1/8, 1/16, 1/32, to 1/64.6 When added, these fractions total 63/64, known in mathematical circles as a reciprocal 2n series and a complementary fraction. The Horus-eye of fractions was used for measuring grains and medicines.7

The Wedjat symbol was depicted in a variety of ways in ancient Egypt. Many Egyptians would wear it as an amulet fashioned from gold, silver, granite, hematite, porcelain, or wood.8 It was worn to bring strength, protection, safety, and good health. In a ritualistic sense, the amulet was made as offerings during the summer solstice when the sun was “the most powerful.”9 In fact, the eye still represents a sign that is seen in today’s modern medical vernacular: Rx.10 The Wedjat was printed on papyrus documents containing medical information. The symbol has continued to be used on medical record in Europe, but over time it was replaced by the symbol of Jupiter from Roman mythology, and as even more time passed was changed to the symbol we all know today as Rx.

The Eye of Horus

Egyptian religion has been an interest of mine since I first learned about this in first or second grade. Something that has always been interesting to me has been the thought that in a polytheistic religion, some gods have much more power than others, and, as the article said, had natural born enemies. I think it is odd, but I’m sure they would see what I believe as odd as I see theirs.

I love the myth behind this story and what the Wadjet stands for. I have seen this symbol quite a few times before but this is the first time I actually learn anything of it. I really think that the way the eye was used for fractions in measuring grains and medicines is interesting and I wish there was more of an origin story behind it. This was a well written and intriguing article!

This was so interesting to read. Egyptian mythology is often used in pop culture or used as a fashion statement. I had no idea that the eye symbol went so deep or detailed. I enjoyed reading this and liked the way the author laid out the history of the Horus. I would not have guessed that the symbol was to represent the prosperity and comfort for the Egyptian people.

The most surprising part to me was how the eye was used mathematically. I wonder how exactly they used it to measure amounts of grain. Given most of the population were farmers, the fact that this eye can help count/sort grain, only enhances its significance in Egyptian society. I never would have thought that this eye were to be multi-purposed.

This article was so interesting and informational. I learned a lot that I did not know before. I found it so fascinating that they took what happened to his eye and applied it to the world mathematically. It lined up really well and I thought it was really cool. It’s always interesting to learn about mythology and how it still is very prevalent in many cultures today.

Its interesting to read about the way ancient civilizations always have an origin story for each day. I did not know that Horus was the God of daytime and war which was interesting. The Egyptians used the symbol of the eye to represent prosperity and now you can see this type of symbol on jewelry. The Wadjet was a symbol of protection for the Egyptian people.

The wadjet symbolizes the effect religion and beliefs have on individuals as the Egyptians wore it and used as a sign of strength and protection. This is still to this day, as Christians wear the cross for protection and blessings. The varying stories and blurred lines of the origin of the wadjet reminds of Greek mythology as there is a lot of varying stories about the mythical gods.

As an Egyptian mythology enthusiast, this article was refreshing! I read about the eye of Horus all the time. They have become one of the most well known symbols of Egyptian mythology. The eye of Horus have been referenced in many movies and books today. The scene between Set and Horus has also been shown in many movies related to Egyptian mythology. I really liked reading about the specifics in relation to the wadjet. It was very informative. I also liked the reference to the fraction system. I haven’t heard that one before!

This article is so interesting! I have always loved Eygptian history so this was incredibly fascinating to me. One of my favorite parts of this article was hearing the history behind the Wadjet. I had never heard of this the stories associated with it, so I thought it was very informational. The other thing I loved about the article is the description of the fractions of the eye.