The Freedmen’s Bureau and the Education of the Freedmen 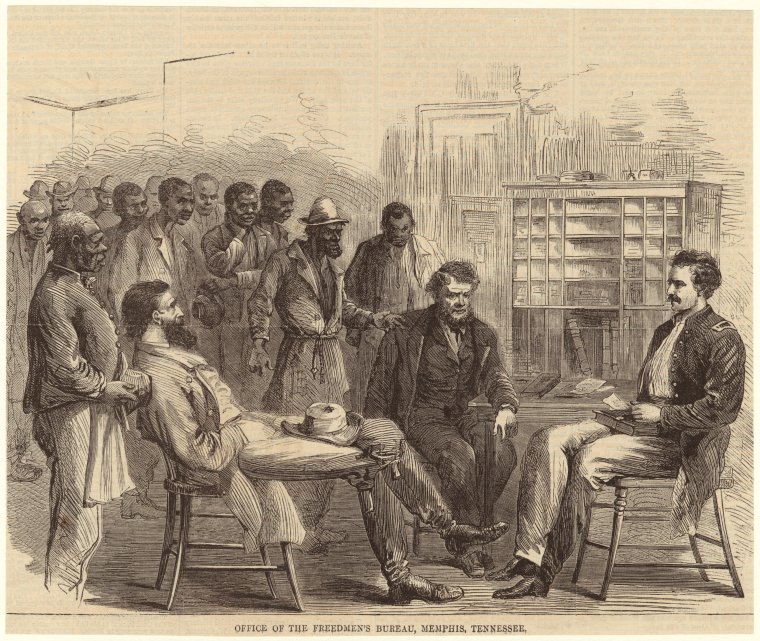 In March of 1865, just before the ending of the Civil War, the Federal government created the Freedmen’s Bureau.1 Initially set up to help the roughly four million freed slaves, it also had provisions for helping poor white Southerners who were similarly destitute after the Civil War. In fact, the Freedmen’s Bureau was designed to help those in need throughout the South.

The Bureau had provided needed necessities that included clothing, food, shelter, and education. It also helped many freedmen gain land ownership. Congress had several reasons for creating this act, but the main purposes were to maintain abandoned lands  in the South and to provide education for the freed slaves.2 Most freedmen wanted to obtain an education so they could make a start with their newly found freedom. It is fairly difficult to start a successful life without an education; therefore the bureau helped them out in many ways.

However, obtaining an education was more difficult than expected, even with the support of the Freedmen’s Bureau. Although the Bureau supplied the accommodations needed for the education program, the white Southerns had other plans for the schools. Most white Southerners were resistant to the idea of letting African Americans obtain an education. They believed that the newly freed slaves would get a false hope of equality, or would aspire to live as equals with whites. They feared that with their new freedom and education, the freedmen would be less willing to work for their former owners. They believed that providing freedmen with an education was a waste of money, because they believed that blacks were unfit by nature to profit by formal education. Others argued that any education of the freedmen would lessened his or her usefulness as a laborer.7 However, whatever the arguments were about the education program, the work of the Bureau proceeded.

Eventually, the white Southerns, fearing that the freed slaves would get an education, started taking matters in there own hands. They began taking control of the administration for education in the South. The provisions of the Freedmen’s Bureau made integrated schools possible, but virtually all whites opposed this idea. The first integrated school during the Reconstruction era was in New Orleans; however, whites refused to attend.8

Since the schools were being segregated, colored from non-colored people, the idea of having integrated schools in the South would have to wait another eighty years.

The Freedmen’s Bureau lent a helping hand to those in need, but besides that, they brewed greatness behind closed doors. I have done much research on the Freedmen’s Bureau and have learned about it extensively in the past. I enjoy reading new information on it and seeing others’ viewpoints. The author did a nice job of laying out exactly what it was and how it truly benefited freed slaves.

The Freedmen’s Bureau was an important association for the South because it provided an education to its people regardless of their skin tone. Even though, I have heard of the benefits of the Freedmen’s Bureau it was nice to learn a little more about the background of the organization. However, I do think it’s quite horrible how the whites wanted to change the bureau and were opposed to freed slaves obtaining an education. Overall, amazing work on describing the Freedmen Bureau.

I never heard of The Freedman’s Bureau and by reading this article it gave me a very good understanding as to what it was. I find it amazing that after slavery was abolished, that they gave African Americans a chance at an education. Although it was a complete success, it was a step forward to something great. Its great to hear about the good that happened in our history even though the bad made us learn, we have came along way in today’s society.

I never learned about this in United States history, and if we did it was just briefly mentioned. This is far more important than I thought. This group had faced so many challenges from the beginning even though it was originally for a good cause. This organization was a great support system for the African American slaves that had just gained their freedom in the South.

I had never heard of this movement that was done but I am glad I came across this. What Freedmen Bureau wanted to accomplish is so amazing! There was a lot of many people back then that did not want people of all colors to be under the same roof nonetheless being in the same room learning the same things. It’s sad to hear that white men did not want the slaves to have an education and took over the administration. Every single person deserves the right to an education.

I heard about this movement before but never knew much about it. What Freemen Bureau wanted to achieve is so amazing, there were so many people that were racist back in the day and did not want the “Colored” and “whites” mixed together with one another, or even doing the same things. Even to the point where the white slave owners did not was their slaves to have an education and took over the administration. I believe that every man, women, and child regardless of rage, age, ethnicity all have the same equal chance and rights and are all the same. I am so glad that many other leaders like MLK and Malcolm X changed history for the better.

I have heard of this movement before and it is amazing what the Freedman Bureau was trying to accomplish. It’s good that there was some form of help to the African American people to get right of basic rights. So many people were opposed to the thought of “colored” and “whites “during this time. The Freedman Bureau was able to fight these ideals and change the United States.

I remember learning about the Freedmen’s Bureau in history, however, I do not remember much detail on it. This article did a great job of providing background to the Bureau and everything that it has done. I think it is great that this movement took place as it is what helped with getting African Americans the rights that they deserved. This definitely paved a way for the future.