Martin Luther and The 95 Theses 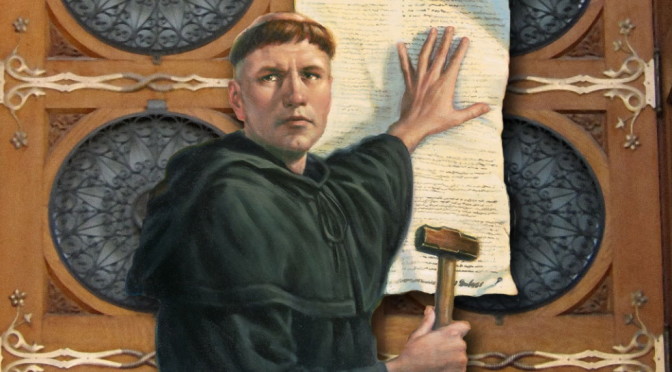 In 1517 Martin Luther was provoked by Johann Tetzel to write his famous 95 Theses. In the spring of 1517, Johann Tetzel, a German friar who practiced the selling of indulgences in Germany, was preaching on indulgences in the city of Jüterbog. By selling indulgences, Tetzel and the Catholic Church gained monetary value in exchange for a believer’s future diminished time in purgatory. In other words, one’s sins would be forgiven if one were to buy these indulgences. Luther, who was a Theology professor at the University of Wittenberg, attended to Tetzel’s preaching. Luther felt disgusted by the act, and as a Theology professor he felt that he had to address this issue in a scholarly way. During the summer of 1517 Luther started to write the 95 Theses, which was not only a criticism of the selling of indulgences, but also a criticism of many of the actions and practices of the Catholic Church, particularly of its hierarchy. 1

The 95 Theses consisted of Luther challenging the teachings of the Catholic Church on the nature of penance, the authority of the pope, and the selling of indulgences. He believed that the salvation of a person’s soul should not be based on one’s monetary contribution to the church. Luther believed that faith was the only way to reach salvation and not the monetary contributions to the church. Quoting Saint Paul, Luther wrote, “The just will live by faith.”2 In the 95 Theses Luther not only criticized the Catholic Church and its corruption, but also set numerous propositions for reforming the Catholic Church. After writing the 95 Theses, on October 31, 1517, Luther decided to nail them to the door of the Wittenberg Church. After this event, the 95 Theses started to be spread throughout Europe. A year after Luther wrote the 95 Theses, they were condemned as heretical by Pope Leo X, and Luther was also excommunicated from the Catholic Church that same year.3

Martin Luther was given the chance to recant his statements against the Catholic Church at the Imperial Diet of Worms in 1521, but he refused. Luther famously said:

Unless I am convinced by the testimony of the Holy Scriptures or by evident reason—for I can believe neither pope nor councils alone, as it is clear that they have erred repeatedly and contradicted themselves—I consider myself convicted by the testimony of Holy Scripture, which is my basis; my conscience is captive to the Word of God. Thus I cannot and will not recant, because acting against one’s conscience is neither safe nor sound. God help me. Amen.4

Being a Catholic myself I am grateful for the work Martin Luther did to change the ways of the Church. Things you see in the world today that seem fairly normal took hard work to get to where it is. For example integration in schools is completely normal, but back then people were ignorant and stubborn much like in this article. All it takes is one person with enough drive and enough will to make a change for the better.

Great article! Martin Luther was a man of great faith and strong convictions. Luther’s 95 Theses effectively critque the idea of indulgences and similar contemporary practice of the time. It’s unfortunate that Luther was excommunicated but he understood the consequences of his actions. In the face of Pope Leo disapproval, Martin Luther stood for what he believed in.

I remember learning about this in my high school History of the Americas class. However, I was able to learn interesting facts such as that Luther was a theology professor and since he did not like that people were paying for their sins to be forgiven, he decided to write the 95 Thesis. Luther was able to make history as he nailed the 95 Thesis to the doors of the Wittenberg Church since many people left the Catholic church after this.

When hearing about Martin Luther I find his act of questioning very admiral. He stood up for what he felt was right and was brave enough to put up his 95 theses. To be honest the whole money scandal sounds suspicious enough as is, the faith is what’s important not the wealth. With the power of faith alone is enough to cope with our sins. Personally in this day in age religion isn’t as forced as it used to be and I think having the choice in what to believe in is great. Faith is important for those who wish to have it.

Learning about new religions is one of my passions and learning more about the theses was so much fun. I never knew that Luther wrote the these because the catholic church was not upholding faith and being tyrants just to get money. Honestly, Luther had the right mind set for criticizing the Catholic Church for this issue. However, as a catholic, I do feel grateful that Luther did this in order to start a change amongst the Catholic Church. Overall, it was a very informative article and I heavily enjoyed reading it!

I had studied about Martin Luther in high school but I definitely learned more about him from this article. It was great of him to do what he felt what was right for the Catholic Church. From his time as a theology professor and seeing what was being done in the Church, he felt the 95 Theses would be needed to make a necessary change. Much of the way the world is today should be credited to Martin Luther and what the 95 Theses entailed.

This article was an interesting read because I have never learning about Martin Luther before and the 95 Theses. I think this article gives great background information on what lead to Luther writhing out the 95 Theses and calling out the church for making people buy indulgences in order to get rid of their sin. Martin Luther was a great catholic man to call out these other catholic churches for what they were doing and how they needed to change.

I remember learning about Martin Luther in high school throughout world history but was able to get a better understanding from this article. I had no idea Martin Luther had been an actual Professor of Theology at the time and that his purpose of writing his 95 theses sprouted from the idea on monetary donations in exchange for forgiveness. Overall, his purpose was not done in hatred for the religion or the church but mainly the ideas they were upholding for the people to believe. This was an interesting and very informative article overall that I really enjoyed!

It kinda sucks that Martin Luther gets overlooked in history due to people nowadays thinking you’re talking about someone else when you say Martin Luther. Because Martin Luther helped changed the European world with his 95 theses. Also, I just learned that it wasn’t until recently that the Catholic Church acknowledged that they were wrong about Luther. I just thought that was interesting. Anyways, a very well-made article and I hope to read more by you.