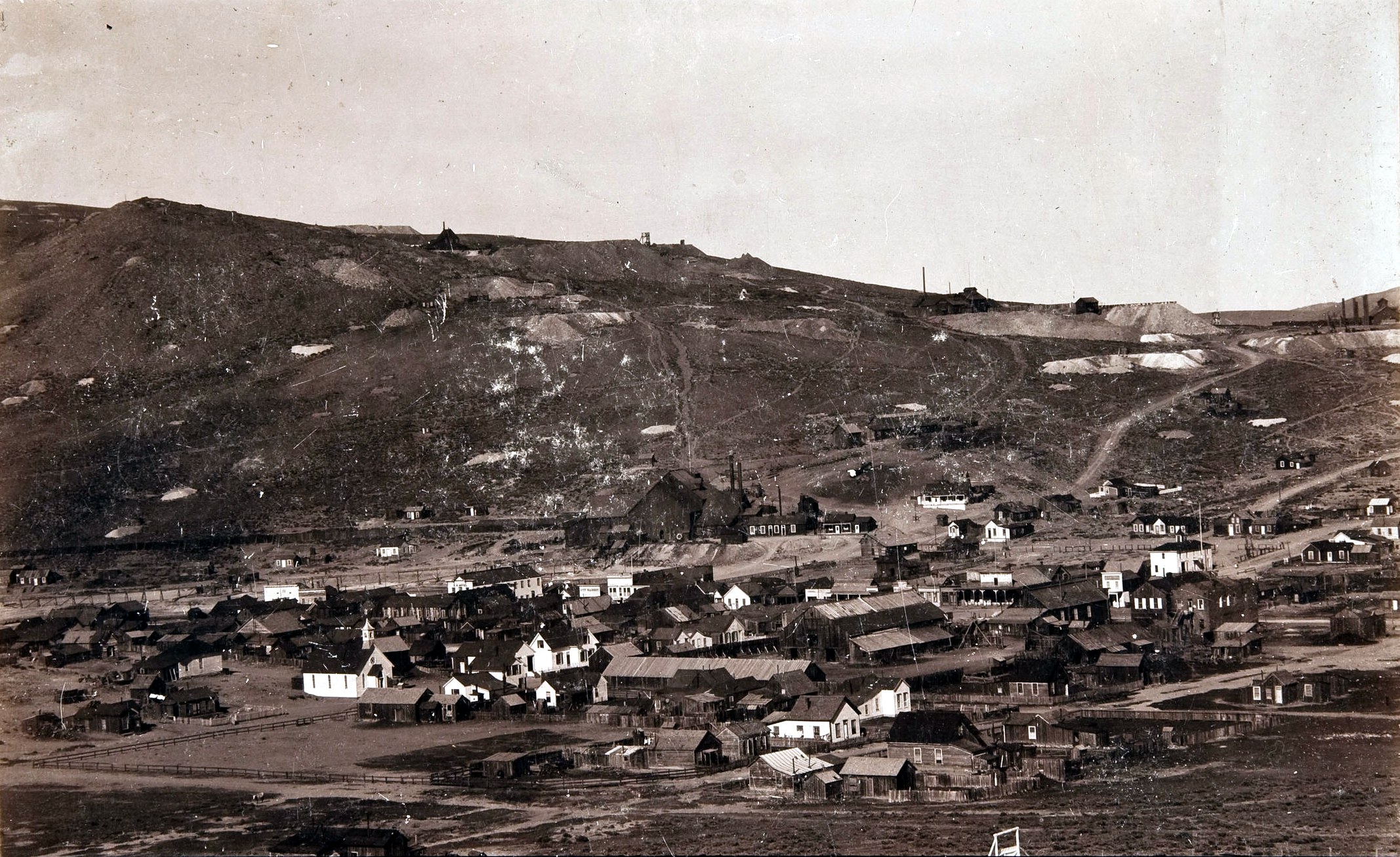 Dust blows across an empty gravel road. Abandoned wooden buildings stare up at an empty bluff. Down the town’s long road, just past the church and collapsed bank, is an incline shaft. The shaft is dead, and so are the ghosts that supposedly haunt it and the town. This town, Bodie, hasn’t been alive since the 1950s.

Originally, Bodie was a mining camp founded by a handful of Californians, including Pat Garraty, William Boyle, Terrence Brodigan, and W. S. Bodey (who was the one to name Bodie). The group stumbled upon gold-filled ground around 1858, only to move on hoping to return in the spring. However, Bodey had other plans. With another companion, Bodey returned to the site with more supplies to survive the deathly winter. After winter passed and word of the fertile mines spread, the mining camp filled with more new inhabitants hoping to find great wealth.1.

Even though the mining camp was filling with people, it still lacked a name. It wasn’t until the following winter, in November of 1859, that Bodey died trapped in a blizzard while on a trip to get more supplies. In honor of his death, the camp would be called “Bodey’s Diggings” or “Bodey” for short, which would later be adapted to Bodie. 2.

But how did this mining camp grow into a town and then later into a ghost town?

With gold mining cities in close proximity to Bodie, the hunt for various ore in the area was on. Everyone wanted their own piece of the gold pie. In 1863 and 1864, mineralogist and geologist William P. Blake and Professor of Chemistry Benjamin Silliman traveled to Bodie to inspect the veins, concluding that “Bodie’s Mines showed great promise.”3 Soon after, the Empire Company purchased property in Bodie with the prospects of opening new mines, and the Bodie Bluff Consolidation Mining Company, the Bodie Consolidation Gold, and Silver Mining Company followed suit. The more companies invested into the site, the more the town grew in both population and profit. Bodie was starting to boom.4

The town grew as over 100 hand miners began to flow into Bodie along with at least 50 Empire Company workers. Already, two stores had opened and the preparation “for numerous whiskey mills and hash houses” was underway, as an onlooker from Inyo Country wrote in 1877. This sort of growth suggested that the town would grow to be more than just a mine, becoming instead a place for families to settle. Bodie was becoming a place for miners to make profit and for businesses as well. Stocks began to sell for one dollar a share, adding to the total profit of Bodie. 5

As more residents discovered gold, more men came into the town. By 1879, the population of Bodie was between 5,000 and 7,000.6With twenty-five mines open, the flow of money to miners was constant, incentivizing the hard working men to settle down. As predicted, Bodie was no longer just a mining town full of men looking to strike it rich. It was becoming an established town, in which families could move into alongside miners. Because of the permanent residents, the town had built up the Bodie House, a hotel, with the Miners Union Hall immediately behind it, and the Champion, Grand and Oakland House hotels provided housing, restaurants, and a barber shop. It was no longer a standard camp, set up for miners to dig, get their pay and leave. Solid buildings meant to last through the harsh winters were constructed, replacing temporary tents. The town had even acquired their own newspaper, The Daily Bodie News, as well as a real estate office immediately next door, ensuring incoming families that there would be permanent residency for them.7

It wasn’t until 1880 that Bodie started to show signs of decline. Single, young miners looking to strike rich, quickly grew tired of the wage pay that the Bodie mines had instilled. They began to move away to nearby mining towns where they were paid based on the quantity of gold mined, rather than on hours worked. Although family settlers remained, much of the mining workforce was beginning to branch off into other directions.8 Although there was a short revival with new technologies, mines still began to close. In previous years, production had reached as high as three million dollars in both gold and stock profit in 1881, 9 but by the early 1900s, profit had severely plummeted as workers left and mines became less productive. In 1914, the profit shrunk under $7,000, only spiking in the 1915 when there was an attempt to revive a previously closed mine. Although profits climbed back to $1oo,ooo, it would never equal the booming millions that the mines had originally experienced. Eventually costs would be too high for all mines to stay open. 10

Finally, World War II forced Bodie’s last producing mine to shut down. Mining never resumed once the war was over, but in 1961, the town was declared a National Historic Landmark. The following year, the state authorized Bodie to become its own State Historic Park. Today a total of 170 buildings survive in Bodie with just over 100 still standing perfectly intact. Each building has been preserved and remnants of the daily life of a Bodie citizen can still be seen inside each house and building. Even the mines have been preserved, and there are many tours that can take curious onlookers around the supposedly haunted ghost town. 11.