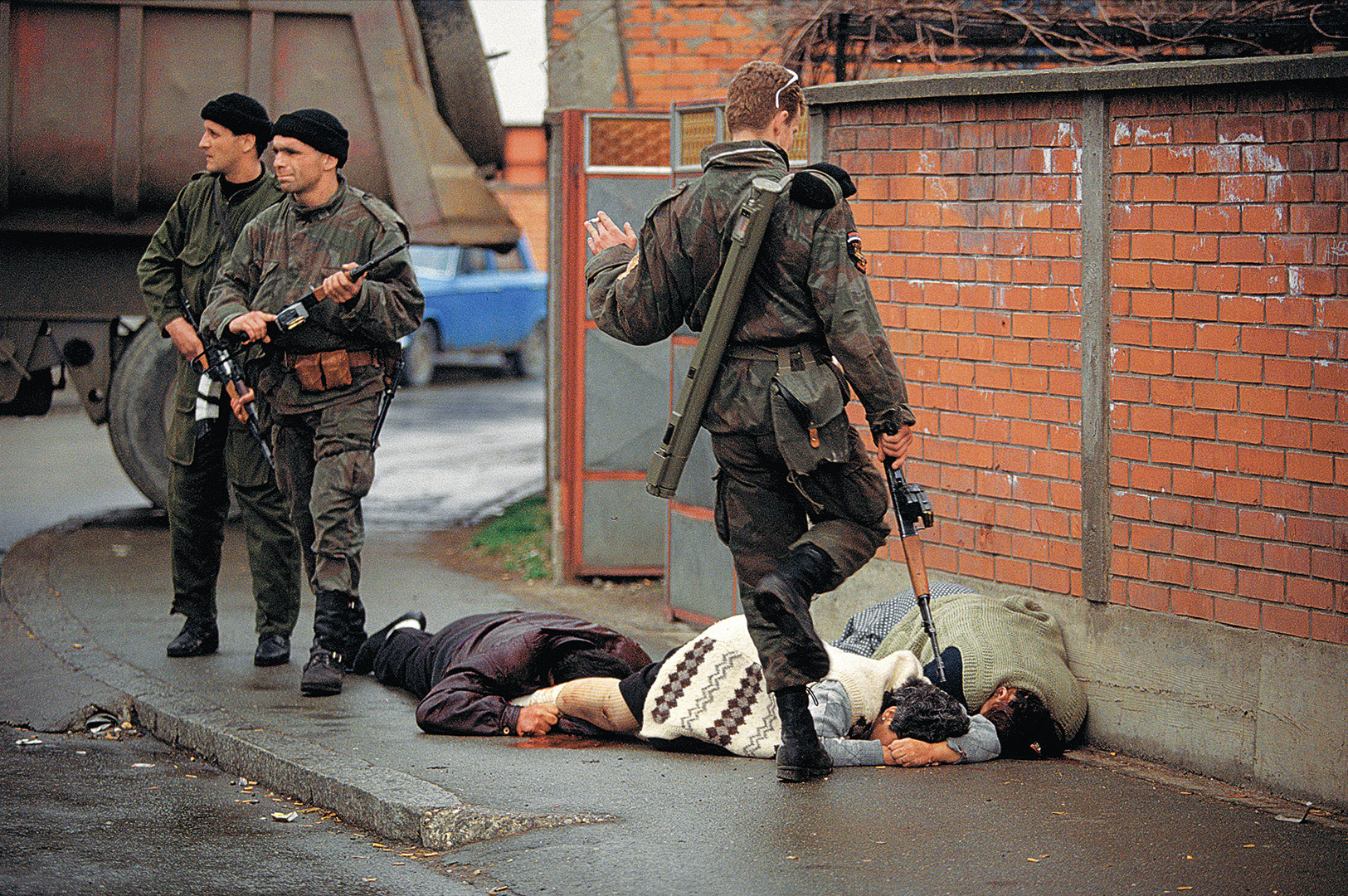 When determining the nature of a war, we often look at the events leading up to it. Whether it be economic instability, political inaptness, or social and cultural determinants, it can be figured out. However, approximately 25 years ago, the Bosnian War was not considered a genocide, due to the severity of the conflict and the implications that the term genocide carried at the time. By definition, a genocide is “the deliberate and systematic destruction of a racial, political, or cultural group.”1 In this state, however, genocide failed to be the term used to describe the atrocities that occurred during the Bosnian War. Instead, the term ethnic cleansing was utilized as a facade to divert the public from the real problem of this war. And indeed, the cover-up worked for a few years. Nonetheless, the debate whether Bosnia was suffering a genocide or simply ethnic cleansing still existed well after the war ended. So, the question remains, did Bosnian Serbs ever engage in genocide? And if so, why did the U.S. delay its response to aid Non-Serb Bosnians in this time of crisis?

In June of 1991, prior to the war’s beginning, Bosnia held a referendum on independence and voters chose to secede from Yugoslavia. Slobodan Milosevic was one of the Serbian Presidents of Bosnia at the time. Convinced by their leader, Bosnian Serbs chose to separate from Bosnia as well and create their own state within Bosnia.2 This was not agreed to by all Bosnians, but Milosevic was persistent and manipulated the political, or national, identity of Bosnia. By this year, Bosnia’s population consisted of 44 percent Bosniak, 31 percent Serb, and 17 percent Croatian.3 Nonetheless, Serbs wanted to dominate Bosnia. Milosevic utilized a method similar to Hitler’s, in which he made Serbs appear the dominant race in Bosnia. He emphasized the difference in religion, which was a crucial component of each group’s identity. Serbs were practitioners of Orthodox Christianity, whereas other Bosnians largely practiced Islam.4

Any group that did not belong to the Serbian religion was then utilized as a scapegoat by Serbs in order to highlight their inferiority. The conflict began with demeaning slurs and escalated into violent hate crimes. Serbs wanted to make Bosnia homogeneous, so they took to military action. Additionally, they had an advantage because they obtained their arsenal from the “Serb-dominated Yugoslav National Army.”5 By 1992, this became what some considered to be a Civil War taking place between Bosnia’s different ethnicities. However, the reality was that Serbs were systemically killing off Non-Serbs living in Bosnia. These Non-Serbs consisted of Croats and Muslim Bosnians.

Initially, the Bosnian War, as most countries called it at the time, was deemed a war between different ethnicities, where Serbs were just trying to reclaim the land they believed to be rightfully theirs. The Yugoslavian army was Serb-dominated, and it therefore backed all Serbian procedures at the instruction of Slobodan Milosevic.6 Edicts, or official orders, were issued by the Serbian war presidency. In Celinac, a northern Bosnian town, this began by imposing a curfew on Non-Serbs from 4 p.m. to 6 a.m. Moreover, Non-Serbs were not allowed to:

“meet in cafes, restaurants, or other public places, bathe or swim in the Vrbanija or Josavka Rivers, hunt or fish, move to another town without administration, carry a weapon, drive or travel by car, gather in groups of more than three men, contact relatives from outside Celinac (all household visits must be reported), use means of communication other than the post office phone, wear uniforms: military police, or forest guard, nor sell real estate or exchange homes without approval.”7

Local factories “introduced quotas to limit the number of Muslim or Croat employees to 1 percent of the overall workforce.”8 In Eastern Bosnia, they forcibly evicted Non-Serbs from their towns, often with no warning. By the end of 1993, the Serbs controlled close to three-fourths of Bosnia.9

This was how the Serbs turned to ethnic cleansing, which was considered “the expulsion of a group of people from a geographical area and not the actual physical destruction of that group.”10 Serbs followed the idea of “Say nothing; do these things; do not describe them” as Holocaust historian Raul Hilberg put it. This was the general idea when genocide was practiced.11

That was the reality that many countries, including the United States, refused to recognize. The Bosnian War of 1991-1995 was, in fact, a genocide. This became clear with the Srebrenica Massacre, one of three towns that the Bosnian government still had control over. The United Nations had placed peacekeeping forces here in 1993 in order to protect Non-Serb Bosnians fleeing from the war. These forces, however, were not enough when the Serb army forced its way into the town.12 Srebrenica was the place where Serbs crossed the line between ethnic cleansing and genocide, “the deliberate and systematic destruction of a racial, political, or cultural group.”13 Serbs systematically exterminated Non-Serbs by taking Bosnian women and girls and placing them in concentration camps. In these concentration camps, these females were stripped of their dignity and rights. They were raped and sexually assaulted often until they became impregnated with Serbian seeds. This was done with the aim to eliminate the Bosnian race and to increase the Serb population.14 As for the male Bosnians, sometimes Serb forces “forced fathers to castrate their sons or molest their daughters.”15 All the men, ranging from newborns to the elderly, were either killed on the spot or taken to mass murder sites to be executed. The murders committed towards Bosnians in Srebrenica range between seven and eight thousand. No matter the action, Serbs had a deliberate policy of destruction and degradation to ensure that the Non-Serbian Bosnians knew that they were below the Serbian race.16

“The purging of Non-Serbs was not only an explicit war aim of Serb nationalists; it was their primary aim.”17

Through this massacre, Serbs participated in war crimes as well as crimes against humanity. War crimes are the violation of laws of war, which was done because Serbs killed prisoners of war.18 Crimes against humanity is the mass killing of a large number of the civilian population, and “a form of genocide that occurs during wartime.”19 Genocide focuses on the mass killing of a particular group, which in this case was the Non-Serb Bosnians.

In 1995, the Srebrenica Massacre, along with the Sarajevo market bombing, finally caught the attention of international forces. Humanitarian intervention took place. The United States along with the North Atlantic Treaty Organization (NATO) aided Bosnian and Croat forces by bombing Serb positions as well as providing a ground offensive. This led to Milosevic agreeing to enter peace negotiations hosted by the U.S., which “resulted in the creation of a federalized Bosnia divided between a Croat-Bosniak federation and a Serb republic.”20

But why did it take the United States four years of the Bosnian War and Serbians demeaning other Bosnians to intervene in the war? The U.S. was aware of this genocide occurring and made no advance to aid Bosnia until it was too late and thousands died. At the time, they claimed they never realized the war was actually a genocide occurring. Instead, they looked to the European Union to fix the problem. However, well into the Balkan Wars, European weaknesses were exposed. Still, the U.S. decided to rely on European Union to claim responsibility in a solution to the Bosnian War, knowing that their leadership was nonexistent. Essentially, they appeared to avoid any sort of involvement in Bosnia. They just stood by, allowing it to happen.21

In our day and age, we tend to have a clear idea of the term “genocide.” However, in 1991, when the Bosnian War was just beginning, the United States did not step up to its title of a global leading power. They did not attempt to stop Serbians from first demeaning and subjugating other Bosnians, then killing several thousands of them due to oblivion from the U.S.’s part. It is important to define situations for what they are, rather than hiding behind terms due to the fear of their power.

Today, we see the Bosnian War as what it was, the Bosnian Genocide. The Serbian Army in Bosnia participated in terrorism, ethnic cleansing, as well as genocide against Non-Serbs.