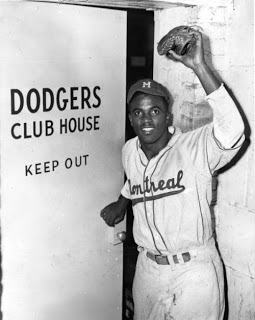 Jackie Robinson, a man of courage, determination, and record-breaking events, was born on January 31, 1919, to a single mother who raised him along with four other siblings. This little boy grew up to change the views and opinions of African-Americans playing baseball in the Major Leagues. Jackie Robinson became the figure that would embody African-Americans competing in “a white-man’s game” and broke through that barrier of racism. Through the years growing up, Jackie competed against his older brother, Matthew Robinson, in whatever game they were playing. His older brother competed in the 1936 Berlin Olympics in the 200-meter dash, winning a silver medal just behind Jesse Owens. Matthew was the person who inspired Jackie to pursue his talents and to dream big. That is exactly what younger brother Jackie Robinson did, despite the racial controversy that lay ahead.

Jackie Robinson attended UCLA and became the first student athlete to win varsity letters in all four sports: baseball, basketball, football, and track. Unfortunately, in early 1941, just shy of graduation, Robinson left college “convinced that a college degree would not help a black man get a job during the Great Depression.”2 In the fall of 1941, Jackie moved to Honolulu, Hawaii to play football for a Semi-Professional team called the Honolulu Bears. Sadly, Robinson’s season was cut short due to his enlistment into the Army for World War II. He served in the Army from 1942 to 1944, ranking as high as 2nd Lieutenant. After being honorably discharged from the Army, Jackie Robinson’s life changed the world forever through the sport that he least excelled in, baseball.

The baseball world dealt with its own segregation views. “Segregated baseball showed the great injustice of Jim Crow, yet the Negro Leagues (the generic name for the organized black major leagues from 1920 through the 1940’s) also provided opportunities for black players, executives, and towns to thrive in unequal United States.”3 Jim Crow laws were laws that segregated facilities into white and African-American, and were common throughout the South. The game of baseball in the South only allowed White participants, players, and fans. African-American players, fans, and owners were denied and treated unjustly because of the color of their skin. “Tradition, based on deep-seated racial views of African Americans as inferior in sport, indeed, in all aspects of life, turned out to be the biggest barrier to integration.”4 Jackie Robinson broke these barriers with the help of a man named Branch Ricky.

In 1943, Branch Ricky was the president and general manager of the Brooklyn Dodgers. Ricky believed in Jackie Robinson and knew how talented he was. He wanted Robinson to be out there on the field with other Major League Baseball players, where he belonged, with the best. Branch Ricky was determined to erase the color line in baseball, and he knew Jackie Robinson would be the perfect candidate for this goal. “At the historic interview of August 28, 1945, Robinson expected to be signed to a Brown Dodgers contract but Ricky soon showed his cards. He wanted Robinson to sign with the white Dodgers and become the man who would erase the national pastime’s color line.”5 The famous dialog between Branch Ricky and Jackie Robinson started with Robinson asking Ricky a question that foreshadowed the type of player he would be in the years to come: “‘Mr. Rickey,’ asked Robinson, “do you want a ballplayer who’s not afraid to fight back?’ No, Replied the Dodgers’ president, ‘I want a ballplayer with guts enough not to fight back.’”6

A few months later, in February 1946, Robinson and his newlywed wife, Rachel Isum, his college sweetheart, traveled to Daytona Beach, Florida for the Royal’s spring training camp. “Staring down Jim Crow at Daytona Beach’s City Island Ball Park on March 17, 1946, in an exhibition between the Royals and their big league affiliate, the Dodgers, Robinson became the first black player since Moses Fleetwood Walker in 1888 to take the field against a major league team.”7 Although Robinson was known for being great at baseball, he had a slow start. During camp, when Jackie Robinson did not compete at the standard being set for him, commentators began to question his credentials and accused him of having special privileges. Without being discouraged, Robinson played the game he loved with respect and humility.

Despite how poorly Jackie Robinson was treated because of the color of his skin, he did not let other people’s opinions factor into his mindset. Teams did not want to play the Montreal Royals, because they had an African-American in the line-up. Players also tried to hurt Robinson when he was playing on the field. “In Buffalo, New York, Bison’s players spiked him as they slid into second base, knocking him out of the lineup for three weeks.”8 On April 15, 1947, playing the Boston Braves, Jackie Robinson became the first African-American to play in an official major league baseball game. The Dodgers would go on to win the National League pennant, and Jackie Robinson was named Rookie of the Year in the Major Leagues.

In the next two years, baseball began to slowly integrate; the pressure on Robinson began to ease up. Jackie Robinson went on to be known as one of the greatest baseball players of all time. He remained steadfast in his pursuit for justice and civil rights. He wrote letters to Presidents Harry S. Truman, Dwight D. Eisenhower, John F. Kennedy, and Lyndon B. Johnson thanking them for their support of civil rights.  On October 24, 1972, Jackie Robinson died of a heart attack, at the age of fifty-three. His jersey number 42 was retired in 1997. In 2004, Major League Baseball proclaimed April 15th annual Jackie Robinson Day, where the players began to wear the number 42 in his honor. The tradition continues to this day.

That is crazy how Jackie Robinson was able to play baseball at such a high level with everything that he went through. He will always be considered the Goat of Baseball breaking through barriers no one before him has done. The thing that really blows my mind is his brother getting second place only because he was going against the Usian Bolt of there time Jessie Owens. That Robinson family must have had some incredible jeans to be that athletic. Great article with iconic photos.

Jackie Robinson’s story breaking down racial barriers is very inspirational. I have a lot of respect for the actions that he took to stop these injustices. Through out the process he was able to keep his calm and not blow up even while so many people were doubting and disrespecting him. His actions allowed not only the sports world but also many other communities to begin to see the importance of diversity.

This article is so inspiring and motivational. The author did an excellent job telling the story of Jackie Robinson. It is incredible how only one person with courage and determination could help change and improve the future of a sport. I don’t know much about baseball, but it was unacceptable how poorly Jack Robinson was treated because of the color of his skin, and incredible how he didn’t allow other people’s opinions to get in the way of his dreams to play professional baseball. The article shows that every dream is attainable and can have a wonderful impact on the world, and it is great how the author portrayed this story and made it very interesting to read.

Baseball has been a part of my life since I can remember. I love hearing about athletes overcoming adversity and becoming well known. Jackie Robinson is the first African American to play baseball and he is one of the bravest. Everyone had it out for him, sometimes even his own teammates, but he did not care. All he wanted to do was play baseball to highlight and enjoy his true passion for the sport. This article is inspiring to all people, not just athletes. He was able to overcome all types of adversity and even keep his composure while people were discriminating against him. The movie, 42, is a great visual for some of the adversities he had to overcome.

Growing up I loved learning about Jackie Robinson, and the obstacles he was able to overcome. During the time period of civil rights, Jackie showed so much will power and perseverance throughout the racial injustices he faced. He was able to make a difference not only African Americans but for others as well. He was a true legend that will be continued to remember forever.

This article was super cool and I absolutely loved the images that go along with this story and really help bring it to life. Jackie Robinson’s story is so awe inspiring and I love the fact that he helped break down so many barriers in a sport that I like to watch. This article was a beautiful ode to Jackie’s life, thanks for writing this.

Jackie Robinson was a beast on the field and the amount of hate he got was only for its time it’s crazy to me how he changed so much just by playing the game at such a high level. It wasn’t even just playing it was how the fact that he played with so much going on while playing. Not only did he have to worry about his job but he have to worry about the people threatening him after

I don’t watch baseball too much, so i wouldn’t know too much about this sport. However, because of this article it helps me better understand the game and challenges Jackie Robinson face throughout his career. It is crazy how much discrimination he faced back in his era. All he wanted to do was to follow his dream and play the sport he loved but those around kept on discouraging him with racial and aggressive comments. Even though those people interacted with him, he still accomplished his goal of going pro.

We all know who Jackie Robinson is, or if you don;t know who he is, you should know about him after reading this article. Jackie Robinson is a legend and a leader who played baseball and made a name for himself since then. He was a very great athlete who did whatever it took to be great. This article explains a lot about him and who he is as a person on the field and off the field. There is a movie called 42, which was a netflix for some time, which is based on Jackie Robinson. If you watch that movie you can really see what he has been through in his life to get to where he is now. I really enjoyed reading this article and learning more about Jackie Robinson.

This is a great article. I knew who Jackie Robinson was and what he did for the sport. But I don’t think people can even imagine what he went through just trying to play the sport he loves. He was trying to making a living doing something he enjoys and was having his life threatened every night he did. This makes me respect him even more knowing all the challenges he faced and never gave up.