Dolley Madison: The Women With No Fear 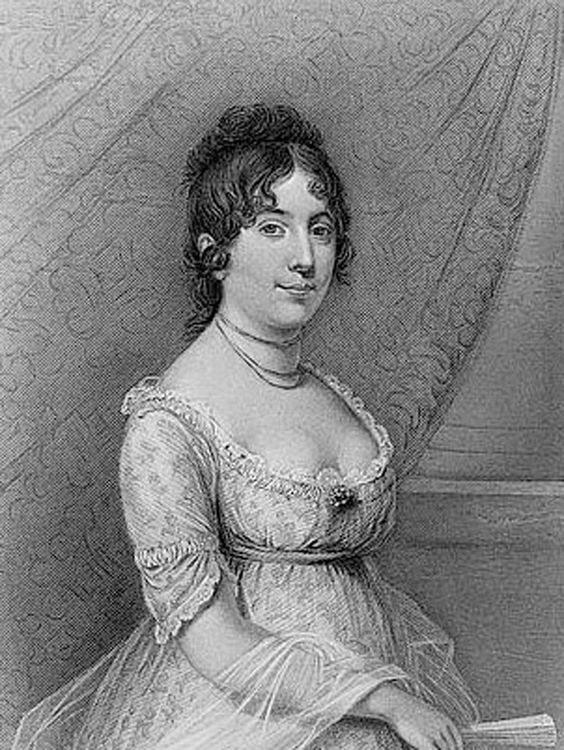 Dolley Madison was raised on a plantation with her family of nine in New Garden, North Carolina. She had seven siblings and her parents, John Payne, Jr. and Mary Cole Payne.1 After she reached the age of fifteen, her father sold their plantation because he did not believe in slavery. With the money he had accumulated over the years, he left the countryside to start a business in Philadelphia.2 Dolley Madison’s father slowly began to lose his business. He was not a very good business man. After losing his business in 1789, Dolley’s mother began to rent out rooms of their house to other people.3

Dolley was known for being a very beautiful woman. Many men lined up to ask her to marry. It was not until she was twenty-one years old that she met her first husband, John Todd.4 Within a year, the two were married and within three, they had two sons. Unfortunately, John Todd and Dolley’s youngest son were killed when an epidemic of yellow fever arrived. This unfortunate event left Dolley Todd alone with her oldest child.5

After losing her husband, Dolley did not stay a widow for long. A man she had met when she was nineteen years old at the Constitutional Convention began to woe her. James Madison was one of her many fans who had tried to court Dolley many years prior.6 The odd thing was that James Madison was not exactly the kind of man that women found attractive. He lacked many attributes that women usually found admirable. He could not dance or ride a horse, and he was seventeen years older than Dolley.7 These factors did not sway Dolley’s opinion of the “Father of the Constitution,” and she agreed to marry him. Later in their marriage, she converted to Episcopalian and abandoned her Quaker affiliation.8 After this discovery by her family, she was quickly disowned and left with only her son and her new husband, James Madison.

James Madison served as the Secretary of State under Thomas Jefferson for his two terms. While under his presidency, Dolley Madison was asked by Jefferson to be in charge of the social affairs of the White House.9 She was given this position because she seemed to have loved everyone she met and treated everyone equally with care. When Jefferson decided not to run for a third term, he decided that there would be no better fit for president than the “Father of the Constitution,” James Madison.10 Dolley Madison was seen as one of the best first ladies of all time. She was constantly recognized for the way she upheld herself and was loved by everyone. She was even sometimes called “Queen Dolley.”11

During James Madison’s first term in office, he faced a war with England in the War of 1812.12 In the year 1814, the British marched into Washington D.C. and toward the White House, where Dolley and James Madison were staying. As Dolley saw the British approaching, she ignored all the people in the White House who were telling her that she needed to leave. Instead, she began to load all the valuables from the White House, such as fine china, important documents, and the famous portrait of George Washington by the artist Gilbert Stuart.13 After loading as much as she could, she then left the White House. When Dolley Madison saved that painting and all the artifacts, she did not know she was leaving her mark on history. She changed the way the White House social affairs were held and saved one of the most valuable paintings in the United States. She was a very determined woman that left an impact on everyone and everything she came in contact with.