Rosie the Riveter: We Can Do It! 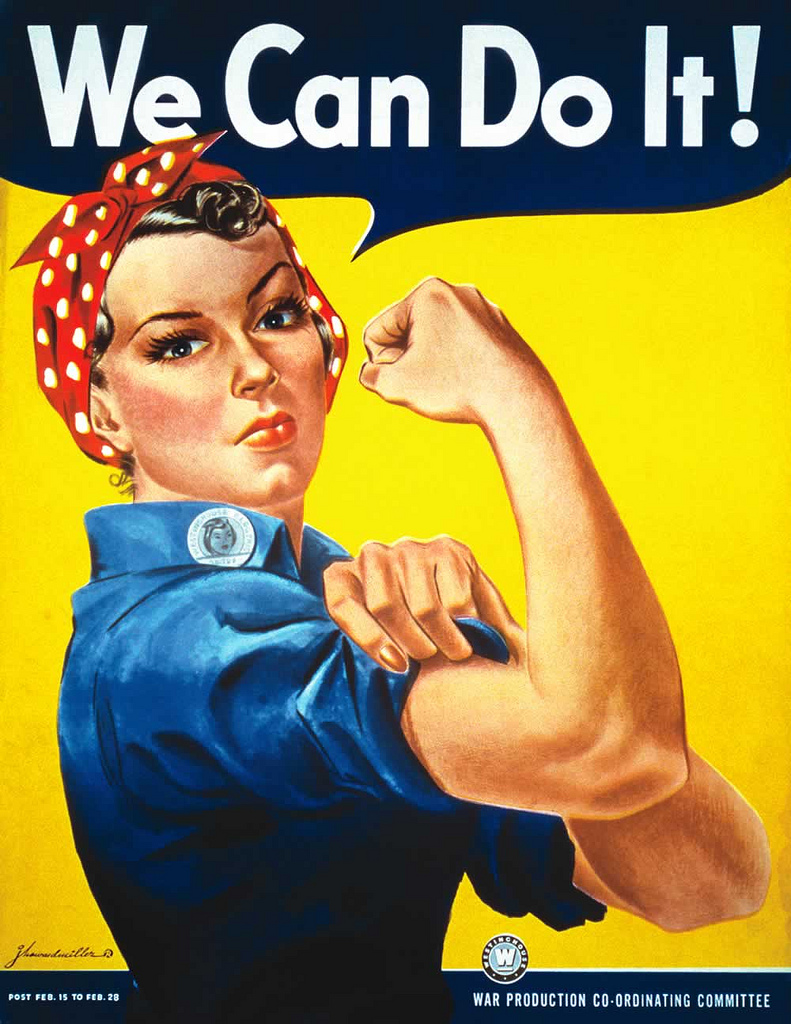 From 1941 to 1945, during World War II, many woman were needed in the workplace because millions of men had joined the armed forces to fight in the European and the Pacific theaters of the war. In the Depression years just before this, women had been encouraged to stay at home, and let the men take the reduced number of manufacturing jobs available.1 With the onset of the war and the dramatically increased demand for manufactured wartime products, factories across the country opened their doors to women workers by the millions. In fact, there was a concerted effort to enlist women into the work force. In 1942, artist J. Howard Miller created the popular image of a woman named “Rosie the Riveter.” This poster was initially named, “We Can Do It!” and was made for the Westinghouse Electric and Manufacturing Company. Rosie was represented wearing makeup, a polka dot headband, and a rolled up sleeve shirt that portrayed strength and independence in women.2

Rosie the Riveter was a fictional character that many woman in the workforce identified with. The initial purpose of her image was to influence women to see themselves as capable of doing work previously thought to be men’s work. Her image combined beauty and strength, which is why many woman saw her as a role model. Even though Rosie the Riveter was a fictional character, her image was actually based on a photograph of a woman named Geraldine Doyle, who was a Michigan factory worker.3

There were some jobs that women took on that required training. Because of this, their wages were higher due to the fact that their jobs were more challenging and engaging compared to jobs that they may have had before. During the war, eighteen million women referred to themselves as being “Rosies.” Out of these eighteen million Rosies, six million had the opportunity to work for the first time. These women understood that the U.S. military and economy needed them; however, what motivated them to work was their own patriotism.4

In 1942, before Miller’s poster was created, Redd Evans and John Jacob Loeb wrote a song called, “Rosie the Riveter.” This hit song had lyrics that acknowledged and recognized the work that women did during the war:

All the day long whether rain or shine
She’s a part of the assembly line
She’s making history,
working for victory
Rosie the Riveter.

Keeps a sharp lookout for sabotage
Sitting up there on the fuselage
That little frail can do
more than a male will do
Rosie the Riveter.5

The song became associated with the existing images of Rosie the Riveter, which was a perfect blend of patriotism and beauty and strength in women.6

Unfortunately, after the war, the jobs and wages that Rosies had adapted to their lifestyles came to an end for the majority of them. Some went back to working “less challenging” jobs, and some became stay-at-home mothers. Because of this, birth rates increased, which led to the baby boom that lasted from 1946 through 1964. Even though many women went back to their previous lifestyles, they claimed to have left the workforce more confident and had more self-worth, knowing that they had proved to society that they were capable of doing men’s work.7

World War II changed the lifestyles of women significantly. Going from housewives to working in different industries allowed women to prove to society that this type of work was not just for men. There may have been no intention for women to prove themselves what they are capable of; however, women did leave their jobs after the war feeling better about themselves. Rosie the Riveter remains an iconic figure in American history, representing not only beauty in women, but also strength, courage, and confidence.