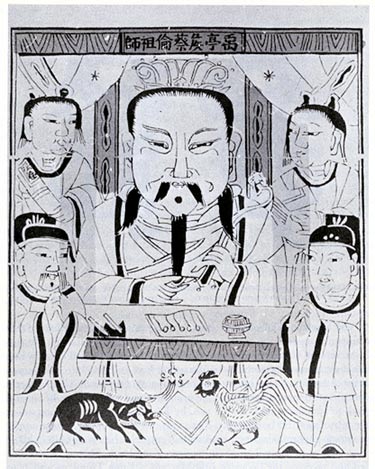 Have you ever looked at that piece of paper sitting in front of you and thought, who invented paper? The answer to that question is the Chinese inventor Cai Lun, also known as T’sai Lun.1

Cai Lun was born to a poor family in Guiyang, China, during the Eastern Han dynasty around 50 AD.2 He was a smart and ambitious man. He became a clerical official in a palace at a young age and was much trusted by the emperor He of Han. Lun was a calm man known for being unwilling to take risks, but he was also unsociable, and slightly strange.3

There is a story told about his journey to discovering paper. It all started one day when he was given a stack of documents to process at home by the emperor since he served as a court eunuch. These documents were carved on bamboo strips, which were given to several men to carry on a bull-drawn cart. On the way, the bull slipped and fell under the wheels halfway through the journey, making the bamboo strips fall to the ground as well. While trying to get another bull to carry the strips, Lun had time to think, and he concluded that the strips were just too heavy and difficult to carry and use. They were indeed a burden to the scholars.4

There must be another way out? So much energy and effort had gone into handling the cumbersome bamboo strips. What about something lighter? With what? Lun had no solution. As he was walking, he passed a hemp stalk, and looked at the hemp fiber and thought, “maybe that could be useful.” He carefully removed one layer after another from its fibers, wondering if they could somehow be written on. But they were just too rough and loose. He then thought of the wool from the remains of silk cocoons that might be useful, and that’s when he had it. He ran around seeking help for his experiment. The servants gathered bark, hemp, old silk cocoons, fishing nets, and cloth. They chopped the ingredients finely before cooking them. The result was then pounded to a starchy mixture and dissolved in water before adding another type of starch. When this new mixture was lifted out of the water, it had separated into many fine layers of fabric. Once dried, they became sheets of paper.

Lun then presented the pieces of paper he had made to the emperor. He was overjoyed, and issued a decree to have the whole country adopt the new writing material.

In 105 CE, Cai invented the composition for paper along with the paper making process. Although the tools and machinery have changed in the making of paper and are more complex today, they still employ the ancient technique of felted sheets of fiber suspended in water, drying the water then drying it into a thin sheet.5 To think that this invention would give him world-recognition, and even in his own time he was given that recognition for his invention. After his discovery, all the scholars were exhilarated and appreciative of his invention. As he had been honored with the title of Marquis of Dragon Pavilion, his invention of paper was then called Marquis Cai Paper.

Cai Lun has ranked as one of the top four Chinese inventors. He had made an important contribution to Chinese civilization of his day. And his contribution continues all over the world to this day, to a point where it is hard to imagine life without paper. The invention of paper clearly affects the world today. Cai Lun took paper beyond being a technical invention; he helped drive its widespread adoption to the point were it became a successful innovation, one that dramatically changed the world, and still continues to be a major societal force.

I am a Marketing major at St. Mary’s University in San Antonio, coming from Austin, Texas. My passion is to help others in need. I love to serve and give back to my community, and to meet new people. I enjoy spending my free time with family and friends and with those that I love.

I never really batted an eye when it came to the origins of paper, I remember learning about the use of clay tablets in school, but for some reason I never really remember learning about paper. I honestly forget how much paper has made an impact on history, what immediately comes to mind is the impact of the printing press (Martin Luther’s 95 theses to be in particular). It is crazy to think that Cai Lun did not realize the importance or potential of his revolutionary invention.

What an interesting article! Cai Lun is ranked as one of the top four Chinese inventors. I would argue, after reading this article, that he was even more important than that. Humans would definitely not be where we are today without paper. The ability to easily create a written record of information literally changed everything. I found the story of how Cai Lun invented paper very interesting.

I am glad Cai Lun came up with the brilliant idea of inventing paper. I honestly cannot imagine life without paper because we use it too often. However, as technology is advancing the usage of paper is trying to be reduced. Although, for the paper to be invented it was a fantastic idea due to it being used for certain purposes. I believe that being able to have paper is valuable and can be transformed into art. This article was very interesting to read.

I never really pondered that one man could have invented a paper. I thought it was just a thing that exists. Cai Lun is definitely deserving of recognition for his invention. Paper is possibly the most widely used material in all of the world, and to think one man created it from a single thought of “What if..”. I also thought paper was just made from wood, but through this article, I learned that paper is a combination of many materials and a large process to make it the way it is.

thanks for the info this is for my 6th grade essay

I have used paper since before going into any grade school. I could not imagine school any other way than using paper to write on. I never even thought about how records were kept before any paper was made, except drawings on walls. It is very interesting the concept of paper was born in China. This invention changed the world at the time.

I think this is a very interesting article. It had never occurred to me to think about how paper was invented or who invented it. This was my first time reading about Cai Lun and the invention of paper. I genuinely think that his invention of paper was genius, Paper is still used today and is something essential for our day to day, people use paper for school, work, homework, and many other things. I believe Cai Lun invention (paper) will still be used for plenty years to come.

Learning something new such as how the paper came to light, is something I’ve wondered about but never got to chance to look up. This article, however, has well explained how Cai Lun, one of the top four Chinese inventors, has given the world something that was much needed, something that is being put to use now and most likely later in the future (paper). Very well-written article, short and sweet.