Gilgamesh: The Search for Immortality 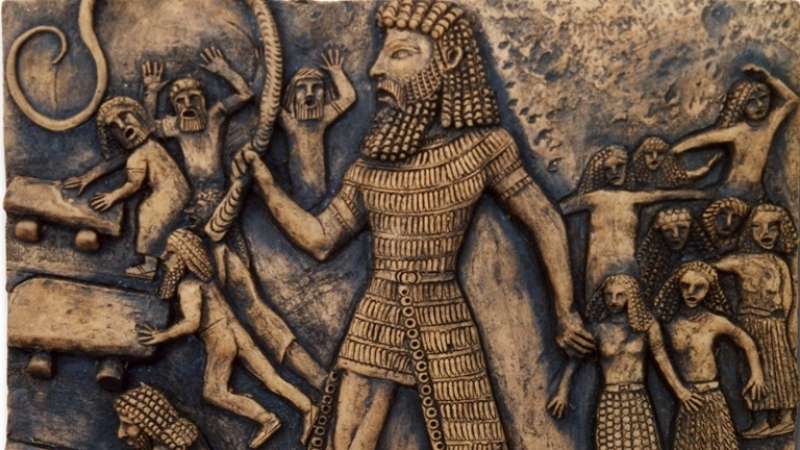 Imagine grasping eternal life in your hands just to watch it disappear before your eyes. Or imagine that the hardest journey of your life is finally over and you have failed to obtain the very thing you wanted most. Our story begins in a land known as Mesopotamia about four thousand years ago. There one of the earliest cities in history existed, called Uruk, which lies on the Euphrates river near the Persian Gulf. This city became famous for being the site of one of the earliest piece of literature ever created, The Epic of Gilgamesh. Although in this story Gilgamesh, the hero, is the king of Uruk, he is also partly a god. He is one part mortal and two parts divine, and as such, he was a being full of beauty and courage, but also as terrifying as a wild bull.1 The Epic of Gilgamesh is an adventure story with many exciting parts. However, one of the central themes of the epic revolves around Gilgamesh’s search for immortality.2

Gilgamesh’s quest for everlasting life begins when his friend Enkidu unexpectedly dies. The trauma from losing his dear friend scares Gilgamesh. Enkidu isn’t just a dear friend to Gilgamesh, Enkidu is like a brother to him. The gods had originally created Enkidu to help stop Gilgamesh from stirring up trouble, but after they met, they got along so well that they became brothers and went on countless journeys together. With Enkidu’s death, Gilgamesh is so terrified by the idea of death that he goes on a long journey to beat the inevitable. On this journey he meets several people who tell him that his journey is pointless and that he won’t find what he is searching for. But Gilgamesh doesn’t listen, and pushes forward regardless of what people say. He is so determined to find Utnapishtim, the only human who had been made immortal, but doing so he ignores what his body really desires, sleep. He completely exhausted himself to the point where he was near dying.

After a long and dangerous journey, Gilgamesh finally meets Utnapishtim, who tells Gilgamesh, “There is no permanence. Do we build a house to stand forever, do we seal a contract to hold for all time?…. When the Anunnaki, the judges, come together, and Mammetun the mother of destinies, together they decree the fates of men. Life and death they allot but the day of death they do not disclose.”3 Even with the wise information that Utnapishtim tells him, Gilgamesh is still in pursuit of immortality, so Utnapishtim decides to put him up to a test. The test requires him to stay awake for six days and seven nights, but Gilgamesh ultimately fails the test. Utnapishtim had a kind heart and told him that, instead of obtaining immortality, he might obtain youthfulness. There was a plant in the sea that can restore one’s youth. So of course Gilgamesh doesn’t hesitate in jumping in to find this plant. He finally gets the key to youthfulness, and decides to rest and relax, because he believes his troubles are over. With his guard down, a snake snatches the plant away from him and the plant is gone forever.

Gilgamesh finally accepts this fate, and goes back to the land of Uruk. Although he never got immortality, he did get what he needed. Throughout the story the same line recurs about what is he suppose to do after Enkidu’s death, which is just to live his normal, mortal life.4 Once he returns, he writes on a wall the story of his long journey for immortality. The world may never know if there was a real living, breathing ruler named Gilgamesh, but at least for now we have a legendary one that will last forever.

I’ve never read this story before, but it sounds interesting! Not everything lasts forever, and that includes life. It’s really sad he lost someone close to him which led him down the path of trying to be immortal, but in the end he had to come to terms with his life after Enkidu’s death. I’d love to read the complete story in my free time!

Such an interesting and informative article! Very captivating. I have previously heard the epic the Gilgamesh however did not know this aspect of the story. The element of immortality has played such a key factor in my stories and it is so very interesting that it has also played a role in Gilgamesh. Great job, I thoroughly enjoyed reading your article.

Interesting story. I have heard references to Gilgamesh but never knew the details surrounding the myth. People have been searching for the key to immortality for thousands and thousands of years. This is just another example in mythology about another failed attempt on achieving immortality. You think that people would learn after the first few tries but no. I find it interesting that Gilgamesh let the flower bestowing youthfulness slip through his grasp. He already let immortality slip through his grasp and now he let youthfulness as well. Maybe if Gilgamesh slept to begin with, he would have never failed the test from Utnapishtim.

I wish I started learning about early epic poems and stories that set the foundation for writing stories even to this day. Schools should have their class read the epic of Gilgamesh in schools, along with stories such as Beowulf and Hamlet. Indeed, an excellent way to talk about a rarely mention part of our species history, that being the being of recorded history. It is funny how Gilgamesh became immortal but not in the way he expected.

An informative article about an epic that I knew little about. The story of The Epic of Gilgamesh is fascinating. It’s interesting to think what our ancestors thought of this epic when it was first created and how they may have been influenced by it. The primary lesson about enjoying life and not worrying too much about death would probably have been helpful for people who believed they were at the mercy of the gods more often than not. Overall an interesting story about a period of time I haven’t really studied.

Alongside Greek mythology, ancient mythology like this has its own mysticism to it. I remember learning about this epic when I was in high school, so this is refreshing to re-read. What I took from this story was that sometimes we get so lost in a beauty that we want to obtain dearly, that we don’t realize it might be tainted and that we might have what we need right in front of us. Enkidu passing was Gilgamesh realizing that maybe his mortal life was fine just the way it was, although he lost his best friend and brother, he gained wisdom to live the rest of his life in peace.

This was such a well-written and informative article! I absolutely love anything written in an epic poem or epic fantasy setting style. I can’t believe I had never heard of Gilgamesh before reading your article. I wish we would include this in our public education along with Beowulf and Shakespeare.

Gilgamesh has always been a fascinating person to read about and how Gilgamesh interacts with his desires and needs. Starting with his good friends death Gilgamesh comes to fear his own death thus prompting him to seek immortality. What Gilgamesh does not know is that he does not need immortality he is in need of something else entirely acceptance of his fate. By failing the test to become immortal and failing to keep the plant he is able to accept that death is inevitable. Perhaps if Gilgamesh did not neglect his human needs such as sleep in pursuit of divine qualities he may have succeeded in obtaining immortality.

Very interesting story but what really stood out how only a human or humans have found eternal life. It makes me realise how amazing and just how incredible JESUS is and was for giving me and every other person that repents and gives there life to CHRIST eternal life we didn’t have to work for it it was just given to us. Thank You JESUS!