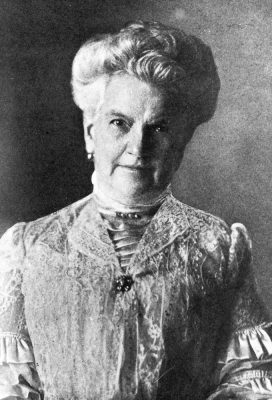 Caroline Earle White grew up in a little town in Pennsylvania where she would walk from her home, into town, and would constantly see horses and mules being overworked and beaten if they slowed down or tried to take breaks. Caroline had a big heart for animals and hated seeing them get abused. She started intentionally picking different walking trails so that she could avoid those streets where she would see this animal cruelty. It constantly broke Caroline’s heart, which led her to stand up for what she believed in.1

Caroline’s husband, Richard White was an attorney, and he encouraged her to have a meeting with the founder of the first American Society for the Prevention of Cruelty to Animals (ASPCA), who was Henry Bergh in 1866. Henry Bergh started this organization because his office window overlooked an area in town where he would always see animals abused. Caroline went to talk to Mr. Bergh, looking for advice on how to begin a chapter for the Society for the Prevention of Cruelty to Animals. Bergh told her that she should start by obtaining a petition and get signatures.2 White returned home with just the spark she needed. Caroline and her husband started obtaining signatures for her petition calling for the Pennsylvania Chapter for Society for the Prevention of Cruelty to Animals (SPCA). While obtaining signatures, Caroline discovered that there were others that were interested in starting a humane society. Caroline and twenty-nine other women joined together to form the PSPCA.3

Caroline was upset that women were not able to sit on the board of the organization started by extraordinary women, so in April of 1869, the Pennsylvania Society for the Prevention of Cruelty to Animals (PSPCA) became known as the Women’s Humane Society, formed by thirty extraordinary women. Funds were raised for the facility to be built in Bensalem, Pennsylvania. It was called the “refuge,” being the first animal shelter in the world.6 The refuge provided free veterinary care and also employed three cruelty officers. These men were authorized to prevent animal abuse and punish those involved.

The Women’s Branch was criticized for focusing on animal advocacy. Caroline White replied to these critics who thought her group should work for human causes saying,

“But are we not working for human beings? Are we not constantly striving to make men and women more humane and disposed to all kindly feelings and to teach children to become gentle and merciful? Is not everything which tends to elevate man in the mortal scale a benefit to him, and is it not rendering him incalculable service to teach him to control his passions, as we do when we prevent him from weakening his anger upon his horses?”7

In 1871, White’s organization passed the twenty-eight-hour law, requiring railroad companies to provide food, water, and rest time for animals in transport after twenty-eight hours. White’s organization had agents access railroads and punish anyone involved with the abuse of the law. Even with this law in place, people still would not listen. In 1896, the Reading Railroad was found guilty of transporting horses for fifty-two hours straight without food or water, and ended up being charged a $200 fee. White viewed the twenty-eight-hour law as the “crowning achievement” of her life.8

Animal advocacy became part of women’s social activism. This ended up leading to The Antivivisection Movement in 1883, with Caroline Earle White as the founder. This movement was formed to end experimentation on animals in research and testing. It was the first non-profit animal organization in the United States.9 Caroline’s progressive thinking were light years ahead of her time. With this being said, the Humane Society was established before child welfare existed. Children were being abandoned all over the United States. It was decided to start the Societies for the Prevention of Cruelty to Children in 1875, once it was seen that there was such a positive change that had been made in the lives of animals. Caroline Earle White had no idea that she could change the lives of everyone by standing up for animals, but she did, and it was the proudest achievement she ever had.10

Society for the Prevention of Cruelty to Animals

This was a very insightful article. It was fascinating to hear that because she was a female she was unable to sit on the board of her own organization. However, despite these set backs it was very impressive to read about all the change she created and especially the establishment of the first humane society. Caroline’s story was very inspiring and overall this was a very well written article.

Hello Kayla, First of all, congratulations on your nomination and getting your article published! This was a very insightful article and is a great example of a woman standing up and fighting for a change. It was fascinating to hear about Caroline Earle, a female who was unable to sit on the board of her own organization. Starting to fight against animal cruelty, and then for Women’s rights, this is a really impressive story of a women who is now an important character of history referring to protests for something that should be right. Overall, incredible article and good luck!

This article was so well written and I think it told the story well of how the humane society had started. I had never learned the origin of the humane society, I had always just known what it stood for. Thank you for writing an article that I think has been overlooked, I am just not sure if it is because of the organization or the gender of the person.

Hi Caroline, I enjoyed reading your article as the topic of animal welfare and testing are still being discussed today. I’m glad Caroline’s husband was supportive of her and took her seriously. I’m sure that it was uncommon for men at the time to believe in their wife’s abilities outside the home. I liked the quote you included about Caroline’s response to her critics. I think it really rings true. You can often tell a lot about a person based on how they treat animals.

The author chose a great topic to write on, as many people can relate to the feelings and situations Caroline Earle had felt. Not many people know the history of her organization and how the humane society had started, it is very nice to see an article touch on the topic of animal cruelty as many not many articles are written on this topic.

Caroline White is an inspiration; animal concerns are frequently disregarded and ignored. I don’t see how someone could be fine with injuring or overworking an animal, yet this is still a major issue today. It’s comforting to know that there are individuals striving to put an end to this brutality, and that change is possible. It was palpable for Caroline, so why shouldn’t it be so for us? Congratulations on your nomination and a fantastic read!

Hi Kayla, this is a very good article. I really knew nothing about Caroline Earle White before reading it, but I really learned a lot from it. I think many people that read your article will relate to the feelings and situations Caroline Earle White had to go through. Also, you used really good images that helped me while reading through your work and sources that made it trustworthy. Good job.

This was an extremely well-written article, and it was so detailed. It was so interesting because I do not have much knowledge of the story of Caroline Earle White and her fight against animal abuse. This article was so inspiring and thought-provoking that one woman stood up for his beliefs in a time when women were not allowed to be in positions of power regardless of them trying to help the world. The author truly shows that standing up for what you believe matters. It is amazing that Caroline helped created the first animal shelter.

This article made me so sad because of the nature of the topic, but it also made me hopeful for future provisions to protect vulnerable populations.

I relate a lot to this article because I don’t support the abuse of animals either. I’m glad that she voiced her opinions as animal abuse is very common nowadays and people treat them as if the don’t feel. It’s so sad! This article is so well written into the details about how involved she got politically. Good put together article!