Edmund Hillary and Tenzing Norgay: Who Dares to Follow Their Icy Steps? 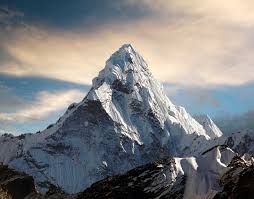 It was the year 1953, in the month of May. Two men stared at the perilous journey ahead that few men dared to travel. They were willing to rest the fate of their lives in the frozen hands of Mother Earth. Would you have the nerves of steel that Edmund Hillary and Tenzing Norgay had as they faced the spine-chilling Mount Everest?

These two men, however, were not the first to attempt the climb. The first attempt to summit Mount Everest was in 1921 by George Leigh Mallory and his team of climbers.1 They had not been able to complete their ascent due to an unforgiving storm. With the determination to reach the summit, where no man had ever stood before, Mallory made a second attempt a year later in 1922. This time, Mallory and his team were able to trek more than 27,000 feet up the behemoth of a mountain! On this climb, several of the Sherpa, people who live on the borders of Nepal and Tibet that are well known for their astounding capabilities in mountaineering, on his team were killed by an avalanche. This was still not enough to satisfy Mallory’s thirst for adventure! Third times the charm, right? Maybe? No? Mallory made his third and final attempt to conquer one of the seven natural wonders of the world in 1924. Except, this time he and his partner, Andrew Irvine, threw all caution out the window and set their minds to reach the top no matter what troubles they faced. To this day, no one knows if they reached the top. After they departed on their trek… they were never seen again.2

Now let’s shift the focus to New Zealand… Auckland, New Zealand to be exact. This is where the soon famous Edmund Hillary resided, passing through life as a beekeeper by day and a mountain climber by night. By the time he attempted the climb of Mount Everest in 1953, he was at the age of thirty-four years, and luckily he had the assistance and camaraderie of a skilled Sherpa, Tenzing Norgay, who was thirty-nine years old.3 Thanks to the thirty years that had passed since Mallory’s attempt, Hillary and Norgay had more advanced climbing equipment than Mallory had, such as more advanced oxygen equipment, a form of portable communication through radio, and clothing that would better suit the environment.4 Although this equipment was not the only things they had that Mallory didn’t. The two had something that is the difference between life and death… a greater sense of caution.

The two departed to accomplish their goal on the 28th of May and managed to climb an astonishing 27,900 feet. Now you’re probably thinking, “Oh, 27,900 feet? Yeah, that’s a little challenging, but I could probably do that.” Sorry to break it to you, but these were no ordinary 27,900 feet. Along the way, Hillary and Norgay faced blinding blizzards, the risk of avalanches, or the risk of falling into an icy abyss, as well as running out of oxygen.5 Another risk that is faced when mountain climbing is altitude sickness. This is what happens when one ascends or descends in altitude too quickly without allowing one’s body to adjust to the different pressures and altitude. It can be life threatening if it is not treated or prevented.

After a long, freezing, and brutal night, the two were able to reach the top of the world at 11:30 a.m on May 29, 1953. This also happened to be the birthday of Tenzing Norgay! Prior to reaching the summit, Hillary climbed his way up a forty-foot rocky ledge and pulled Norgay up by rope. This ledge came to be known as the Hillary Step.

Word spread that the two accomplished the unimaginable! News of this accomplishment even got to Queen Elizabeth II just two days later on June 1.6 In commemoration of this accomplishment, Hillary was knighted by the Queen, but since Norgay was not a citizen of London he received a British Empire Medal. This concludes the immense journey that was traveled by our two unwavering men.

I think Mt. Everest is so cool and interesting to think about. I can’t imagine just waking up one morning and telling yourself ‘I’m going to climb the tallest mountain in the world!’ Those men definitely had their work put out for them from the start, but they did it! It’s such a dangerous climb and the statistics of deaths reported from people attempting to do it is crazy. I really enjoyed reading this article, I had my eyes glued and couldn’t wait to see what else would be said!

I did not know about Edmund Hillary or Tenzing Norgay and their accomplishment before reading your article but I’m glad I learned something new. I admire the determination and courage of these two men to reach the summit of Mount Everest. I’m afraid of heights so thinking about climbing all the way up a mountain especially Mount Everest just sounds terrifying. I think it’s cool that they got not only recognition for their accomplishment but that Hillary got knighted by Queen Elizabeth and Norgay received a British Empire Medal.

I enjoy hiking and being outdoors but Mount Everest would definitely be a challenge for the average human. These two skillful adults must’ve have some training and preparation before their trek up the icy mountain. It’s a great story to tell but also could’ve been one to never hear about. I’m sure with the advancement of technology and equipment climbing the mountain is becoming easier? I’m not sure if that’s the case but overall great job to these two men on accomplishing their goal.

I had never been hiking before but to hear that two men went as far as hiking Mount Everest is mind blowing to me. The amount of training, skill, and preparation put towards hiking Mount Everest must have been tremendous. With the enhancement of technology and stronger people in modern times, the fact that Edmund Hillary and Tenzing Norgay had done this before the 2000’s makes the accomplishment more amazing.

Climbing a mountain is a milestone and it is a task that very few people have done, and for these two men to climb Mount Everst, just blows my mind, it must have taken weeks and lots of prepping to partake in this journey. This story was very interesting because the task was so large but it was accomplished

I have read books about climbing Mt. Everest, and it is a near impossible feat. Between the risk of frostbite and the lack of oxygen the higher up the mountain you go, death is a very real possibility, and it is actually a reality for some people who make the attempt. Although many have reached the summit since Edmund Hillary and Tenzing Norgay, it is still an incredible and admirable achievement, and I bet the moment was made a little bit sweeter by the fact that it was Tenzing Norgay’s birthday. That must’ve been an unforgettable birthday present!

To answer the author’s question, no, I would not have the nerves of steel that Edmund Hillary and Tenzing Norgay had. For the very reason Mallory and his team did not make it, is why I would not want to attempt the climb. It’s inspirational to read about Hillary’s and Tenzing’s success though. Another historical event going unnoticed, great job.

The article had a good story arc and is based on a that’s really good for a story. Only problem is, the author was a little all over the place. I understand that the repeated interjections in the article may just be a mark of the author’s personality at work, but it is problematic. The author is trying to make the subject lighter by giving unnecessary pauses and actively questioning how many attempts this feat must take. However, this only takes away from the seriousness of the subject. People were dying in the attempt to climb this mountain, so we must respect them for their losses.

This was a great article. Thank You so much. Mount Everest Is huge. I have heard that there are many many people who never make it to the top or even die on the journey. I admire the determination and courage of these two men to wake up one morning and say I am going to climb to the top of Mount Everest. There was a lot of training and preparation that went into this. I think it’s cool that they got not only recognition for their accomplishment but that Hillary got knighted by Queen Elizabeth and Norgay received a British Empire Medal.

Given how many people die in this day and age attempting to climb Mount Everest, it is incredible that Edmund Hillary and Tenzing Norgay would have been brave enough to do it in 1953! I can’t imagine how much hardship they went through to finally reach the summit. It is a good thing that Hilary and Norgay had developed a greater sense of caution than George Mallory, otherwise they might have met with the same fate as his expeditions.