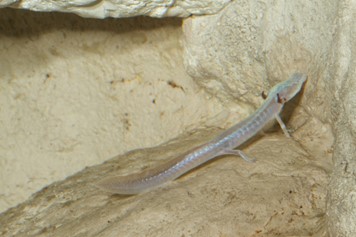 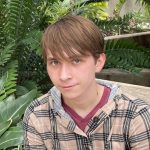 When one thinks of an oasis, what typically comes to mind is an above-ground watering hole teeming with life and natural resources that can support a vast ecosystem, juxtaposed against a barren landscape devoid of that which all living things need to survive – water. While critics of San Antonio may call it a desert, the city’s most important oasis lies not on its barren earth, but deep below in the porous limestone of the Edward’s Aquifer, which many different uniquely adapted species call home. One such species is the endangered 1 Texas Blind Salamander, which despite it’s small size and dwindling population, succeeded in making major waves that still presently impact how the city manages its water .

Like many species residing in the Edward’s Aquifer, the Blind Salamander has adapted to become attuned to the darkness and pressure it is surrounded by in the underground environment, getting such a unique name from the amphibian’s lack of eyes substituted for two iconic dark spots on the head 3. While not necessarily overhunted or preyed on, the salamanders are instead endangered because there is only one place on Earth in which they are attuned to live: the depths of the Edward’s Aquifer. The aquifer’s balance is sensitive, and its systems are incredibly fine-tuned, so if any conditions were to change from loss of water or significant changes in other environmental factors, the specifically adapted species within its depths wouldn’t stand a chance. Maintaining these conditions is crucial in ensuring the survival of these unique native species, so it would only seem natural that there would be measures in place to protect this habitat. Specifically, factors that could reduce the amount of water available in in the aquifer could further endanger these species, and efforts have focused on the threats of overconsumption of water by humans. Most life in Texas – both human and animal – relies on the same water that the Edward’s supplies, so any overuse draws valuable water from the pool that the rest of the populations require as well. Before 1995, however, there were few effective protocols in place aimed at conserving this resource that so many depended on, and it didn’t take long for this to be felt by both the salamanders and residents. The Edward’s Aquifer is a truly massive underground aquifer made up of porous limestone rock that is specialized to hold and store as much water as possible, creating a system that preserves water in mass quantities across the Midwest. The Aquifer’s full extent reaches from west Texas all the way to Arkansas, all of it providing vital resources to communities and ecosystems along the way. For decades, the attitude towards the system was one of appreciation but indifference, as residents and businesses alike ramped up pumping though it was an endless resource. The San Antonio Water System identified the biggest potential ways people can waste water as “landscape watering” and “allowing (excess) water from any source to run off” 5, both which were easy mistakes to make for San Antonio residents, and at the time were not being actively regulated. When it came to water regulation politics, the situation could best be summed up by a popular saying at the time: “Whiskey is for drinking, water is for fighting” 6. As the resource was not yet understood well enough (the species within even less so), it was a touchy subject for lawmakers and difficult for any progress to be made in pushing regulations through with the constant disputes concerning the topic, especially with the thought of how the public would react to having their water usage policed. At that time, the San Antonio Water Board was the city’s main water utility, and the Edward’s Underground Water District was in charge of protecting and conserving the aquifer, but neither of them were granted the necessary regulatory authority to enforce meaningful policies to protect the resource. This meant they had no real power to stop residents and businesses from using so much water, and since the importance of water conservation was not as well understood or emphasized by research, there was no sense of urgency with respect to prioritizing water conservation policies. This inaction spelled dire consequences for the humble salamanders and other species residing in the depths, as pumping and political gridlock around the situation only led to more water from the aquifer being lost, bringing fear to many and potential degrading critical habitat. Thankfully, one organization heard the cries of the salamanders and stepped forward on their behalf: the Sierra Club. As an organization steeped in the protection of species and natural resources, they were greatly concerned by the lack of regulation around aquifer pumping. In 1991, the Sierra Club took the most drastic course of action they could, filing a lawsuit against the U.S. Fish and Wildlife Service for their negligence in upholding the Endangered Species Act, citing that the Blind Salamanders were native only to the aquifer and were already endangered 8. As of 1973, the Endangered Species Act established the first precedents for resource protection and encouraged state programs to maintain crucial areas such as the Edward’s Aquifer, thus the responsibility would likely fall on the state of Texas to take action. The Club’s goal in filing a lawsuit was to draw attention towards the declining aquifer levels, and bring about stricter pumping regulations to support flows in Comal and San Marcos Springs, both of which are fed by the Edward’s Aquifer.

In 1993, the collective prayers of the Sierra Club were answered, and the U.S. District Court ruled in favor of the lawsuit, announcing that the Texas Water Commission had to develop more effective pumping regulations to maintain spring flow.  In response to this, the Texas Senate established the Edward’s Aquifer Authority (EAA) in 1993, abolishing the Edward’s Underground Water District and overhauling the previous Water Boards to create the current San Antonio Water System, both with the new goal of recognizing aquifer conservation as a priority. Three years later in 1996, the EAA became fully operational and is able to begin rolling out new protocols and regulations aimed at minimizing pumping through fines and preservation of recharge zones 9. The new precedents include increased monitoring of water usage by citizens and businesses, placing limits on the amount of water that can be pumped to customers of the Edward’s Aquifer Authority in times of drought, and established the protection of recharge zone areas that are were previously at risk of destruction. Aquifer levels would be monitored through the established J-17 index well at Fort Sam Houston, but now drought restrictions would be put into place based on decreasing water level readings. These systems are still in place today, and have targeted the most immediate threats to water conservation and sustainability in the face of expanding urbanization.

For the humble salamanders, these regulations have staved off extinction and protected valuable recharge zones essential to the stability of their habitat. Although they are still currently endangered, the EAA protections are currently helping the ecosystems of the aquifer continue to thrive, and are ensuring that the residents who rely on this resource will have enough for the future 10. In 2021, a study by the University of Texas at San Antonio sought to evaluate the success of these conservation regulations in protecting recharge zones, using urbanization rates as the measurable variable representing human consumption. The study measured development rates from three periods: 2001–2006, 2006–2011, and 2011–2016. Researchers found that the rate of urbanization decreased during all three time periods, perhaps indicating a new era of aquifer protection as a result of increased recharge zone regulation by the EAA 11. Through no actions aside from their mere existence, these little known organisms were able to accomplish more in the way of establishing precedents for aquifer conservation in five years than resulted during previous decades of aquifer use. Surprisingly, San Antonio’s continued access to water from the Edwards Aquifer San Antonio has the Blind Texas Salamander to thank.

My name is Byron Cox and I am an environmental science major from the city of Helotes, Texas. I’m currently a junior with a set graduation date of May 2023 and a desire to aid in city-wide conservation efforts. I often spend my time being with friends or doing volunteer work, though the best times are when I’m doing both! My goal is to do the most I can for the conservation field, and I look forward to a career someday doing just that.

This was a very interesting article to read, I did not even know of the Texas Blind Salamander’s existence. It is incredible how the protection of one little creature could help set a precedent for how an entire aquifer is being conserved. I am very happy that the Sierra Club recognized the importance of the Edward’s regulation and decided to hold federal organizations accountable while also protecting the habitat of many other species. Good work, Byron!

You would never think that such a small creature could have a huge impact on our aquifer’s ecosystem. It’s incredible that this salamander isn’t talked about more or recognized for its role in the environment. I’m glad that the aquifer is prospering because of the protection of one endangered salamander that the Sierra Club decided to defend. Without them, The Texas Blind Salamander may not have been around for future generations to appreciate. Great article, I really enjoyed reading!

I had never heard of the Texas Blind Salamander before reading your article. Based on the animal’s anatomy, I cannot imagine having dots for eyes and being unable to see. I am surprised I have not heard about this situation before the article as it seems like if the Sierra Club did not defend the salamander the aquifer would not be as useful as it is now.