Harriet Tubman: Her Journey to Freedom 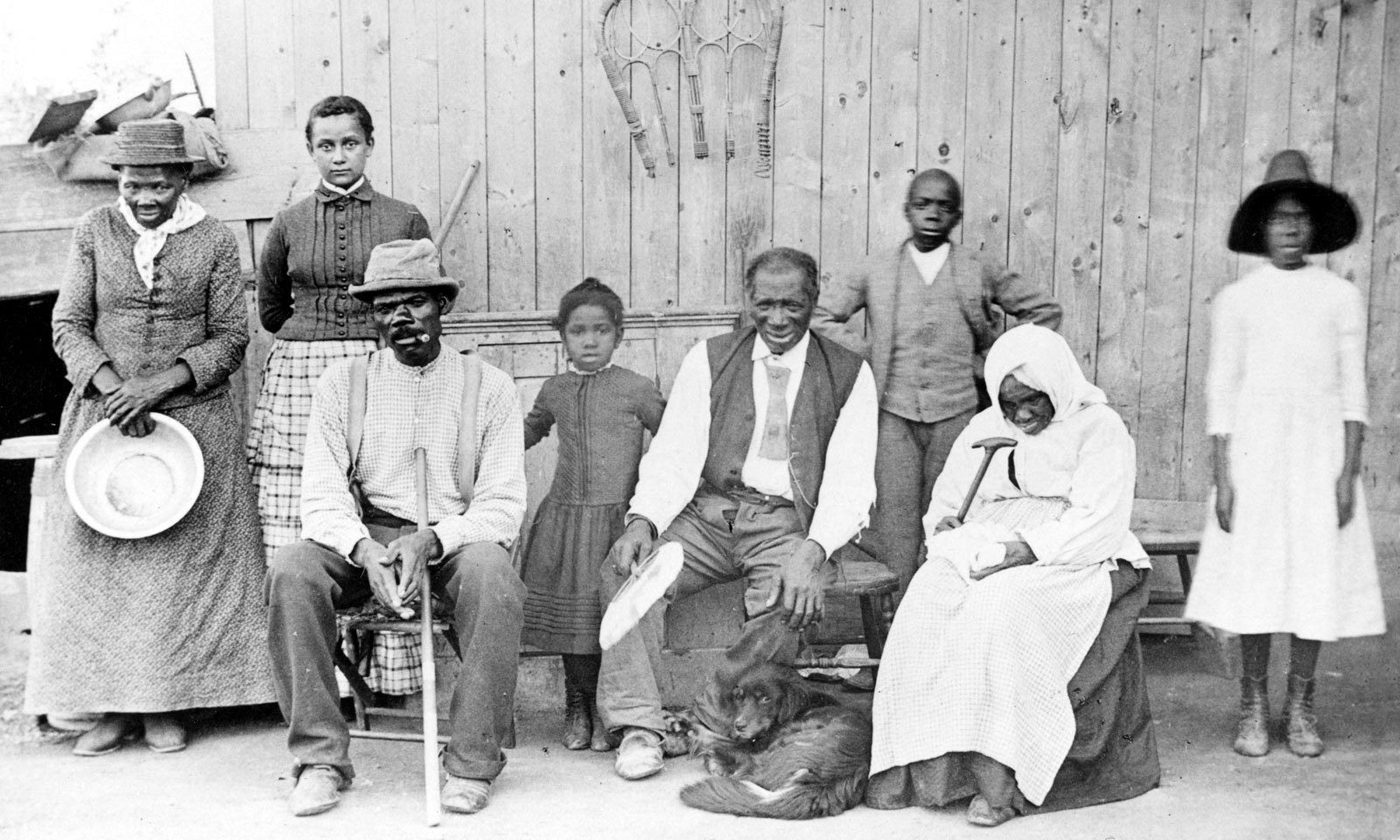 It was night, and Harriet Tubman and her brothers began their journey to freedom. But when she looked back, she saw that her brothers were not following behind her. They were frozen in fear, thinking about the fact that they could get caught and face awful consequences. With their fear increasing, they said their goodbyes and headed back to their owners’ house.1 Saddened and alone, Harriet began walking north; nothing was going to stop her from getting what she always wanted, and that was her freedom.

One day, around the age twelve, Harriet Tubman’s owner threw a heavy weight at her after a fit of rage came over him. This fractured her skull, which applied pressure to her brain, and it made her have disabilities while growing up. This wasn’t the only pain Tubman had throughout her childhood. She also saw her sister being sold and taken away from them. Afterward, her parents were saddened and asked themselves why life was the way it was for them.2 Harriet Tubman didn’t know it then, but the struggles she faced when she was a child were only preparing her for the greater things she was going to achieve much later.

By the time Harriet Tubman had grown older and wedded, not many changes had been made in regards to the treatment of African-American slaves. In the 1840s, Tubman, along with her husband, John Tubman, a free man, worked with her brothers as cotton field slaves. During this period, it had become known to her that their master had made plans to sell her and her brothers, leading the family to be separated once again. If the idea of being separated from her family had not been fearful enough for Tubman, the unspoken horrors of being sent further South added to the horror of being torn away from what she already knew.3

Within her, the desire to be free became stronger and stronger. It had grown so much within her that she spoke to her husband John about it, to which he responded that he would tell her master if she ever attempted to run away. John being a free man held a certain power over his wife that she was not capable of fighting. Since her husband had made his opinion known to her what he would do if she were to try and escape, their last known moments together were filled with tension, and Harriet was on edge constantly.4 However, even with the threats coming from John, this did not fully keep Harriet from planning her escape; it had just delayed it. More than ever, she was determined to become free and leave her condition of dependence on not only her master, but also on her husband. She was very careful in discussing her plans to run away and when she would do it.5

On the night of her escape, she gathered her brothers and began singing a song to the other slaves, telling them that they were leaving. She led the way north, but when she turned around, she saw that her brothers were not following. They were afraid that they would get caught and face horrible consequences. They said their goodbyes to their sister and headed back to their master’s house. Even though Harriet was now alone, and much more vulnerable than before, she headed North towards her freedom.6 Tubman would travel during the night, because it made it harder for people to see her, and she would hide out during the day with people she could trust. After long days of traveling, she finally reached a Northern state, where she could be a free woman.

Yet even gaining her freedom, she could not stop thinking about her brothers and how they were still living as slaves. She decided to create a plan to go back and rescue her brothers. She knew that it would be extremely dangerous to return to the southern states because of the Fugitive Slave Act, which stated that it made it illegal for slaves to escape and illegal for anyone to help them. It also made it easier for slave owner to reclaim their slaves after they escaped.7

With the help of the Quakers, she was able to help her brothers and niece to escape.8 She did not want to stop there, so she returned to the South nineteen more times to help rescue more people. They called it the Underground Railroad, which is what Harriet Tubman is famously known for. The courage she showed, to be able to escape and then go back to help others also escape, has been greatly valued ever since. She helped others find the courage within them to fight for the abolition of slavery.

Like many other people, I had some insight as to who Harriet Tubman was and the Underground Railroad and ultimately how revolutionary it was for slaves. With this article however I was able to find out much more information such as, she had her skull fractured at the age of 12 which led to some disabilities, her husband was a free man and ultimately the power that Harriet Tubman to risk her life for the better of the other African-Americans in that area. Harriet Tubman will always be a revolutionary figure in the African-American community thanks to her strength and perseverance that she carried along her journey.

I enjoyed this article and the main idea of the project. The article contains very detailed events in Tubman’s life that allowed her to help many slaves escape horrible conditions. The details that were incorporated in the article allowed me to understand the amount of turmoil that she had to endure for the battle of freedom. She was a symbol of freedom for many people who would have thought that they would never experience freedom. Although her life was tremendously difficult, it was very interesting to learn about how she utilized her personal obstacles to free others.

Harriet Tubman not only escaped, but set an example for humanity and the importance of not only one’s freedom, but everyone else’s freedom. I know I would not be able to go back and endanger my freedom to help others escape, and for this reason she is deserving of her recognition and praise.

Harriet Tubman wan an incredible courageous woman. She risked her own life to help others escape the horrible conditions and torture of slavery. Before reading this article, I was never aware that she was married to a free man and that she wasn’t even able to trust him. It surprises me that she trusted her own husband with her secret of wanting to escape and her own husband told her that he would tell her owner. It saddens be that slavery was a part of our history and is still a part of our present.

Harriet Tubman was a powerful woman that will be remembered for her courage. Harriet Tubman endured some very poor conditions while living in slavery. Harriet strongly desired freedom from this awful lifestyle. It is crazy to think that Harriet Tubman was married to a free man. Tubman risked her life for her freedom which was all that she could ask for. Tubman was a very important historical figure. This article did a great job of showcasing the history of slavery amd the impact Harriet Tubman had on society during this time period.

This is a very interesting article about one of the first influential women in America! I remember Harriet Tubman from my school in elementary school and I think there was another incident about a bus? Yea but she was pretty influential because not many people understood that they were just like any other human beings and that hurt and constructed the majority of our social views today. This was an amazing article, and well written!!

I have heard of the Underground Railroad but the way you tell Harriet Tubman’s story makes it more intriguing to how she got to where she did. Such tragedies she had to live through as a slave and I can’t imagine the pain her family must’ve felt being separated from each other. I think it was brave of her to go back and rescue her brothers and other slaves who needed to be free. I didn’t know that the quakers helped Harriet with helping slaves escape makes me believe that someone had the right mindset about slavery being a cruel and unjust thing at the time.

Harriet Tubman is a strong, dedicated, and influential figure. The fact that she began her journey alone is admirable. As I read the article, I found it interesting that she did not have support from her husband, who said he would tell her master if she ever tried running away and that her brothers were too afraid to continue to journey. It is inspiring to know that Tubman developed the Underground Railroad and was so willing to help others escape the miseries of slavery. Great article!

Hearing a but more insight into her story made me realize just how much harder it must have been for her to not have support from anybody. She was her own strength and it is heart wrenching that even the closest people to her tried to keep her from escaping. The fear that was embedded into the minds of slaves at the time of course affected her deeply but she grew tired of being at the mercy of someone else. To think she made her journey not once, but nineteen more times is incredible! I did not know about the Quakers assisting her on the journey and would have wished to know more about that but all in all great article!

In all honesty, the name of Harriet Tubman is familiar but i did not know anything about her or her relationships with her family in detail till the article. Her bravery and strength to get to freedom but even more amazing is that she went back to save others. It was such a dark time in U.S. history, and Harriet Tubman tried to make the world a better place.