Protection for Our Children: The Mary Ellen Wilson Case 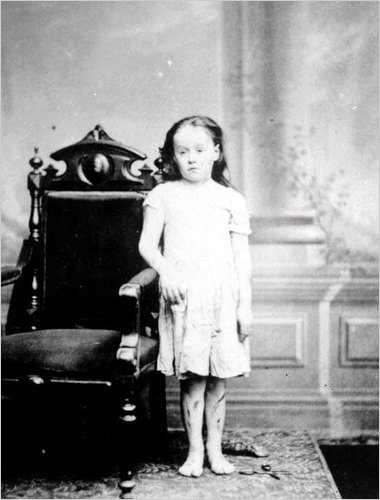 “The frail child in the tattered dress stands next to a large carved wooden chair, her hand resting on the arm for support. A large gash runs from her forehead to her cheek; her arms and legs are evidence of repeated and severe abuse.”1 It’s easy to assume that this came straight from the script of a horror movie, but it was the harsh reality for young Mary Ellen Wilson, a nine year old girl who was so beaten up and malnourished that she only looked about half her age. Although the worst part about it was that her guardian, the person that was expected to provide love and care, was the perpetrator of this little girl’s tortured condition, and law enforcement was only able to help with one hand tied behind its back. Help for children like Mary Ellen was hard to come by because, in the year 1874, parents could raise and discipline their children as they pleased. Parents of the time lived with the mindset that the government had no right to interfere with their parenting, but the Mary Ellen Wilson case opened the eyes of many, including Henry Burgh, who initiated a change and put together a team to end the violence.2

Before 1874, no one had actually ever seen young Mary Ellen. She lived in isolation for at least six out of the nine years of her lifetime. Luckily, her suffering was brought to light when neighbors reported the crying of a child without ever actually seeing the child. Due to the lack of child protection laws, there was not much officials could do about the situation. But once missionary Etta Wheeler caught wind of what was going on, she was determined to rescue Mary Ellen. Etta Wheeler is often overlooked when the Mary Ellen Wilson story is told, but without her kind efforts, Mary Ellen may have never gotten the help she needed.3

Wheeler paid many visits to Mary Ellen’s home, most of which were unsuccessful. and she was only able to catch short glimpses of the battered child. She then requested help from local organizations and charities that were known for providing essentials for children in need, but they did not possess the authority to intervene. Finally, Wheeler turned to someone who was known to take action for causes that he believed in, Henry Burgh.4

Henry Burgh was a rich, well-known diplomat famous for being the founder of the American Society for the Prevention of Cruelty to Animals and for getting overwhelmingly involving in things that he believed in. After working with Wheeler to learn more about Mary Ellen’s situation, he reached out to attorney Elbridge T. Gerry. Gerry was eager to get the ball rolling as well, and within 48 hours, Gerry and Burgh had developed a case and asked Wheeler to testify.5 In attempts to gather more information of his own, Burgh sent investigators to Mary Ellen’s home. After seeing the horrific conditions that Mary Ellen was in, law enforcement soon made the decision to remove the young girl from the dangerous home. Although there were no specific laws concerning child abuse, these circumstances were so special and concerning that an executive decision was made. They took the young, battered girl out of her death trap of a home and comforted her in a blanket. She was so oblivious to the outside world that when a police officer gave her a peppermint stick for comfort, she tried to use it for self defense.6

It was now time for Mary Ellen’s case to go to court, and who better to tell the Mary Ellen story than Mary Ellen herself? She was able to testify for herself in cour,t and gave the real and terribly sad testimony that follows: “My name is Mary Ellen…I have no recollection of ever having been kissed and I have never been kissed by momma. I have never been taken on mommas lap…I never dared speak to anybody, because if I did I would get whipped; I have never had any more clothing than I have on at present…;I have seen stockings and other clothes in our room, but I am not allowed to put them on; whenever momma went out, I was locked up in the bed- room;…I don’t know for what I was whipped; momma never said anything when she whipped me; I do not want to go back to live with momma because she beats me so.”7

After a legal battle, Mary Ellen was permanently removed from her home and given her justice, but this was not enough for Henry Burgh. Burgh was determined to create an organization to protect future children from that kind of abuse. He quickly founded The New York Society for the Prevention of Cruelty to Children (NYSPCC). NYSPCC was the first child protective organization in the entire world. It has since influenced over 300 different organizations and eventually it led to the development of Child Protective Services.8