“He Gave His Life for Me. I Will Give My Life to Him:” A Look into the Faith of Columbine’s First Victim 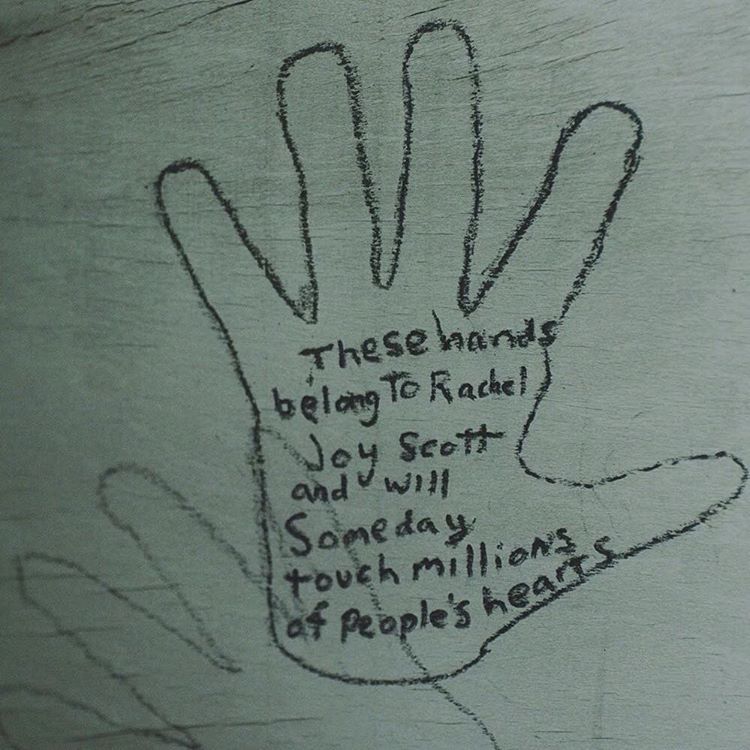 On April 20, 1999, seventeen-year-old Rachel Joy Scott spent the first two classes of the day drawing in her journal; it would be for the last time. Just before she left to go to lunch, Scott showed her sketch to her acting teacher, Sue Caruthers. “Well…It’s not finished. But I was inspired to draw this,” she recalls Rachel saying.1 The drawing on the final page of Rachel’s journal showed her eyes crying thirteen clear tears before becoming darker droplets, watering a rose.2 Her drawing subsequently spread nationwide in the days and weeks after the Columbine shooting had confirmed thirteen victims. But this had not been Rachel Scott’s first such premonition. Rachel had a history of prophetic writings in the years before the Columbine tragedy–beginning when she first gave her life to Christ.

Rachel’s journey with God began on March 5, 1993 when she visited her aunt and uncle, and attended church with them in Shreveport, Louisiana. As the service continued with the crowd praying, dancing, and calling out “Amens” and “Hallelujahs,” twelve-year-old Rachel stood up from her seat and walked to the front of the church, praying. “There was no fuss or fanfare,” Rachel’s Aunt LaBrilla explains. “Rachel quietly walked down front and within moments had her hands raised and very sweetly started praying in the Spirit.”3 Rachel’s new mindset after bringing Christ into her life was further expressed in one of Rachel’s first poems about God: “As I was weeping and crying…I heard the Lord’s voice…He said there would be no more sins, no more lies, Only peace and happiness, In all of my cries.”4

As Rachel grew older, her passion for Christ evolved. She believed that simply knowing God was not the same as having a relationship with Him. So, Rachel set out to speak and live the word of the Lord day after day, no matter where she was. “I Am A Warrior For Christ,” she wrote.5 Rachel Scott also promoted the idea of committing random acts of kindness throughout her high school, believing it would cause a chain reaction of the same. She led by example and befriended those who were alone or withdrawn from the crowd, and began making journals with her small group of friends in order to provide a safe space for ideas and feelings to roam freely without fear of judgement.6

Although Rachel’s faith shimmered throughout her school, her path with Christ was not always smooth. As she attempted to fully accept God into her life, Rachel dealt with her own demons as her parents’ divorce took a toll on her. “I am so pathetic,” Rachel writes in a journal she shared with a friend. “I think that everything is all good, but…I’m just telling myself that so that maybe someday I will truly believe it.”7 She also found herself longing to be a part of a clique at school, so badly in fact, that Rachel began smoking–something she alluded to briefly in one of her journals: “The traces of smoke the cigarette leaves, is a soft string of silk.”8 Despite her efforts, Rachel could never settle into a group of friends that fulfilled her desired level of popularity, and she felt her lack of popularity was due to the lack of her outer beauty. She became envious of other girls in her school for having the looks and friends she desperately wanted.9

This pain and isolation Rachel felt proved also to affect her relationship with God. “Why do I feel dry in your spirit?” she questioned. “Why do I have to feel moments of doubt, distrust, disbelief, stages of anger, [and] stages of loneliness when it comes to you, Father? Each day, I play the question, ‘Do you exist…'”10

As Rachel experienced this inner turmoil, she felt now, more than ever that she must give her faith back to the Lord. Her questions became prayers, and instead of blaming God, Rachel thanked Him and apologized for ever doubting His master plan. “Dear God,” she begins, “I ask for your help in this household. I ask you replace the hate, with your love.”11 “Father, I’m sorry I ever doubted you. You know what you’re doing and you know what’s best for me.” Rachel also made a vow to God, one that would shape the rest of her life–“[From] now on, I put all faith and trust in you. In Jesus Name, Amen.”12

While Rachel continued to regain the faith she needed to better her life, she noticed that the “friends” she once had no longer wanted to associate with the “Jesus Freak.” In a journal to Sam–a friend of Rachel’s–Rachel states, “I [have] lost all of my friends at school. Now that I have begun to walk my talk, they make fun of me.” Despite the similar loneliness Rachel felt for the second time while in high school, her attitude towards this new wave of  distress was handled differently, now that she had the Lord on her side. Rachel continues with:

“But you know what…it’s all worth it to me. I am not going to apologize for speaking the Name of Jesus…I am not going to hide the light that God put in me. If I have to sacrifice everything…I will. I will take it.“13

The excerpt above was written by Rachel on April 20, 1998–exactly one year before the Columbine Massacre. Rachel Joy Scott, one year before her death, was willing to “sacrifice everything” for her Lord. Whether it was pure coincidence or not, Rachel’s next journal on May 2 of 1998 showcased Rachel’s prophecy of the life God planned for her. Rachel’s May 2 journal entry began with a three sentence introduction that would shock, not only her family, but everyone who heard her story after the Columbine Massacre:

“This will be my last year Lord. I have gotten what I can. Thank you.“14

Rachel continues these prophetic writings in a poem written just weeks before her death:

“It isn’t suicide. I consider it homicide. The world you [God] have created has led to my death.“15

Friends and family of Rachel Scott had no idea she wrote these journals until after her death. However, Rachel did not keep it secret that her life would be cut short. “She was so, so blunt. She’d say ‘I’m going to die young’… or ‘I am not gonna make it that far’,” Rachel’s friend, Nick recalled. “We’d get upset with her…a lot of people would say ‘Stop saying that…It’s a downer’ and that was her thing. She would say ‘It’s not a downer…I don’t have a problem with it.'”16

On April 20, 1999, the first shots rang out at Columbine High School as Eric Harris and Dylan Klebold open fired on Rachel Scott and Richard Castaldo, who were having lunch outside. Two bullets tore through Castaldo’s spine, permanently paralyzing him, while three bullets hit Rachel in the chest, arm, and thigh.17 Both laid weak and wounded on the ground, but they were still alive. Castaldo recalls hearing noises he could not particularly make out, but did hear Rachel softly crying.18

Despite the highly publicized story of Rachel’s martyrdom as she said “Yes” or “You know I do” to the killers’ question “Do you still believe in God?,” Richard Castaldo and his mother, Connie Michalik have changed this story multiple times. In an interview in the Spring of 2000, Castaldo’s mother confirmed that Richard had no memory of Rachel’s answer to her killers’ taunts before hearing the final gunshot. However, on June 26, 2001, Michalik announced that Richard had heard Scott say “Yes” in response to the gunmen’s questions. Furthermore, Richard Castaldo has openly expressed frustration about his incapability to recall what happened before Rachel’s death. On the first anniversary of the Columbine massacre, Castaldo stated, “People tell me I said she said she believed in God, and I can’t remember it.”19

Regardless which narrative of Rachel’s final moments actually took place, the end of Rachel’s life does not discredit the daily steps she took to show her love and passion for God. Through her parent’s divorce, the bullying she encountered at school, and the temptation to continue smoking, Rachel sought God and followed him to the very end.