The Spoils of War: Stolen Art in WWII 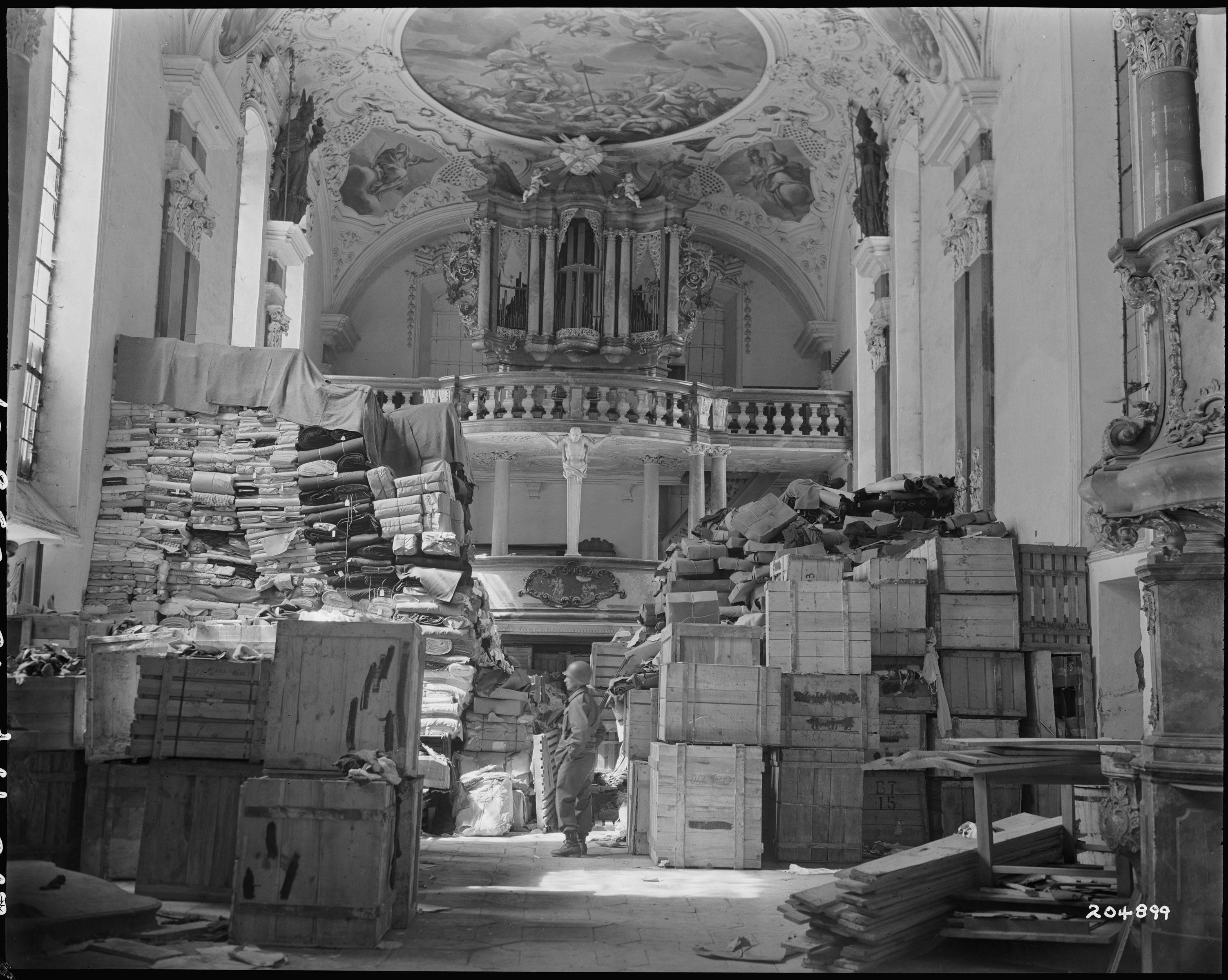 Article with the Best Use of Images

Best Article in the Category of “International Relations”

Rothschild, Rosenberg, and Schloss, all upper class European families who collected art masterpieces by the thousands over several generations. Theirs were some of the most important collections plundered by Hitler’s Nazi regime during the Holocaust. Until the 1920s, these Jewish families had lived as integral parts of German society. By 1925, Jewish people accounted for 0.9 percent of the 62 million German population. There were about 522,000 Jews, many of whom were self employed and included scholars, art collectors, aristocrats, and rabbis.1  By the end of January 1933, the SS (SchutzStaffel or protective elite forces of the Nazi Regime) began to seize, sometimes by force, government and institutional property. In March of 1933, Hitler passed the Enabling Act, an Amendment to the Weimar Constitution. The Enabling Act gave the government absolute power by no longer requiring the involvement of the Reichstag or Congress for future legislation.  The creation of this law abolished almost all liberties of non Jewish and Jewish people alike.2  As the German Empire grew so did its systematic application of new oppressive powers. After the annexation of Austria on March 12, 1938, the Third Reich passed new laws which abolished legal recognition of all Jewish peoples. This made it easier for the Third Reich to confiscate Jewish property. On April 26, Jewish property had to be registered with the government. Then, the systematic imprisoning of Jews in concentration camps gave German authorities free reigns to pillage at will. This began the “Aryanization” of property, a process by which Nazis evicted Jews from their businesses and homes and transferred all property titles to their own ethnic group.3 These laws were a way to systematically document property, but also to identify Jewish families, making it easier for the Nazi regime to persecute them.  Many art pieces of lesser importance were sold to create profit that funded Germany’s war machine and the concentration camps throughout Germany and in the annexed territories. This set the stage for the large scale genocide of the Jewish population. Germany institutionalized the theft of artwork, religious artifacts, and books during the Holocaust to concentrate the wealth in the hands of Hitler. As a mediocre painter who failed to get into art school twice, Hitler had a deep fascination for the arts. Thus, he spared the artwork (primarily for his personal collection) instead of destroying it, as was done to most other non-valuable possessions in Jewish businesses and homes. A conservative estimate suggests that during that time over 300,000 stolen artwork and antiques along with more than 2 million manuscripts and books were removed from their rightful owners. Most of these artworks came from France since France had the biggest collection of artwork in Europe with over 100,000 artworks out of the 300,000 stolen. In order to persuade his followers and soldiers, Hitler created the Einsatzstab Reichsleiters Rosenberg (ERR), a cultural appropriation task force and justified it in a memorandum on November 3, 1941 that provided the legal and moral basis for the theft of artworks across Europe.4

Nazis created a systematic way of removing all artwork from across Europe. The Nazi regime coordinated the transfer of art from art dealers. The art taken was moved out of the country through a system of railways to the storage facilities or caches. Here, each collection taken from art dealers and was coded with a letter that corresponds and a number. For example, the Rothschild Collection, stolen from the Rothschild family, was coded with an R and then a number like so “R1400”. Along with the Rothschild, the Goodman, Rosenberg, Schloss, and Kann Collections were also looted primarily during the invasion of France.5 When France was invaded, under the order of Hitler, the ERR sent out a message to the French people over Jewish art. The art in France was moved to the Louvre, from there, Hitler’s high ranking men would decide which pieces were sent to Berlin and which would stay in France. If a piece was selected, it would “immediately be inventoried, packed and transported to Germany by the ERR”. Art that did not make the cut was sold at auction with funds claiming to benefit the French state or dependents of war casualties. The now “owner-less” property was sent to a salvage location, usually a town in the southern part of Germany near the border of Austria called Neuschwanstein. The castle of Neuschwanstein was a prime location since it was close to the border of Austria and is a fairly isolated location. The train consisted of 25 express baggage cars that would carry art, antiques, furniture, and ornaments. On March 15, 1941, this train would carry some of the most important art collections including Seligmann, Rothschils, Halphen, Kann, and others.6 Prior to invading the Netherlands, Austria, and France, Hitler would send in elite teams to identify important works of art and collections. This led to the theft of many important and highly valued pieces, such as the Ghent Altarpiece and Michelangelo’s Bruges Madonna.7

The Ghent Altarpiece of 1432, also known as the “Adoration of the Mystic Lamb”, by Jan and Hubert van Eyck is considered one of Europe’s most significant works of art. The painting was housed in Paris, originally as a war trophy before moving it to Saint Bavo’s Cathedral in Belgium. The painting has two wings that open outwardly while the center does not move with 20 individual panels in total.8  The painting stood at almost 12 feet high and 16 feet wide. In May 1940, German forces had captured Belgium. At first, Belgians sent their most beloved artworks to the Vatican. But once Italy declared war and it sent the painting back to Paris. The reason why Hitler went after this piece is that 6 of the 20 panels belonged to the German state prior to 1919. The treaty of Versailles had forced the German State to give those panels to Belgium as reparations. In July of 1942, a secret delegation was sent to negotiate with the French to hand over the piece. When the French refused, German forces stole the painting. Michelangelo’s Bruges Madonna was housed in the Cathedral of Notre Dame and is another one of Europe’s most significant pieces. Made of the richest white marble in Italy, the Bruges Madonna is a life size creation of the Virgin Mary holding the Christ child.  On September 7, 1944, German forces removed the Bruges Madonna from the church.9

As the Allied forces moved closer and closer, Hitler ordered the paintings and artworks to be scattered across Europe. One of hiding places was a salt mine known as the Steinberg mine in the Sandling Mountain in Austria. In the winter of 1943-1945, German forces began to move the art into this small rural area. From May 1944-April 1945, more than 1,687 paintings arrived. In the fall of 1944, the Ghent Altarpiece arrived from the salvage point of Neuschwanstein and Michelangelo’s Madonna of Bruges arrived shortly afterwards by boat in October of 1944. Along with the close of the war, a small group of men dispatched by the US government were hunting all across Europe for stolen art work. Unlike the army, the majority of the group were not soldiers, but rather professors specializing in art. In 1945, the Monuments Men recovered both Michelangelo’s Madonna of Bruges and the Ghent Altarpiece. By the end of WWII, the Monuments Men would end up recovering thousands of artworks and sculptures.10

The are other sources of stolen art inside the US as well. Most recently, a lawsuit brought about in 2015. It is against the descendants of Jewish victims of the Holocaust and the Norton Simon Museum in Pasadena, California and the Fred Jones Jr. Museum at the University of Oklahoma. In the wake of World War II, museums and art collectors rushed to buy art without checking how these pieces ended up in the auction. Thus, most purchased stolen works of art by accident. Most museums who are in legal battles such as this, claim that the descendants have waited too long to claim  the artwork and usually fight under technical terms.11

During the Holocaust, thousands upon thousands of refugees fled their country to other countries around the world. When the Holocaust ended and Nazi Germany fell, many Jewish and non-Jewish peoples began to make claims for their property or art stolen during the war. They claimed governments, especially the US and Germany, as a whole took part in stealing artwork and property. On these grounds, the governments claimed immunity due to an agreement titled the Termination of  the Occupied Regime in the Federal Republic of Germany. This waved any German made claims against the US for property theft during WWII by US government officials or US soldiers.12 The US also has laws in place that prevent US citizens from suing foreign governments which was brought into question by the Altmann vs. Austria case. During WWII, Altmann and her family owned the famous painting of her Aunt known as the Lady in Gold. Painted by Gustav Klimt, the family owned 5 paintings from him which were taken by Nazis during WWII. Even though she had accurate claims and documentation, she could not sue the Austrian government on part because of the Foreign Sovereign Immunities Act (FISA) of 1976. She sued in 2000 after a new Austrian law passed in 1996 declared all Nazi transactions void.13 She won the case and received the paintings, later handing them over to a museum in New York. This case was a major victory for victims of art looting since it opened a small clause in the FSIA which states that “lawsuits regarding Holocaust era looted art and other stolen property can be brought against foreign governments in US courts”.14

Even though thousands of pieces of art have been found and returned, thousands still have no identifiable owner.  400 paintings hang in the Louvre that are unclaimed paintings, 100 are at the Musee d’Orsay, and 40 others reside in at the Pompidou Center. All together, there are about 2000 unclaimed paintings that are currently in French museums alone. Unclaimed sculptures are placed in the Elysee Presidential Palace.15 As of 2015, hundreds of millions of dollars worth of artworks have been recovered with large art caches still being discovered inside Germany. The most recent in 2013 with 1500 pieces of art with paintings by Picasso, Matisse, and Chagall were found. In March 2015, the El Greco Portrait of a Man was found after 70 years missing.