How the Soviet Union Compelled the United States to Build the World’s Fastest Jet: The Lockheed A-12 OXCART 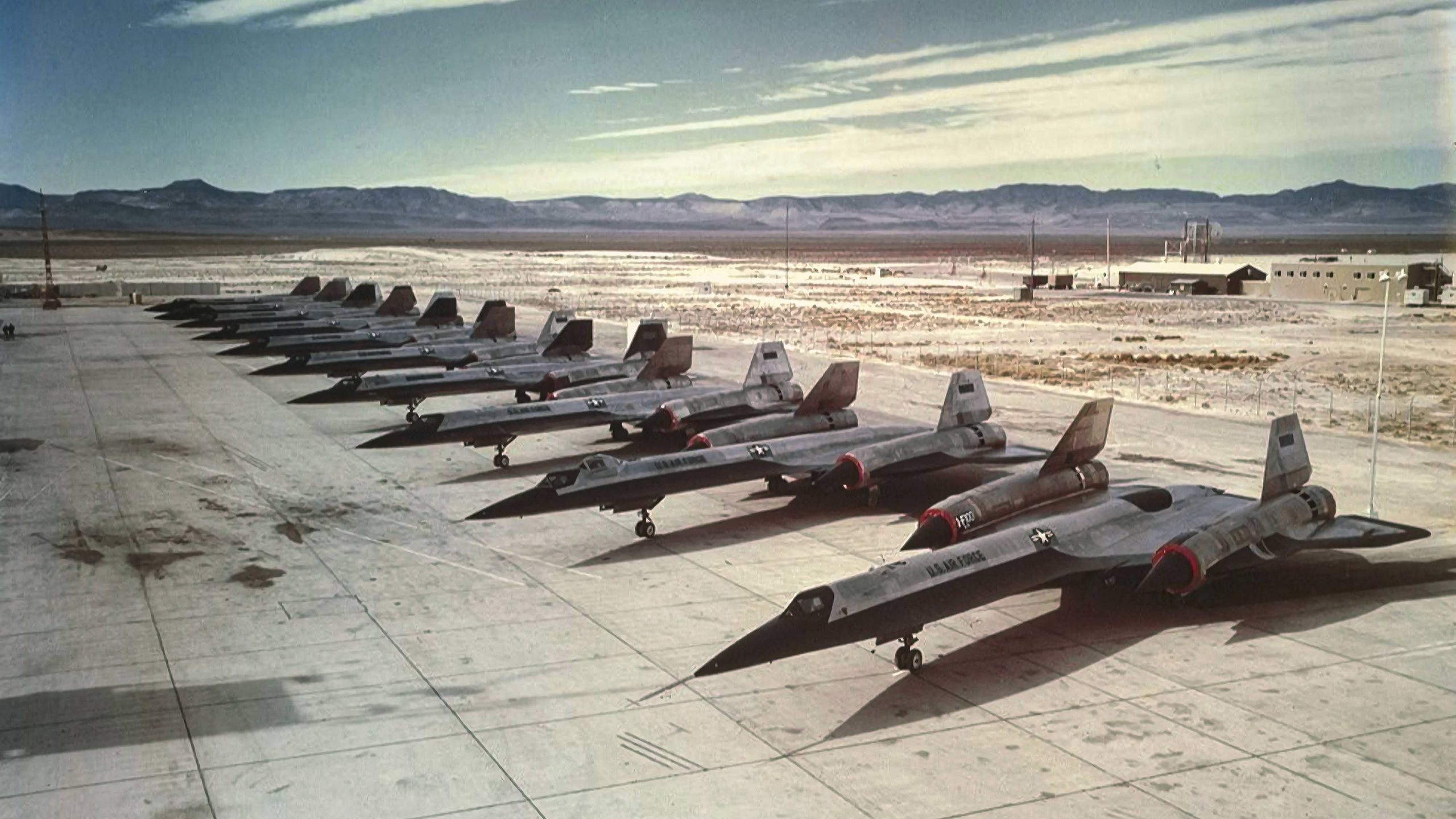 On March 1, 1960, Francis Gary Powers departed from a U.S. airbase in Pakistan in a U-2 Spy Plane. His mission was to fly over the Soviet Union and gather intelligence by taking pictures on the way to another American airbase in Norway. Flying at over 70,000 feet in altitude, Powers thought he would be safe and undetected by Soviet air defenses. Suddenly, Powers’ U-2 was hit by a missile, and his controls stopped responding. The blast had snapped off a wing, which sent Powers spiraling toward the earth in an uncontrollable spin. He successfully bailed out of the plane and parachuted to the ground where he was captured and taken to KGB headquarters.1

The capture of Powers, along with wreckage of his U-2’s camera and flight plans, strained Cold War relations between the USSR and the United States. A major peace summit in Paris was cancelled after President Eisenhower refused to apologize for violating Soviet airspace. Meanwhile, Powers was put on trial for espionage and was sentenced to three years in prison and seven years of hard labor. In February 1962, the Soviet Union traded Powers and a detained American student for Rudolf Abel, who was a Soviet spy captured in the United States. As the 1960 U-2 incident demonstrated the U-2’s vulnerability to Soviet air defenses, how would the U.S. gather intelligence on the USSR?2

Even before the U-2 became operational in June 1956, the CIA estimated that improvements in Soviet air defenses would make the U-2 obsolete between eighteen months and two years. When U-2 aircraft began flights over the USSR, this estimate was reduced to six months after Soviet defenses demonstrated the capability to track the aircraft with radar. Because of this, the CIA established Project RAINBOW to extend the U-2’s operational lifespan by reducing the aircraft’s vulnerability to Soviet radar. The project proposed two modifications, one of which was called the “Trapeze.” This alteration utilized fiberglass rods that would be attached to the U-2’s wings, where a small-gauge wire with precisely spaced ferrite beads (small electronic components that suppress high frequency noise in electronic circuits) were strung along the edge of the fiberglass rods. Although this system was designed to absorb incoming radar pulses, the modification was unsuccessful. Another modification nicknamed “Wallpaper” would use plastic material containing a printed circuit designed to absorb radar pulses. This material would then be glued to sections of the U-2’s fuselage, nose, and tail. Although both of these systems provided some protection against radar, they were ineffective at deflecting some frequencies Soviet radars used. Not only was Project RAINBOW’s efforts to mask the U-2 from radar not only ineffective, the modifications also made the aircraft even more vulnerable to missiles since they reduced the maximum altitude of the aircraft.3

Due to Project RAINBOW’s failure, in the fall of 1957, CIA officer Richard M. Bissell began enlisting contractors to determine how the probability of shooting down an airplane varied with speed, altitude, and its radar cross section. These tests found that supersonic speed greatly reduced an aircraft’s chances of being shot down, and that pursuing a new supersonic, high altitude aircraft was worth consideration. Although the CIA knew that they needed a new aircraft, the agency needed to secure funding to pursue such an aircraft. CIA officials approached President Dwight D. Eisenhower and his Scientific Advisor, Dr. James Killian, who approved of the program that would be called Project GUSTO. Bissell approached two aerospace companies, Lockheed and Convair, to submit definite proposals for such an aircraft. As both companies completed their proposals, President Eisenhower was briefed once again on July 20, 1959, to give the final approval.4

By August 1959, Project GUSTO formed a selection panel and received aircraft designs from both Lockheed and Convair. The Lockheed proposal would become known as the A-12, and featured a cesium additive in the airplane’s fuel that decreased the radar cross section of the airplane’s afterburner. Convair’s proposal, known as The Kingfish, utilized a stainless steel honeycomb skin and a crew capsule escape system that eliminated the need for a pilot to wear a pressure suit. The Kingfish’s engines were placed inside the fuselage, which greatly reduced the aircraft’s radar cross section. Fiberglass engine inlets and Pyroceram (a type of glass/ceramic material) along the leading edges of the wing also reduced its radar visibility. Since the CIA was concerned about cost overruns that the Air Force encountered with the Convair B-58, Project GUSTO’s selection team chose Lockheed’s A-12, after which the CIA ordered twelve aircraft. The A-12’s development would become known as Project OXCART.5

Engineers at Lockheed’s Advanced Development Projects, also known as the Lockheed Skunk Works, encountered many problems developing the A-12. The aircraft was expected to fly at Mach 3.2 (over three times the speed of sound) at an altitude of 91,000 feet, on top of having the smallest radar cross section as possible. Skunk Works engineers had to balance all these features into a single aircraft. The greatest challenge engineers faced was the heat produced by air friction at such high velocities. The aircraft’s skin would reach 600 degrees Fahrenheit, or up to 1,000 degrees Fahrenheit in the A-12’s J58 engines. Skunk Works engineers decided that over 90 percent of the A-12’s airframe would be built out of a titanium alloy to withstand such thermal stresses. Although titanium was to be the material of choice, it proved exceedingly difficult to work with. Titanium’s extreme hardness caused normal tools to break or wear out. Engineers had to design custom tools that would be used to mold titanium for the A-12’s construction. By the end of the program, a single drill bit could drill 100 holes before becoming dull.6

Acquiring all the Titanium needed for the A-12 was another challenge altogether. Lockheed was forced to reject over 80% of titanium received from Lockheed’s supplier, Titanium Metals Corporation, since the metal did not meet quality standards. Since U.S. titanium companies could not provide titanium of sufficient quality, Lockheed and the CIA looked toward the largest supplier in the world: The USSR 7 Ben Rich, a Skunk Works engineer, recalls that “Our supplier, Titanium Metals Corporation, had only limited reserves of the precious alloy, so the CIA conducted a worldwide search and using third parties and dummy companies, managed to unobtrusively purchase the base metal from one of the world’s leading exporters–the Soviet Union. The Russians never had an inkling of how they were actually contributing to the creation of the airplane being rushed into construction to spy on their homeland.”8

Even though the A-12 OXCART had been developed to replace the U-2 to conduct flights over the Soviet Union, its deployment had been doubtful. After the 1960 U-2 incident, presidents Eisenhower and Kennedy stated that no more flights would be conducted over the USSR. However, these statements did not apply to other Cold War adversaries, such as Cuba. The Cuban Missile Crisis of 1962 presented a need for reconnaissance aircraft since orbital satellites at the time lacked good coverage of the area. Although U-2s already fulfilled this reconnaissance role, they would soon be threatened by Soviet air defenses within Cuba. In the summer of 1964, Soviet Premier Nikita Khrushchev warned western officials that once U.S. elections were held in November, U-2s flying over Cuba would be shot down. This threat forced Acting Director of Central Intelligence Gen. Marshall S. Carter to order the A-12 OXCART to reach emergency operational readiness by November 1964 in case Khrushchev carried out his threat. This accelerated the production of the A-12, and although the aircraft were ready by the November 5th deadline, they were reserved for more sensitive missions.9

The A-12 would receive its first mission after President Johnson approved Operation BLACK SHIELD in May 1967. The aircraft’s first flight was conducted over North Vietnam and the Korean Demilitarized Zone at Mach 3.1 and at 80,000 feet. The A-12 successfully photographed 70 out of 190 known surface-to-air missile sites and nine priority targets. Operation BLACK SHIELD flights continued to monitor North Vietnam and North Korean air defenses. During one of these flights over North Vietnam, the A-12’s reduced radar cross section would be put to the test. On October 30, 1967, CIA pilot Dennis Sullivan detected radar tracking his A-12 from two Surface-to-Air Missile sites. As he passed over the country a second time, the North Vietnamese fired at least six missiles at the A-12. Dennis witnessed three missile detonations behind his A-12, which was travelling at Mach 3.1 at around 84,000 feet. Postflight inspection revealed that a piece of metal had penetrated the underside of the right wing, which was likely debris from one of the missile detonations that Dennis had observed.10

One of the last yet crucial missions of the A-12 occurred on January 26, 1968. The A-12 made its first flight over North Korean airspace after North Korean forces seized the USS Pueblo. Its mission was to determine if North Korea was planning any large-scale hostile action following this incident. As photo interpreters examined the photos that were taken, they discovered that the missing USS Pueblo was in Wonsan harbor. The A-12 OXCART would see its final deployment on May 8, 1968, after only one more flight over North Korea.11

Even before its last deployment, the CIA’s A-12 OXCART program was terminated on December 28, 1966. Largely due to the newer SR-71 being operated by the Air Force, the U.S. Government saw no need to maintain two fleets of expensive aircraft within the two government agencies. Since both the CIA and the Air Force claimed their aircraft was better, the two organizations pitted the two aircraft against each other in a flyoff code-named NICE GIRL. On November 3, 1967, an A-12 and SR-71 flew identical flight paths separated by one hour, flying north to south above the Mississippi River. Although the results of the flyoff were inconclusive, President Johnson’s administration allowed both fleets of aircraft to remain in service until the A-12 was finally cancelled on May 21, 1968.12

Although the A-12 began phasing out, the U.S. Air Force would continue to operate the newer SR-71. Two aircraft developed from the OXCART program would continue operations, including the YF-12. Developed to carry missiles instead of cameras, the YF-12 was considered by the Air Force to become a new high speed, high altitude interceptor. Although only three would be produced as prototypes, the YF-12 aircraft would be transferred to NASA to perform flight research until 1979.13 Another A-12 variant, the M-21, would be put out of service after the aircraft’s D-21 drone collided with the M-21 after launch, killing one of the occupants. This accident forced the M-21 to be taken out of service. Since the Air Force was left with 38 D-21 drones, the aircraft would be modified to be carried onboard B-52 bombers and continue service until 1971.14

Built as a response to growing missile threats in the USSR and other Soviet backed nations, the Lockheed A-12 performed crucial intelligence missions throughout the Cold War. Soviet threats to shoot down U-2 aircraft along with improving Surface to Air Missiles and radar technology forced Lockheed engineers to quickly put the A-12 into service. Without the OXCART, the CIA would have never been able to gather the intelligence it required, and more U-2 pilots like Francis Gary Powers would have been shot down. The technology from the OXCART program pushed aerospace technology to new heights and laid a foundation for future stealth aircraft and supersonic research.

I'm an Eagle Scout, Trumpet Player, Gamer, and a Mechanical Engineering Student from San Antonio, Texas. My passion is all things aerospace, and one day I hope to become an Aerospace Engineer. In my free time I enjoy volunteering in scouting, playing music, or gaming with friends. I look forward to graduating from St. Mary's University in May 2023 to help create the next SR-71, F-22, or X-15.
Author Portfolio Page