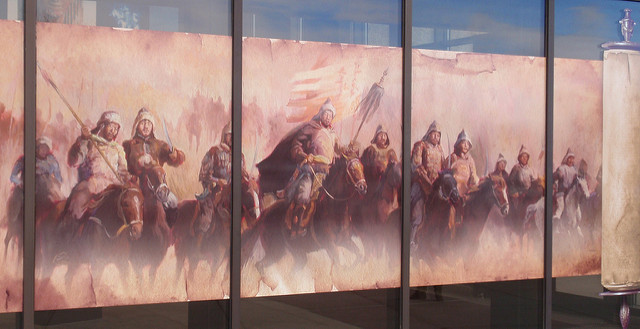 Genghis Khan was the savage and ruthless military leader who is credited with unifying much of Eurasia and having founded the world’s largest empire in the thirteenth century. To do so, he led many military campaigns conquering one land after another, and, after the conquering, he declared his rule over the vanquished. Genghis Khan’s image as a ruthless and determined conqueror has often painted the Mongolians he led as being harsh and bloodthirsty. However, he and his armies were also willing to show much mercy.

His oldest but not directly related son was Jochi Khan. Genghis Khan’s wife was kidnapped, and when he rescued her, she had become pregnant with Jochi.1 Despite this fact, however, Genghis Khan never saw him as anything other than his own. Even on his deathbed, he contemplated appointing Jochi as a successor, as it was customary to pick the eldest son. One of Jochi’s step brother’s did not agree to this, being that Jochi wasn’t actually related by blood; Jochi replied to his step brother with, “‘I have never been told by my father the Qan that I was different from my brothers. How can you discriminate against me?”2

As he was treated like one of his father’s own, Jochi was given his own army at the age of twenty-six. This was popular among his family as his father was keen on delegating several military positions to family and friends; this further allowed his sons to develop their leadership skills.3 However, they would still take orders from their father, and Jochi was assigned to take over several villages, cities, and towns. On one of his assignments, Jochi was ordered to take over the town of Saganak around the year 1220.4 Jochi, being a smart man, knowing that he would indeed own the town afterwards, sent a local countryman to ask for the town’s surrender. Surely, he thought, they must receive the message much better coming from one of their own. He even made an agreement with the governor that the messenger would not be harmed nor would his people. This triggered an emotional response of the opposite desired result, in which the townspeople were insulted and killed the messenger despite the agreement. Jochi was very unhappy about the turn of events, and he decided to attack the town, killing all of its soldiers and half of its citizens. His message was clear: surrender or be destroyed.5

However, Jochi was still a sympathetic leader and would treat the people of towns with mercy, usually depending on the town surrendering immediately when requested to do so. He felt that there was no need for additional violence, and that he would ultimately end up being in charge of the town. There are accounts of towns going out of their way to surrender before any possible violence came to them, or after they knew they had lost. On one such occasion, both of Jochi’s strategic styles came into play. A small town with a weak military but a large wall surrounding it refused to surrender until after a three-day siege, and only when seeing that defeat was imminent. Jochi refused their surrender, since it was not made before he had exhausted his forces, and he took the town by force. He then ordered all the inhabitants to the outside of the wall. Instead of killing them, however, he merely got them out of the way, so that his army could loot their homes without any problems.6

Jochi went on to lead larger conquests with his family’s armies and his own, although he started growing farther away from his family and military duties.7 : A Historical Encyclopedia (Santa Barbara, California: ABC-CLIO, 2017), 162-163.] This version of peaceful conquest, coupled with several benefits of being under Khan’s rule (such as the unification of the silk road and the building of an infrastructure for the entire empire) meant that while a Mongolian invasion was always a looming threat, simply submitting to the superior Khan rule was not a terrible alternative.