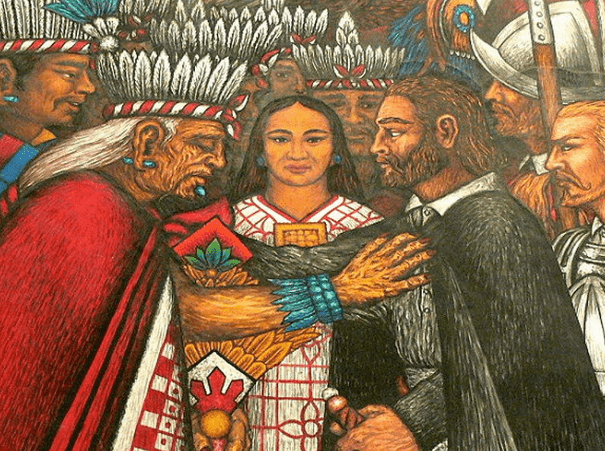 Largely due to the importation of disease and use of superior weapons, the Spaniards were able to conquer the Aztec capital of Tenochtitlan, kill the empire’s last emperor, Cuauhtémoc, and bring the Aztec empire to an end. Few know of La Malinche, the indigenous interpreter of Hernán Cortés, whose linguistic abilities were used to facilitate important conversations between the Spaniards and the indigenous leaders. Without the help of La Malinche, perhaps the Aztec empire would have survived.

Born between 1502 and 1505, La Malinche was named Malinalli Tenepal, the first part of her name being a Nahuatl term for the twelfth day of the month in correspondence to the Aztec calendar, and the second part of her name meaning “lively.” She was born of nobility in Paynala within the region of Veracruz. Her troubles started at a young age after the death of her father. La Malinche was ousted from her home to ensure her new half-brother received the inheritance of the family instead of her, since she was the eldest child. She was given to “some Indians of Xicalango.”1 Then the Indians gave her to a nobleman in Tobasco, a region in the Yucatan. When Cortés arrived to Tobasco, he was offered twenty slaves, one of them being La Malinche. Having lived in Veracruz, a Nahuatl-speaking region, and then being sold into a Maya-speaking region, La Malinche knew both languages and she was soon recognized for the linguistic talents that could benefit Cortés in his conquests.2

The few glimpses of La Malinche and how her presence as an interpreter accelerated the fall of the Aztec empire can be found in the writings of the Spanish explorers, specifically from Hernán Cortés, her “lord and master.”3 From the second letter Hernán Cortés wrote to Emperor Charles V, dated October 30, 1530, Cortés speaks of La Malinche as “a female interpreter that I had, who was a native of this country, and whom I obtained at Putunchún on the Rio Grande.”4 This confirms the vague aspects of her life that we already know. But most importantly, in this context, this letter goes on to tell of a scenario in which La Malinche saved the Spaniards from an ambush by the Cholulans. La Malinche was told by the wife of a native leader that they planned to attack the Spaniards and if La Malinche came with them, she would be protected. La Malinche delivered this message to Cortés, which ultimately led to the massacre of Cholula and provided a direct path to march towards Tenochitlan, the capital of the Aztec empire.5 This leads to the question of whether or not La Malinche was a traitor or a survivor. Did she explicitly want the Aztec empire to fall or did she just want to save herself from the carnage?

With no traces of primary sources from La Malinche herself, her story has been retold by various scholars without much consistency, nothing ever being certain. Up until the twentieth century, La Malinche was viewed as a traitor to her country Mexico. In 1861, on the celebration day of Mexico’s Independence, Ignacio “El Nigromante” Ramírez, a Mexican journalist, addressed the Mexican people by saying, “One of the mysteries of fate is that every Mexican owes his downfall and disgrace to a woman, and to another woman his salvation and glory; the myth of Eve and Mary is reproduced everywhere; we indignantly remember Cortés’s mistress and will never forget, in our gratitude to Doña María Josefa Ortiz.”6 La Malinche is seen as playing a key role in the subjugation of the Mexican peoples to Spain, while Doña María Josefa Ortiz did the contrary and liberated the country. However, many Chicana writers and modern scholars are trying to rewrite the tale of La Malinche to understand the complexities of her choices and to vindicate her. For example, Gloria Anzaldua promotes the idea that La Malinche had a “new consciousness,” that she voluntarily served as the interpreter of Cortés not only to save herself, but also because she knew that a new mestiza culture was going to be born (especially considering she had a son with Cortés in 1524).7 She made a conscious effort to exchange language and cultural aspects from each side in order to facilitate the emergence of the new mestiza society; however, with that came brutal consequences in the shape of warfare and mass death in the New World.

Whether or not La Malinche’s role as Cortés’s interpreter was traitorous, simply an effort to survive, or some other complex reason involving love for Cortés, hate for the Aztec empire for the cruelty she faced after being ousted from her home, or promotion of the new mestiza culture, no one will ever know the true story of the Indian, slave woman who traveled alongside Cortés towards the culmination of the Aztec empire.