Life and Death in the Carlisle Indian Industrial School 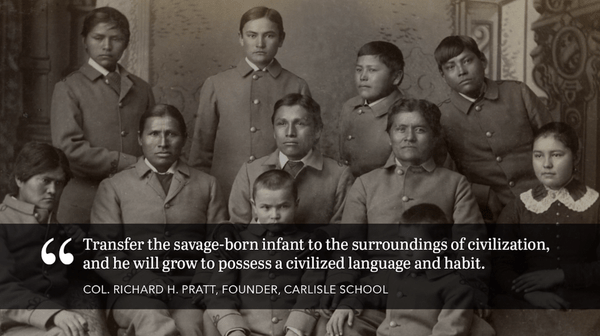 Going to school for the first time is always rough. It’s every child’s annoyance and even disdain when it comes to school. Carlisle seemed like any ordinary school. It had classrooms, teachers, libraries, things that any school would have. Only this school had a unique purpose. This school was not for everyone; in fact, it was only for one group of people: Native American children. The purpose of this school was to strip these Native American children of every native tradition and custom they ever had. Their traditional clothing made of soft leather and Mulberry and redwood bark were replaced with uniforms.1 These childrens’ names were officially changed to Christian names, and they were forbidden to speak their native languages while on school premises; all teaching instruction was in English.2 Additionally, both boys and girls had to have their hair cut to an appropriate length, which was based on Anglo-Saxon cultural norms. After the students had their hair cut and their Native garb removed, they would have to choose a Christian denomination.3 The one connection the students had to their culture was one ritual dance that was performed by the students for the comic entertainment for visitors. Any other traditional dances or rituals were prohibited.4 How did this school come about?

After multiple failures of the United States government to suppress Native Americans though the use of brutal military campaigns, Thaddeus Pound, a third-term US congressman, promoted the idea of assimilation. In 1881, he proposed that it would be cheaper and easier to assimilate Native Americans rather than to continue fighting them. Stressing the civilizing of Native peoples, Pound pressured Congress that this had to be done for humanitarian purposes. The real purpose, however, was to sever the children culturally and psychologically from their culture, thus saving the Indian but at the same time destroying them by destroying their culture.5 Through this debate came the notion of educating Native children into white culture and erasing their culture through the use of forced assimilation.

The Carlisle Indian Industrial School opened in 1879 in Carlisle, Pennsylvania, by Lieutenant Richard Henry Pratt with 136 Native American Children.6 However, at the turn of the decade, the federal government acknowledged assimilation practices as Indian Policy. Carlisle then became approved as a role model for other off-reservation schools, which led to the creation of twenty-three other similar schools.7 By 1902, the number of such schools had jumped to ninety-two schools managed by the Federal government nation-wide.8 The Carlisle Indian Industrial School focused mostly on teaching low level skills to children, training them for jobs as servants and manual laborers. Education at Carlisle only lasted three years with a focus on basic English, math, writing, and labor skills.

Over time, classes grew to include students who graduated from the eighth grade and higher levels of education. After graduating, most students returned to the reservation to do small jobs such as shoe making, printing, or tailoring. Unfortunately, most of these trades proved useless on the reservations.9 Carlisle, along with other off-reservation schools across the US, held large celebrations and parades dedicated to showing the transition of students from Natives to Anglo-Saxon Americans through the use of parades, floats, and the occasional play. Most of these carried offensive and racist messages, such as “Anglo-Saxons rule the world, we submit” and “wise statesmanship demands a homogeneous population,” which were used to promote and prove the power of assimilation over Native-American populations. This led to the belief that Native culture was just a dream and not something that will grow into the Anglo-Saxon culture.10

Carlisle also sponsored extracurricular activities, which included a music program, a student-run newspaper, and a library. Most of these programs were unintended by the federal government and were created mostly by donors, teachers, and the students themselves. For instance, the library was created through the efforts of O.H. Bakeless and Pratt, who wanted Native children to have access to encyclopedias, medieval stories, and Greek and Roman history. Along with that, they added classics such as Little Women, Black Beauty and religious texts. Teachers and sponsors also played a key roles in growing the school and encouraging pupils to grow outside of the low level jobs the federal government intended for them, by providing additional funds and resources.11

The Carlisle experience had lasting repercussions for these children. Some children were able to leave reservations and find substantial employment, but unfortunately, the overall effects leaned towards the negative rather than the positive spectrum. Children experienced cultural isolation, which led to homesickness, and in extreme cases, to alienation and depression when they returned to reservations. Families that were reluctant to send their children to federal schools faced threats from the government that included removing federal funding and welfare from the family. Hence, even if the child or the family didn’t want to attend Carlisle or other schools, they had no choice. 12 Gertrude Bonnin, also known as Zitkala-sa, was a former student from Carlisle and went on to become a teacher at the school.  She, like many students, had been scouted out by missionaries prior to attending Carlisle Indian Industrial School. In her case, she was recruited by the Manual Labor Institute, a Quaker mission school in Indiana. She was recruited at the age of eight, and she recalled the traumatic experiences she and others faced when going through the assimilation process. In her essay, School Days, she recalls how she hid from teachers when they told her they were going to cut her long, traditional braids. They ended up dragging her out from under a bed, tying her to a chair, and then cutting her braids with a pair of scissors. She describes this moment as the moment she lost her spirit. After Carlisle, she found herself alienated from her traditional mother and struggled to reconnect with her family for the rest of her life. She became a teacher at Carlisle for two years before going on to found the National Council of American Indians in 1926, where she served until her death in 1938. She was a prominent Native-American rights activist.13

Out of the 10,000 that went into Carlisle, 186 children from nearly fifty different tribes died, most dying of illnesses such as tuberculosis, influenza, and trachoma, an infectious eye disease. Tuberculosis, however, was the deadliest of the three. Families of the deceased children could not claim the bodies of the children, so the children’s bodies were never returned to the tribe. The children instead were given Christian burials and were buried in the Carlisle cemetery. It wasn’t until the year 2000 that the children were given proper Native burial rites, but unfortunately, the correct identification of each body had been lost due to time, loss of accurate documentation, and several relocation projects on the Carlisle Cemetery. The school is now an active military base with the cemetery located right behind the army barracks known as the Carlisle Barracks.15