Making a Monster: The Birth of the Minotaur 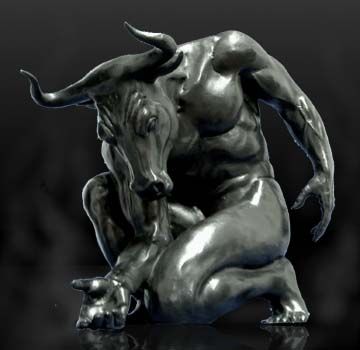 When people talk about the ancient mythological creature Minotaur, a ferocious beast immediately comes to mind and perhaps the infamous myth of the labyrinth as well. What people may not know, though, are the interesting details of the events that lead up to the birth of the mighty Minotaur. What is universally recognized as a feared creature of unusual birth was actually created from unfortunate actions between a selfish king and a vengeful god.

King Minos and his wife Queen Pasiphae led a good life ruling over the island of Crete. Minos held power over multiple islands of Greece and was recognized for his success and power by many. In an attempt to prove his rightful claim as King of Crete, Minos had sworn to locate the best bull he could find among his cattle, one that would be very favorable to its intended receiver. Minos would then take this great bull and sacrifice it to Poseidon, god of the seas, as he did each year in order to secure his ownership of the throne. One year in particular, among King Minos’ herd, there birthed a magnificent bull, one that possessed a unique kind of beauty that King Minos had never seen before. Minos truly was in awe of this magnificent bull, so much so that he found himself captivated by its beauty, and he realized that this bull was something he did not want to give up to the promised Poseidon. In fact, Minos purposefully chose to overlook the magnificent bull when making his decision, and settled on a less attractive bull to sacrifice to Poseidon.1

Watching him and his deceitful actions very closely, Poseidon took notice of King Minos’ plan in sacrificing a lesser bull to keep the best for himself. This made Poseidon very angry, and he immediately began thinking about how to discipline Minos for his selfishness. Poseidon saw that Minos loved his wife Pasiphae immensely, and with this knowledge, constructed a plan that would leave Minos and Pasiphae in the presence of a monster. 2

Poseidon cast a curse upon Queen Pasiphae, one of love, which she could not escape. Her love was not for her husband; instead, she felt love for his magnificent bull. Pasiphae would be found swooning over the magnificent bull as if it were a handsome and powerful man ready to take her into his strong arms. Alas, she was so utterly infatuated with the magnificent bull that she constructed a plan to lure the bull towards her, and hopefully lay with her romantically.3

Queen Pasiphae instructed a craftsman of the island, Daedalus, and his son, Icarus, to build her a wooden structure that represented a near-perfect body form of a female bull. She insisted that the piece be built as realistically as possible and large enough for herself to comfortably fit inside without revealing that she was human. In spite of her odd orders, Daedalus and Icarus did what the Queen asked of them. As a finishing touch, Queen Pasiphae placed a large cow hide over the structure so that the magnificent bull would notice the structure and take it as a female looking to mate. The Queen rolled the structure out to the field where she would often see the magnificent bull grazing day after day. She strategically placed herself in the view of the magnificent bull, stepped inside the structure, and waited patiently for the bull’s approach.4

After grazing for a bit, the magnificent bull caught sight of what it thought was the beautiful female and approached it. Before long, the Queen’s plan worked, as the magnificent bull fastened itself upon her and together, engaged in sexual and intimate relations. As a result of this, Queen Pasiphae became pregnant with the baby of the bull and upon its birth realized she was carrying something horrific inside of her.5

Just as Poseidon intended, Pasiphae had relations with the bull she loved and later birthed an unusual creature, born half-bull, half-human to be known as the Minotaur.

The creation and birth of the Minotaur, as well as other monsters, typically is done in response to acts of sin. In this particular case, King Minos’ egotistical actions led him to break a promise made to a god, and in return, that god made Minos’ wife feel the same love that her husband did for the magnificent bull, giving in to her abnormal fascination and eventually birthing an infamous monster of ancient Greece.6