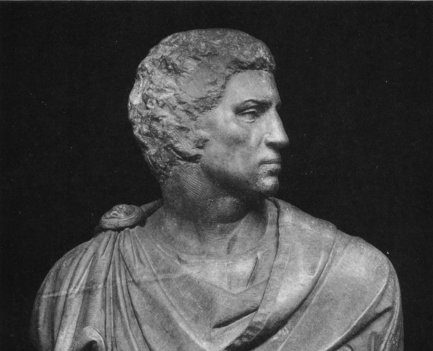 Marcus Junius Brutus the Younger, better known as Brutus, is descended from Lucius Junius Brutus, founder and first consul of the Roman Republic in 509 B.C.E.  The political future of Rome was so important to Lucius that he ordered his oldest two sons put to death for their desire to restore Rome to a monarchy.  Lucius spared the life of his youngest son and it is through him that Marcus was born.2 Brutus’ own father, Marcus Brutus, was killed by Pompey the Great during a revolt.3

So who was this Brutus? He was a typical Roman, who received the traditional education of the Roman elite and was greatly influenced by the writings of Plato. Upon completion of his education, Brutus was given a position in the government.4 In both his marriage and in his public life, Brutus was expected to align with Caesar, but instead, he made his peace with Pompey the Great, eventually siding with him during the Roman Civil War in 49-48 B.C.E.5

Brutus was captured at the Battle of Pharsalus and spared by Caesar, causing Brutus to switch sides to Caesar.6 It is important to note at this time that Caesar had a special fondness for Brutus, believing Brutus was his son, born out of a love affair Caesar had with Servilia, Brutus’ mother. Out of this fondness, Caesar had instructed his commanders not to harm Brutus should he be captured in battle.7 Caesar pardoned Brutus for his role during the Civil War and gave him a high ranking government job. Brutus in turn convinced Caesar to give a government position to Cassius, Brutus’ brother-in-law.8

It was during this time following the Civil War that Caesar declared himself dictator of Rome, as allowed by the constitution during times of emergency, but not to last more than six months. Caesar wore the robe, crown, and scepter of the general, and called himself imperator. As leader of Rome, he had complete control over the armies. Many senators felt their power being threatened and feared that Caesar would soon appoint himself King of Rome.9

Cassius did not like Caesar, and soon began to plot to end his reign of power. He attempted to recruit his friends and fellow senators, but they refused to go along with Cassius unless he could convince Brutus to join them.10 Brutus had such an honorable reputation that his participation was crucial to the success of the cause. Brutus agreed to participate because of his family history in creating and protecting the Republic at its founding and the ensuing Roman tradition of opposing all forms of tyranny. Both Brutus and Cassius believed that once Caesar was dead, Rome would naturally return to the traditional Republic.11

The group of conspirators had heard that Caesar would be attending a senate meeting on March 15, and they planned the assassination for that day. They knew that it would not look suspicious, since they all had to attend the meeting of the senate and they believed that the Ides of March was a blessed day to make their move, since it was a religious holiday in Rome. Ironically, there was a statue of Pompey the Great, the leader Caesar had killed after the Civil War ended, in the portico where the assassination was to take place as soon as Caesar arrived. The conspirators believed it to be the perfect date and place to make their attempt to restore the Republic.12

However, on the planned day, Caesar was late and the conspirators became worried. When Caesar finally arrived, the senators surrounded him as he took his seat, and the attack began. All the senators attacked at once, creating a frenzy in which many of the them were stabbed in the process; even Brutus was stabbed in the hand. When that attack was over, Caesar was dead.13 The next day, Antonius (also known as Mark Antony), the sole remaining consul, granted all the conspirators amnesty, and distributed provinces to them as rewards. Brutus was given the province of Crete and moved there with his family where he continued to work for the government.14

Meanwhile, Octavian, Caesar’s nephew and heir, was brought to the capital to take Caesar’s place as leader of Rome. Octavian was angry that Antonius had pardoned the conspirators and when the common people of Rome learned of the assassination of Caesar, they too were angry that none of the conspirators had been punished. This rift between the people and the leaders began to cause a rift between Octavian and Antonius. Soon the leaders of Rome began to align themselves between Octavian and Antonius, and another war civil war began. Known as the Post-Caesarian Civil War, this war was between Octavian and his supporters and Antonius and his supporters in order to end the rift that had been growing. It did not take long for Antonius to be defeated by Octavian, resulting in a truce that joined their armies together. This is also when the Second Triumvirate was formed in 43 B.C.E. between Octavian, Antonius, and Marcus Lepidus allowing the three of them to rule Rome together.15

The next civil war in Rome, known as the Liberators’ Civil War, was fought between the Second Triumvirate and the liberators (those who assassinated Caesar and their supporters). Brutus and Cassius were the main targets of the Roman army and separately rallied troops to fight with them. Brutus, according to Plutarch, “was esteemed by the many for his virtues, but loved by his friends, admired by the nobles, and not hated even by his enemies.”16  Because of this, many people in Rome had faith in his motives and believed that while the other senators had murdered Caesar out of hatred and spite for his power, Brutus had participated because he truly wanted to end the tyranny that he believed Caesar had created in Roman government.17 Unable to defeat Octavian’s army, Cassius, fearing being captured, committed suicide.18

Unfortunately for Brutus, his army was not able to defeat the Roman army either, and he admitted defeat at the Battle of Philippi in 42 B.C.E. Also fearing being captured, Brutus fled to the hills with a good friend and fellow soldier. It was there that Brutus convinced his friend to take his sword and hold it upright, Brutus then fell upon his sword, killing himself. Antonius still held much respect for Brutus and had his body wrapped up in the finest purple cloth for the cremation. After he was cremated, his ashes were sent to his mother, since his wife was already dead, another suicide.19

Even after his death, Brutus served as a role model for senators and his story reminded emperors that they served at their own peril if they ignored the senate.20 Brutus did not end tyranny or civil war, with many battles leading to the loss of the Roman Republic. According to Shakespeare, Brutus acted out of honor to protect his home from a tyrant. Dante placed Brutus in the worst level of Hell in the mouth of Satan next to Judas Iscariot.21 Either way one remembers Brutus, one must remember the conspiracy would never have gotten anywhere without the participation of Brutus.