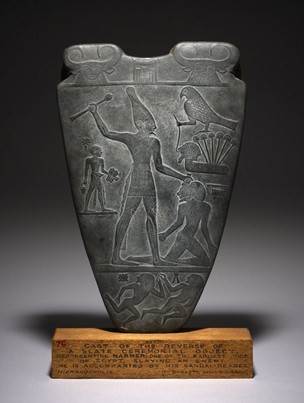 At the dawn of civilization, the Egyptian Nile Valley cradled the richest, most fertile land in the ancient world. Called “the gift of the Nile,” civilizations formed around the rich silt that the Nile carried north to her banks, providing a way of living as the cultivation of crops began to thrive. The delta in the north was the gate to the Mediterranean, allowing for trade and commerce. It was the delta of the mouth of the river that had the most prosperous and fertile land, the crown jewel of the Nile.1 Because of the Nile’s northern current, the southern kingdom is referred to as Upper Egypt and the northern kingdom as Lower Egypt. This soil allowed the people that lived in “Lower Egypt” to cultivate a civilization and accumulate wealth, making them as rich as the soil the Nile provided. It was this rich and beautiful land that Menes established the first dynasty of Egypt, uniting the Nile River valley’s Upper and Lower Egypt.

Around 3100 BCE, the “Horus” people of Upper Egypt in the south set out on an expedition north to face the “Set” people. These hawk people took their name from their patron god of kingship and the sky. According to Egyptian mythological tradition, Horus warred with the usurper god Set, his younger brother, for his inheritance. Horus was the god of the sky and of kingship with the head of a hawk, while the center of the cult of Set was centered in the north.2 Like the gods, the northern people set out to conquer what was rightfully theirs. Menes led the Horus people into battle as a powerful military figure against the Set people. Menes emerged victorious. He married the northern princess, Netihotpe, thereby legally binding the two lands and giving him rightful claim to having united the two kingdoms of Egypt.3

Menes turned out to be just as charismatic a political figure as he was a skilled and powerful general. He allowed the Northern people to keep their religious customs, including festivals celebrating Set. The gesture was welcomed as a sign from the gods that the southern people meant no harm to the northerners. They only meant to take their place as the rightful kings of a unified Egypt and establish discipline and order.4 To centralize the two kingdoms, Menes established a new city between the two kingdoms, founding the city of Memphis. By establishing a city in the floodplain of the Nile, the city grew prosperous with surpluses of food and a clear path to trade, advancing the civilization at the seat of the government.5 This city also became the place where the north and south could meet culturally. During the rule of Menes, the combined crown of Upper and Lower Egypt became the symbol of a unified Egypt, the white symbolic of Upper Egypt and the red of Lower Egypt.6 This symbolizes the establishment of the first dynasty in Egypt, making Menes the first pharaoh. By the time of his death, Menes had established a civilization that allowed Egyptians to continue to develop a complex social hierarchy, political system, commercial center, and powerful economy.7 In his death, Menes was granted two tombs, one at Theni, the capital in the north, and one at Memphis, the seat of unified Egypt.8

Egyptian scholars largely agree that the southern people of Upper Egypt conquered the northern people of Lower Egypt through military conquest.9 However, it is hard for scholars to distinguish the king and conqueror that united the kingdoms. Egyptian tradition holds that it was King Menes that unified the kingdoms. However, this unification occurred during the prehistoric period of Egyptian civilization, called the Pre-Dynastic Era. Therefore, there is no evidence that Menes was the conqueror of the Egyptian kingdoms. The most well-known surviving piece of evidence from the dawn of Egyptian civilization is the Palette of Narmer, pictured above.10 In this earliest depiction of pharaoh, a leader with the southern crown is pictured with a mace raised above his head, as he holds the king with the northern crown down.11 The image of Narmer is the dominant figure in the palette, declaring his victory over the ancient Egyptians. According to archaeological evidence, the era from which the palette was made corresponds with the time that the southern people conquered the northern people. This is evident, based on the movement of the art shifting to where parts of the body are in front view while others remain in side view. In the palette, Narmer’s chest is in front view, while the rest of his body is in side view. In addition, the main figure, Narmer, is showcased by his size in comparison to the rest of the figures, another development in art during this time period.12 The era that followed marked the flourishing of social and political hierarchy, a strong economy, and a powerful role in commerce.13

If Menes was the king that conquered, why is this palette named for Narmer? The answer is far from simple. It is Egyptian tradition that holds that the king that unified Egypt was named Menes. However, there are many historical debates about the name for the unification king and the date in which he united Egypt. Historians believe that it is possible that the king answered to both Menes and Narmer, but this explanation conflicts with archaeological findings near Thebes. The most popular theory is that Narmer led the military conquest of Lower Egypt, while his son, Menes, was the charismatic leader that united the cultures of the south and north, solidifying the unification through marriage. Through his marriage to Netihotpe, the heir to the southern kingdom, Menes became the king of the south legally, which is why he is held up as the unification king in tradition. Some say that Narmer and his son, Aha, took the title “Meni,” meaning “the established,” to consolidate the kingdoms. Aha is again mentioned as the name for the king of the Horus people. When the kingdom was united, historians speculate that he took the name Menes, to solidify his dynasty to include the Set people.14 But, because there is no written record of the dynasty of Menes, none of these explanations can be confirmed. In fact, it was Manetho under Ptolemy II Philadelphus who named Menes the earliest of the pharaohs. So, Menes remains as a legendary figure in Egyptian history.15

Despite historical and archaeological conflicts with legend, the influence of the unification of Upper and Lower Egypt is clear. No matter what the name of the king was, he unified Egypt and strengthened Egyptian civilization as a whole, becoming the first pharaoh. He established the seat of government at Memphis as a cultural, political, and economic center. Most importantly, he is an important cultural and traditional figure. He fulfilled the destiny of Horus and reclaimed the rightful place of the southern people. For these accomplishments, it is Menes that is recognized as the unification king.