Greek Fire: A Byzantine Weapon Lost to the Ages 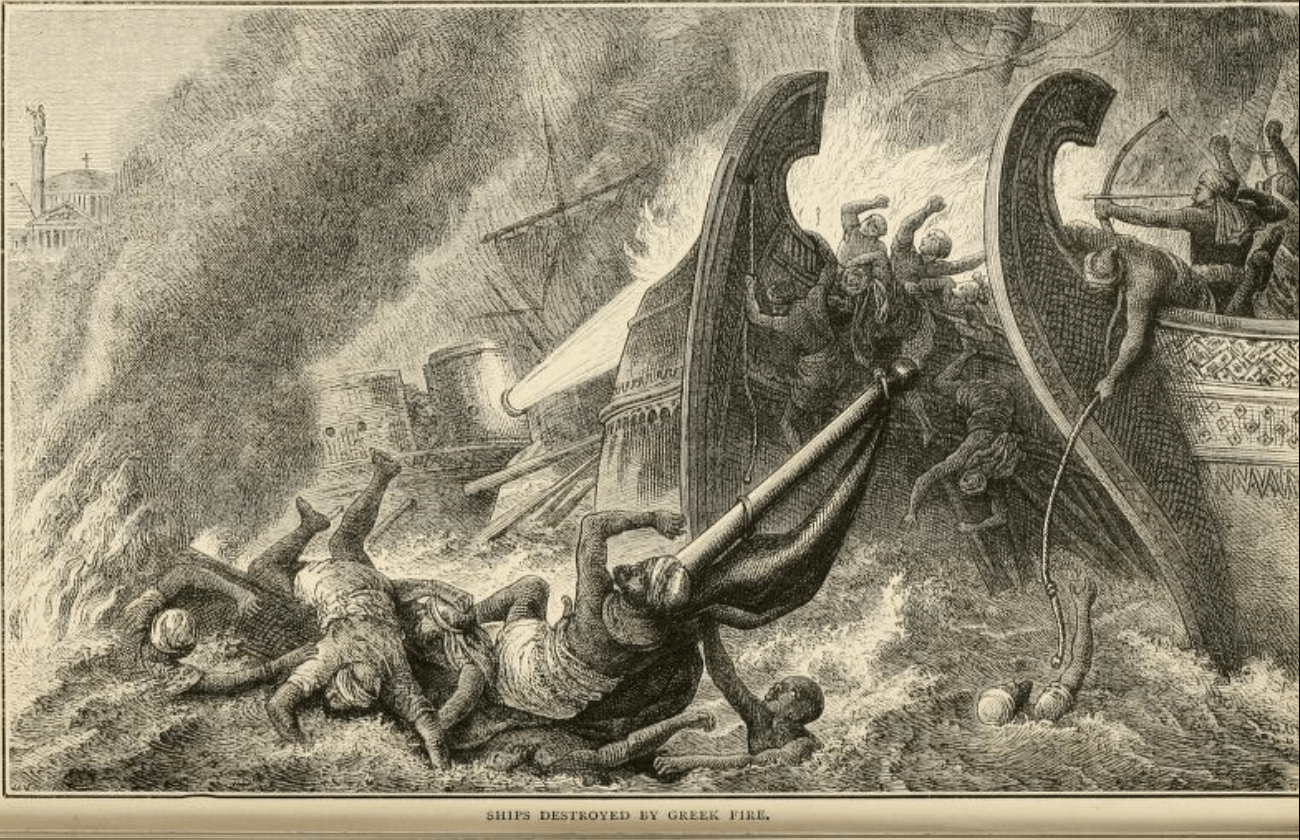 September 1, 718. With the clear motivation to defend Constantinople, Byzantine ships filled with anxious soldiers were surrounding the mainland. On the horizon, Arab Muslim forces, bringing with them a fleet of large and robust wooden ships, started to form a blockade. Slowly but surely, they advanced towards each other. Once the two mighty forces collided with each other, both sides swung their swords and flung their arrows. Not long after the battle began, the Byzantines ordered their reserved ship to sail to the front line. This ship carried something that would be the most destructive form of weaponry the world had even seen up to that point. Once the ship got close to the Arab fleet, the Byzantine soldiers scuttled around and turned on a nozzle fueled with Greek fire.

In the many years leading up to this battle, the Byzantine Empire, previously known as the eastern portion of the Roman Empire, and the Arab nations, united under the banner of Islam, had been engaged in constant warfare. This conflict was known as the Arab-Byzantine Wars, which lasted from 629 to 1050 CE. The rulers (also known as caliphs) of the Islamic Empire sought to expand outwards to spread the religion of Islam, and did so by invading northern Africa. From there, they took control of the Iberian Peninsula, threatening to overrun Western Europe. The Islamic Empire also desired to take control of Eastern Europe, which, of course, became problematic to the Byzantine Empire that dominated the northeastern Mediterranean. As a result, the Islamic Empire attempted to claim the wealthy capital of the Byzantine Empire, Constantinople. In the eyes of the Islamic conquerors, if they were able to take control of Constantinople, then they could easily topple the entire Byzantine Empire, and subsequently most of Europe. This conflict would lead to the First Arab Siege of Constantinople (674-678).1

After four years of bloodshed on the outskirts of Constantinople, the Byzantines were able to repel the Muslim army away from Anatolia by destroying their navy. Just two years after the Muslims’ defeat, the Islamic Empire underwent a civil war until 692. Between the years 695 and 717, the Byzantine Empire also fell into internal turmoil that led to eight emperors within twenty-two years. Under the leadership of the Umayyad caliphs, the Islamic Empire, seeing that the Byzantines were busy disputing among themselves, saw an opportunity to attack Constantinople again. Luckily for the Byzantines, they had a hunch that the Muslims would try to seize their beloved city, so they took the time to reinforce the city.2

By 717, Arab prince and general Maslamah ibn Abd al-Malik oversaw the Islamic Empire’s campaign to claim Constantinople and led his army straight for the capital. There, Maslamah tried to blockade the city with his navy, but this gave the prepared Byzantines an opportunity to unleash their secret weapon.3

The fire that was spout out from this hose started to incinerate the entire Arabs’ fleet. The Muslim soldiers started to throw buckets of water to subdue the flames but quickly realized that this was not regular fire. This was a special kind of fire that could not be put out with water. Seeing as how stopping the fire was futile, the soldiers quickly took off their cumbersome armor and leaped out into the water while the ones that stayed got lit on fire. Some unlucky soldiers who impulsively jumped overboard were still wearing their full set of armor and as a result, immediately drowned to the bottom of the sea. The fire that had been burning the ship started to spread out onto the water as if it was gasoline. These flames stretched out and the surrounding ships were also caught on fire. Some of the soldiers tried to swim away frantically, for the fire floated across the sea and burned those that were closest. From a distance, the surviving Muslim soldiers were witnessing their own comrades burning, screaming in agony from the top of their scorched lungs. No matter what they did, there was nothing that could be done to put out the flames that were covering their melting bodies. Even some of the spectating Byzantine soldiers shivered at the thought of being burnt alive while being completely surrounded by water. Once the Arabs realized that a significant portion of their ships had been engulfed in flames, they signaled a retreat. As the Arabs fled the scene to lick their wounds, the Byzantine soldiers cheered with victory.4

After Maslamah called off the blockade, the Muslims attempted to regroup outside Anatolia and wait for more of their men and supplies to arrive. Unfortunately for the Muslims, the Byzantines captured their reinforcements, so the Arabs had no choice but to travel back to Syria in defeat. With the help of Greek fire, the Byzantines were able to prevent the Islamic Empire from conquering Constantinople, as well as most of Europe. The Byzantines would continue to be the sole inhabitants of Constantinople until the Ottoman Empire finished them off in 1453.5

To understand the significance of Greek fire, it is important to have already mentioned the background to these Byzantine and Arab conflicts. But what exactly was this Greek Fire? How did it come about?

While the origin of Greek fire is not entirely known, it is widely believed that the creation of this destructive weapon came from a man named Callinicus, an architect who left Syria to seek refuge in Constantinople. After experimenting with several chemicals, he eventually created what is now known as Greek fire, a mixture that, when exposed to air, would spontaneously erupt into flames. Callinicus guarded the recipe extremely well, as only the Byzantine emperor and Callinicus’ family, the manufacturers, knew the exact ingredients used.6 It should be noted that during this time, the Byzantines saw themselves as Romans, prompting them to call this weapon ‘liquid fire’ or ‘marine fire.’ As for its physical appearance, it was said to have been a ‘wet dark liquid’ that most likely contained oil.7 According to twelfth-century Byzantine scholar Marcus Graecis, the ingredients used in Greek fire contained pure sulfur, salt, petroleum, Persian gum, pitch, pine resin, and dissolved nitre.8 As vague as it may seem, this is the closest we have to knowing the contents of Greek fire.

What made Greek fire so unique was its ability to burn on water, even when submerged. Obviously, this kind of fire could not be put out with water. Instead, some of the most common substances used that could put out Greek fire were sand and urine.9 This flammable weapon was shot out of a grand siphon, which was essentially a bent tube. This siphon would act as a propellant that would launch the fire outwards onto the target. Because of this, the fire was able to spray out at considerably far distances. This method proved to be successful and effective, as it brought devastation against its enemies and rarely backfired on its user.10

Apart from being sprayed out of a siphon, there were other methods to firing Greek fire, such as flinging them from catapults and throwing pots fueled with fire that acted as hand grenades that could explode on impact.11 The usage of Greek fire was not exclusive to sea warfare. It was also used on land, and the way it worked was similar to modern-day flamethrowers. The fire would be carried with handheld pumps, and to spray them, they used small flames at the nozzle to have the liquid set on fire. It worked just as effectively on land as it did at sea, with the exception of its small supply of the liquid.12

Greek fire was also shown to have a psychological impact on its victims. When it was used against Russian invaders in 941, the soldiers in full armor would rather drown at sea than be burned alive. Often times, the fumes that came out of the fire would cloud the area to the point where the sky darkened to night.13 The foreign invaders that witnessed this were shocked in fear. Russian survivors that made it back to their homeland told their kinsfolk that the Byzantines attacked them with “lightning from heaven.” The thought of being burnt alive with a seemingly invincible fire heavily traumatized both the Muslims and the Russians. Eventually, as gunpowder and cannons became more common in warfare, Greek fire became less of a surprise to future invaders like the Ottomans.14

As overpowered as Greek fire may have seen, it had its share of weaknesses. First of all, as mentioned earlier, while water was powerless to stop the fire, certain substances like sand and urine were able to put out the fire. Secondly, the fire was not effective during an open battle, since the enemies could easily dodge and move around the flames. Also, since production of the fire was kept secret, it was only used a handful of times. This was to lessen the chance of their enemies grabbing hold of the weapon and using it against them. The Byzantines wanted to make absolutely sure that they themselves would be the only manufacturers of Greek fire.15

Ultimately, because the process for making Greek fire was never written down and was kept extremely secretive, the weapon ceased to exist by the time the Ottoman Empire finally conquered Constantinople in 1453. Muslims did attempt to replicate Greek fire and did create their own version, but their fire was significantly weaker and for the most part only used on land.16 Despite the many attempts that people have tried to perfectly recreate Greek fire over the centuries, none have ever been successful. It is truly ironic how today, when we have nuclear weapons, lasers, drones, and high-tech weaponry all at our fingertips, we do not (and may never) have the knowledge and ability to precisely recreate the Byzantines’ best arsenal weapon: Greek fire.