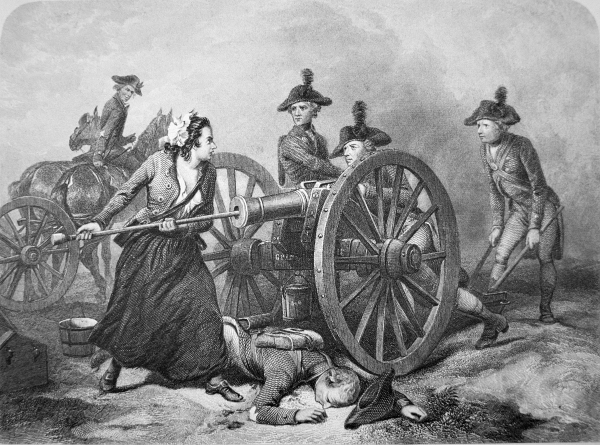 Cannons roared alongside the battle cries of men. The clearing was filled with the sting of fighting. As men collided with one another, women ran fast from the clear stream nearby. Bringing water to the men was an arduous, but crucial, part of the battle. One woman had filled her bowl and was walking quickly towards her husband who had just fired another cannon ball at the British line. She listened to the fighting taking place in the clearing, winching at the yelling and screams. Looking up, the bowl of water fell from her hands as she watched her husband crumble to the ground. Picking up the hem of her dress, she sprinted towards him. Collapsing onto her knees, she gently pulled his head into her lap, stroking his hair and caressing his face. She whispered reassuring words to him, but as she watched him and heard the battle persist without thought to her dying husband, anger bubbled inside her. The anger engulfed her with the need to do something, anything. Laying down her husband’s head softly, she walked to the cannon with resolve. She fired the cannon, making it roar with the sound of liberty. Molly Pitcher was a woman who was seen firing a cannon in place of her wounded husband during the Battle of Monmouth. Through her brave act, many have been influenced by her actions.

The Revolution War took many men and did not ignore the women. Women in the war tended to the men, be it camp followers or wives of the soldiers. Such was the case with Molly Pitcher. 1 Many men’s wives followed their husbands into the fighting because it was not safe for the wives to be left alone as the war raged on. Many of the camp followers and wives became water bearers, devoted to bringing water to the soldiers on the battlefield. Many of these women had seen how different weapons and cannons were fired over time because they were around artillerymen the majority of their time. The rare experience of a woman taking over the cannon for her fallen husband was detailed by a soldier and a field doctor that observed the account. Mary Ludwig Hays, or better known as Molly Pitcher of the Battle of Monmouth, was married to her husband who was placed on cannon during the battle. Her husband was then wounded, and she took his place. Her brave action has influenced many women to take action in their lives.

Many women today idolize Molly Pitcher as a role model for women’s empowerment. The Molly Pitcher Project was created in 2013 by four students at the University of Virginia Law School to promote women in combat situations. This project helped with the opening of combat MOs for women who desire to be involved in combat.2 The first woman who completed the project is now an infantry officer among the Army Rangers. This moment was historic for women in the military as well as for young girls who now have a strong woman figure to look up to. Molly Pitcher has become a symbol of power and strength for women and has changed expectations.

Before leaving the battlefield, Pitcher looked over the field one last time and made her way towards her husband. Smoothing his sweaty hair down, she talked to him about how she fired the cannon for him. He smiled up at her face as it mirrored his. Through Molly Pitcher’s bravery and valor, we have a valued piece of history. Women have modeled such actions and courage after her; women were given the power to take on roles in the military, and then partake in combat. Molly Pitcher was a truly brave woman, through her actions women today have a symbol for our own bravery.

Interesting article and sad at the same time. Witnessing her husband’s injury and probably death is shocking and the thought of her taking his place is very inspiring. However, I don’t know how to feel about Mary Pitcher. I’ve heard conflicting accounts of her not even existing and her story was fabricated to promote women to take roles in the military. Thus, even if she didn’t exist, this story serves the same purpose. True or false, it still did the same job of inspiring women to fight.

In all my years of taking a history class, I have not heard of a woman named Molly Pitcher and what she did exactly. However, after reading this article I wish that I had the privilege of knowing who she was and what an important woman she was to society at the time. This woman had also represented the early stages of a symbol for woman empowerment. This was such an interesting read and well written, such a great job!

I really loved reading this article. I feel like she serves as an inspiring and empowering role model for women. I personally loved the way this article was written because I felt like it gave a good overall insight to the time period and situations of the time that made Molly stand out as a symbol of strength. I must admit though, it’s a bit discerning for me that not a lot of people know about her.

Molly Pitcher is an inspiring person in history that I have never heard of until this article. The American Revolution was a scary time for this country, what with the destructive weapons that couldn’t aim quite right. Instead of following normal human reactions, Molly didn’t stop to grieve at the death of her betrothed. She stepped in his place and finished the job. Great read.

Molly Pitcher is an inspiring woman. She didn’t mourn for her beloved like most would but instead stepped into his role that makes others do a double take. For a woman to do this is impressive. I believe she is a top role model for women during the American Revolution. The American Revolution was a tough time for everyone. Molly’s care for her husband afterwards is admiring as she comforts him during his wounded state.

The imagery used in this article is really amazing and well used. I felt the emotions that Molly Pitcher must have felt and that is rare to feel in such a short paragraph. This article is very well written, the transitions between each paragraph is fluent and goes easily into the next topic. The story that is told is amazing and sad at the same time. To see your husband die as you try to help others is horrible but it was amazing what this woman did. Taking her husbands place because she knew she needed to avenge his death is an act that shouldn’t go unnoticed.

This article was very interesting as I have never heard of Molly Pitcher and her impact during the American Revolution. It is really impressive as she stood out in her husbands place and took control of the situation. She was able to react quickly and without hesitation as she immediately fired the cannon. She is and was definitely an inspiration to a lot of women as it shows that women can be useful and can do what men do.

The story of Molly Pitcher is one that is taught in almost every sixth-grade history class. So from a young age girl have the opportunity to hear the story of a brave woman who took the place of her husband in fighting for their country. As it is stated many times in this, article Molly Pitcher was an influencer of women not only from her time but even into the present day. She made it known that no matter the rules women are capable of so much more than what the confine of a government allows them to do.

I remember learning about Molly Pitcher when I was kid in elementary school, so this article really refreshed my memory regarding her courage in the face of battle. While reading this article, I first thought that Molly Pitcher’s husband had died when she took over the cannon for him. I was relieved when I read at the end of the article that he looked up at her and revealed that he was proud of her actions.

Molly is one of the most inspirational women in history. She wasn’t afraid of the big fights and giant cannons going on around her. She knew that someone needed to fire the cannons so she stepped in and helped out. Even with her husband dying she still fought on.