Beauty on the Battlefield: Viking Women in Combat 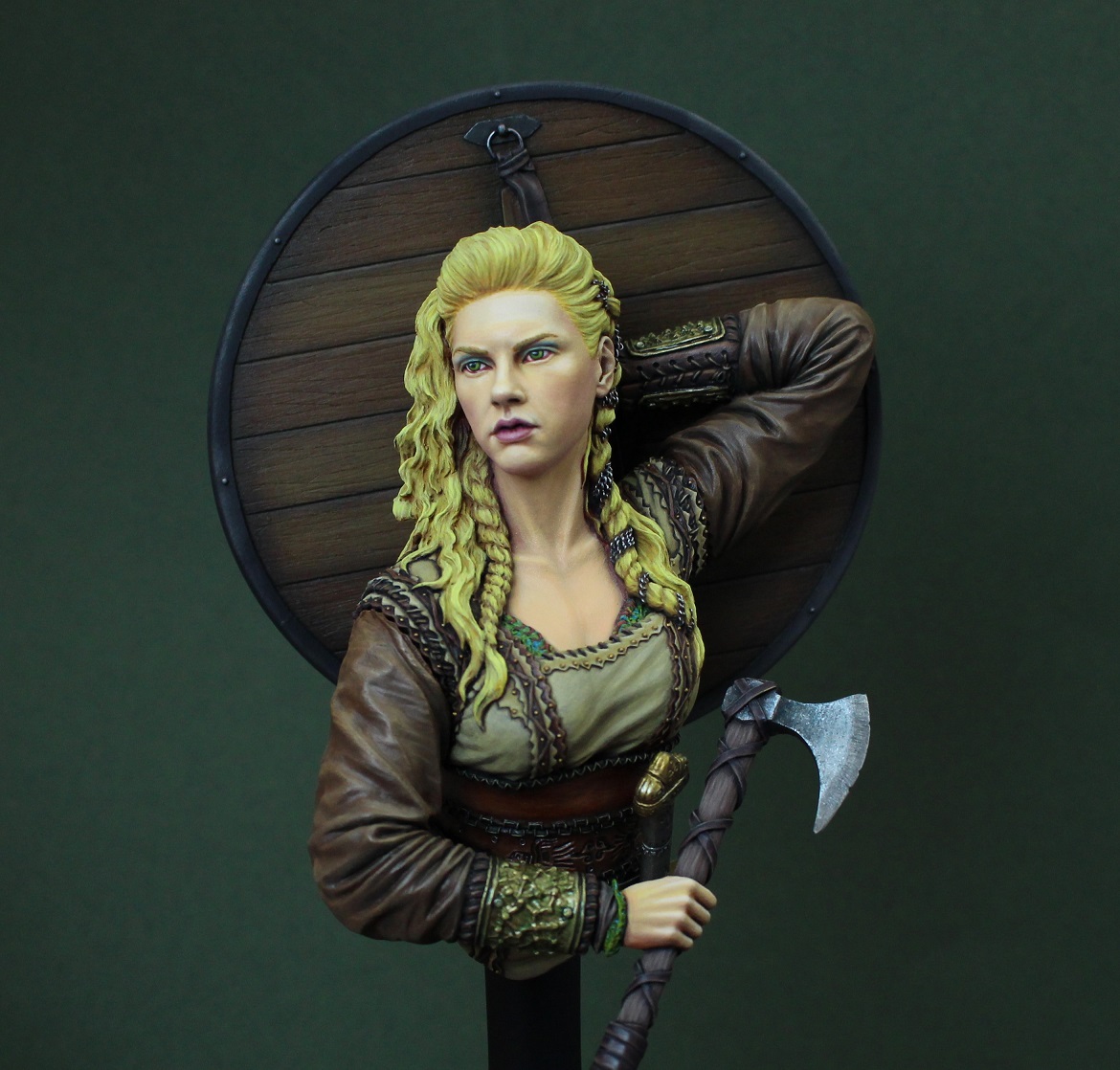 Fierce Viking Age warriors rampaged, warred, and plundered throughout northern Europe and the northern Atlantic from the ninth until the eleventh century. Until recently most scholars assumed Viking military forces were entirely male. However, this is an inaccurate over-generalization as new evidence suggests that female warriors were included on the battlefield. Twenty-first century archaeological technology and DNA testing expanded available information to provide crucial missing pieces to the fabric of history. Vikings recognized women who fought and died beside their brothers-in-arms.

During the Viking Age, Scandinavia was not one politically cohesive area but its people did share religious beliefs, domestic lifestyle, trade, and warfare tactics. Viking life was harsh compared to other societies at the time. There is no evidence of large-scale sophisticated cities. Instead the region’s people settled into relatively isolated farming communities and trading posts, as the geography allowed.1 These conditions made land a valuable commodity, and, at times, men and women raided beyond their homelands to obtain it. Long winters and arduous terrain limited the Vikings’ agricultural cultivation opportunities. If a community was to thrive, every able-bodied person would have been required to work what fertile farmland could be found.

Possibly due to this dynamic, Viking women held higher social and legal statuses compared to women in many simultaneous societies worldwide. Women could initiate divorce and independently own property.2 Instead of a simple divide between male and female genders, “the fault line runs between the able-bodied men and exceptional women on one hand and, on the other, a kind of rainbow coalition of everyone else (most women, children, slaves, and old, disabled, or otherwise disenfranchised men).”3 Capable women received equal treatment to that of men, which could have included training with weapons and in battlefield tactics. These skills would have been valuable in raids, which were a common Viking practice. In fact, a Viking’s personal wealth was generally amassed through foreign raids, which were organized by private individuals who could afford to do so. Thus, displays of foreign-acquired wealth were the primary status symbols in Viking society.

One such status symbol, a large, natural stone was acquired by a Viking woman who later commissioned it as a runestone grave marker for her husband.4 The stone was erected in the farmlands of Alstad, Norway with the inscription “Jorunn raised this stone after…, who had her to wife and [she] brought [it, i.e. the stone] from Ringerike, out of Ulvoya. And the stone shall honor them both.”5 Ulvoya is an island located over one hundred kilometers Southwest of Alstad. The logistics required to traffic a large stone over the water and over a large distance of mountainous land suggests that the stone was a prized acquisition, possibly a conquest trophy. Runestone grave markers were not a common practice in Viking Era Norway, and only thirty-eight runestones are archived within its modern borders.6 The female commissioner of the Alstad Stone made a point to commemorate how she obtained and transported the stone from elsewhere. The stone’s acquisition, and the owner’s financial ability to commission the uncommon memorial, indicates that she was a wealthy woman. With this runestone, the widow Jurunn simultaneously honored both her husband’s memory and her own conquests.

In addition to transportable wealth, Viking warriors claimed land as spoils of war. The Vikings established modern-day Iceland’s first colonies. However, the Vikings who colonized the island could not have known the land mass was unsettled, and they must have been prepared to suppress a local population by military force.  Written records indicate that the first colony in Iceland had four hundred original land claimants, thirteen of whom were women. This number does not include women who were listed under their husbands’ or brothers’ names on land claims.  These thirteen women were listed independently from any man.7 This fact indicates that there were women included on this voyage who were prepared to fight side by side with the men and that these women took their share of the plunder in land claims.

Further evidence of female warriors was discovered in Repton, England. The Anglo-Saxon Chronicles record that a great Viking army occupied the parish Repton in 873-74 A.D. and assumed complete authority over the land. A 1980s Repton excavation of the church discovered a mass burial mound that contained bones of at least 264 Vikings. Close examinations of left femur and mandible sizes compared with approximate biological age demonstrate up to twenty percent of remains were female. The mass graves contained Viking burial goods, and the skeletal remains frequently show signs of violent injuries.8 It is reasonable to conclude these men and women fought and died together. Bodies of Viking warriors slain in battle were afforded the honor of burial even on foreign soil. “The bodies of their own dead, which must be left behind, the Scandinavians carefully buried upon the field of battle; but they displayed their scorn and contempt for the vanquished enemy by leaving the dead comrades of the latter unburied where they fell”.9 These Viking burial rights on foreign soil preserved the battlefield aftermath and provide additional historical context into who fought and died.

The Rempton excavation analyzed Viking remains utilizing multiple twenty-first century technologies.  Prior to these developments scholars generally determined gender based on grave goods. If an individual was buried with weapons or agricultural equipment, the remains were male. Conversely, if an individual was buried alongside domestic objects, such as keys or jewelry metal brooches, scientists believed the grave held female remains.10 However, more recent excavations revealed the capability for a woman to be buried with military weapons.

The most prominent example to date comes from the coastal trading post of modern day Birka, Sweden which upended the very core of academic Viking Era knowledge. There are 3,000 graves in proximity to Birka, over 1,100 have been excavated to various degrees; but one grave, designated Bj 581, held the power and evidence to solidify what was previously only speculation and educated guesswork.11 “The grave goods include a sword, an axe, a spear, armour-piercing arrows, a battle knife, two shields, and two horses, one mare and one stallion; thus, the complete equipment of a professional warrior.”12

DNA samples were extracted from a canine and femur bone of Bj 581’s human remains and processed at the Archaeological Research Laboratory, Stockholm University. Genome-wide sequence data was produced to provide better insight into who was buried. Mitochondrial DNA was isolated, and the results of sex chromosomes analysis concluded “…that Bj 581 was a female”.13 Additionally, analysis performed on extracted molars were compared against other Birka graves attributed to the same time period and tested for possible geographical origins. “The strontium isotope values in three teeth could suggest mobility in her early years. The Sr ratio falls outside of the local baseline for the established Birka population, suggesting that this individual moved there later in life.”14

Bj 581’s test results have cultural and historical implications of a far-traveled Viking era woman buried with traditional warrior grave goods. Multiple weapons included with the rare presence of horses is generally agreed as indicative to a high-ranked warrior. Twenty-first century research has confirmed this military grave belonged to a woman, it is necessary to rethink what is Viking Age common knowledge and the period’s gender roles.15 There is now genetic proof of at least one Viking Age woman warrior buried with high military distinction. Bj 581’s existence adds to the probability that other Viking Age women were participated directly in combat.

The two hundred year Viking Age was a unique period in history. An individual’s worth and status were determined by contribution and ability, not solely predetermined by biological gender. For the warlike Vikings, if a woman had the ability and inclination to bare a sword and fight alongside men, she may have been afforded the opportunity to do so. The Viking woman warrior has carved her place in history, and our historical perspectives must be adjusted to correctly include women into what constitutes a Viking warrior. These brave women earned a place within their society and our military history, and we need to recognize what it was.

I am a Communication Studies major with a minor in History. My passion falls with research and I love to share new found knowledge with others. I am a military veteran, mother of four great kids, and coffee connoisseur.