Peter the Great: The Man who Westernized Russia 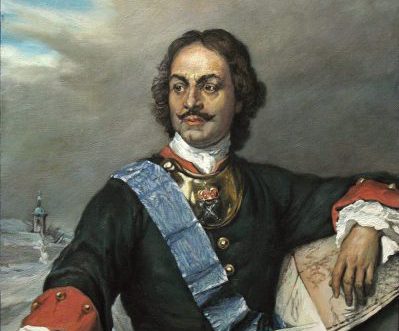 Russian historian Nikolai Pogodin once said, “The Russia of today, that is to say, European Russia, diplomatic, political, military, commercial, industrial, scholastic, literary—is the creation of Peter the Great. Everywhere we look, we encounter this colossal figure, who casts a long shadow over our entire past.”1 Peter I, also known as Peter the Great, was the tsar and emperor of Russia from 1682 to 1725. He played a crucial role in westernizing Russia by changing its economy, government, culture, and religious affairs.2 By doing all of this, Russia was able to expand and become one of the most powerful countries in the eastern hemisphere.

Peter Alexeyevich was born in 1672 and was the son of Tsar Alexei Milhailovich of Russia. At the age of ten, Peter and his half-brother Ivan V both shared the title of tsar after their father had passed away. When Ivan died in 1686, Peter became the single ruler of Russia. Around this time, he began taking great interest in sailing, meeting foreigners, and military command.3 In 1695, Peter fought against the Turks, and after seeing how weak his own navy was, he sent several of his people to European maritime powers to study shipbuilding and navigation. Just two years later, Peter himself traveled around Europe, learning about Europe’s customs, military, religion, and economy. Fascinated with the foreign customs he encountered, he returned to Russia and implemented aspects of European culture into his own country.4

Upon returning to Russia, Peter began enforcing changes to break away from old Russian traditions. He ordered all of the men in the country to shave off their beards, forcing anyone who kept their beards to pay an extra tax. The old Russian calendar was replaced with the Julian calendar that the rest of Europe had adopted.5 Even Peter’s portraits were decorated with western imagery, drawing inspiration from the Romans in its allegory to emphasize his strength and power. Peter also established a new government hierarchy, allowing lower class citizens to rise in rank and become nobles. Whenever Peter was away from Russia, he would have a senate that he appointed to oversee all judicial and administrative functions. The person in charge of the senate was given the title “ober-procurator,” and was a direct agent of the tsar. In 1717, Peter created several branches in the government that specialized in managing the country’s economy, navy, and foreign affairs.6 Additionally, Peter came up with a more simplified alphabet so it would be easier to learn to read the Russian language. The new alphabet, called civil script, was used in printing out secular works for the public.7

Peter’s military conquests were also beneficial to Russia. In 1700, he waged war on Sweden in order to control the Baltic Sea. Despite some minor losses, Peter managed to best Sweden by triumphantly defending Russia against King Charles XII’s Swedish army and capturing critical Swedish ports in the Baltic Sea. The Treaty of Nystadt in 1721  gave Russia official control of several regions around the Baltic Sea, including Livonia, Ingria, and Estonia. As a result, Peter was awarded the titles Emperor, the Great, and Father of the Fatherland. Just a year later, Peter started a campaign against Persia, and he successfully held control of the ports in Baku and Derbent in the Caspian Sea. Intensive recruitment, home produced weapons, organized supplies, and having foreign officers as trainers all contributed to Russia’s military success. Having a peasant population that was willing to serve, a harsh climate, and a heavily fortified navy almost seemed to make Russia invincible.8

Starting in 1712, St. Petersburg became the capital of Russia. Peter used the city to construct palaces, churches, and government buildings in western European fashion. Its naval academy, Peter’s most successful technical school, was taught by British instructors. The city was provided with street lighting, and the Chief of Police supervised the public welfare. As part of Peter’s policy, all of the townspeople were required to wear European fashioned clothes. Peter’s reasoning for these changes can be summed up in his own words: “Even though something may be good, if it is new our people will not do it.”9 Peter did not hesitate to use force when necessary to enforce these changes. He was very strict, and both peasants and nobles worked tirelessly in their daily lives. Not only was it mandatory for parents to teach their sons about service to the country, but it was also expected for citizens to work their entire adult lives.10

All of these sudden cultural changes led to controversy within the nation. Some religious traditionalists saw Peter as a sort of Antichrist, and there were several occurrences of revolt during his reign. For example, Peter’s son, Alexei Petrovich, was charged with treason for trying to assassinate his father; he and many of his co-conspirators were executed as a result.11 While Peter had many critics, his contributions to Russia greatly outweighed any negative effects.

Peter continued to cultivate Russia until his death in 1725.12 All in all, Peter the Great’s reign saw dramatic changes in Russia and helped make it into a wealthier and powerful country. In the end, Peter the Great had brought cultural revolution to Russia, sowing the seeds for the modern Russia that we know today.