Please….Call me Marilyn: A peak into the looking-glass of Marilyn Monroe 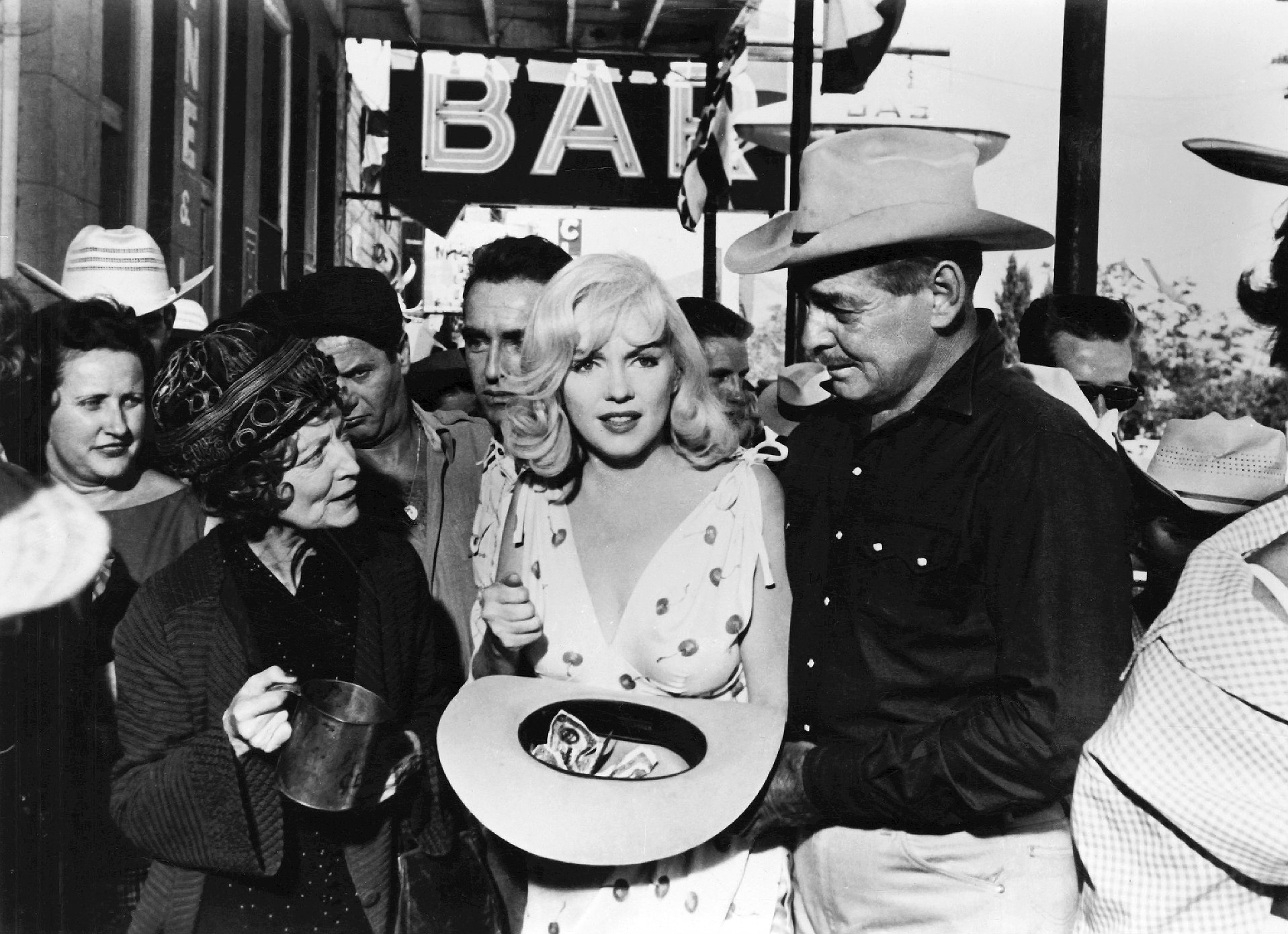 Dear Diary: I’ve always been afraid of bees. Now I’m dreaming about them! Great big bumblebees with furry backs. I’m sure they are symbols for something and I am persevering to understand. They flew in a squadron across a meadow. I was hiding in the goldenrod, my feet bound in yellow silk like a Chinese whore’s.1

Her family knew her as Norma Jean Mortenson, a classic hometown girl born on June 1, 1926 in Los Angeles, California, but the world knew her by another name. Perhaps you’ve heard of her: Miss Marilyn Monroe. Never having known her father, Norma Jean was forced to grow up so that she could overcome the obstacles of living in an unstable household. Her mother, Gladys Baker, was incapable of taking care of Norma Jean due to her development of psychiatric problems that resulted in her admission into a mental institution. Unfortunately, this meant that her daughter would have to spend most of her childhood locked up in the confines of the American foster care system battling the inability to enjoy normal childhood experiences and defending herself against countless episodes of sexual assault. For Norma, there was really only one option for her to escape the tortures of her childhood. For this reason, at the age of sixteen, she got married to then-boyfriend Jimmy Dougherty on June 19, 1942. As a merchant marine, Dougherty was sent overseas, and to compensate for the absence of her new husband, Norma found employment as a worker in a nearby factory in Van Nuys, California. Little did she know that this decision would be the one that would change her life forever. While on the job, she managed to earn the attention of David Conover, a photographer sent to the factory by famed actor and army veteran, later President Ronald Reagan, who instructed Conover to capture images of “Women in War Work.” The publication of those pictures in the June 1945 issue of Yank Magazine served as the stepping stone for a life that not even Norma was unsure would play out in her favor; but given the lack of better alternatives, it was a step that she was more than willing to take. Luckily for her, the pictures proved to be a smashing success, and with that newfound fame, she colored her hair platinum blonde and changed her name to Marilyn Monroe.

With a change in direction came new changes in her life, and by the mid-1950’s Marilyn had rose to stardom, tackling top blockbuster films and capturing the attention and hearts of every man, woman, and child in America. In a 1973 biographical profile entitled Marilyn published by American Novelist, Norman Mailer, he depicted the blonde bombshell as being, on one hand, an “angel of sex,” while still possessing the abilities of being “gorgeous, forgiving, humorous, compliant and tender.” He continued by describing her as being an “angel of cinema” and a “presence” on stage.2 It is no surprise that like thousands of other Americans, Mailer was captured by the phenomenon that was Marilyn Monroe. Her charm and iconic good looks served as a distinctive perception of American ideals during this time, and Marilyn was well aware of the gravity of her impact in modeling and performing on the big screen. This is shown in how she often quotes that she “had belonged to the public and to the world” and “had never belonged to anyone else.”3 This realization of what her fame and recognition had brought her imposed a realization that with these opportunities came compromises, those of which would begin to take a serious toll on the American Sweetheart later in her career.

Due to her rapid increase in stardom, Monroe was persuaded to adapt to the changes that came with the life of a popular cultural icon and by doing so she decided to leave her past behind, divorcing her husband, and marrying baseball star Joe DiMaggio in 1954. While her fame came as a bit of a surprise, Monroe made it a priority to ensure that she did not neglect her priorities, and so she contributed as her part to the war effort, by volunteering at the United Service Organization, providing entertainment for soldiers overseas in Korea.4

In doing so, not only did her actions help to build her image, but it helped to showcase her numerous talents, which later proved useful in securing her a role in numerous films and magazine publications upon her return. She showcased her talents in movies such as Monkey Business, Gentlemen Prefer Blondes and How to Marry a Millionaire as well as the opportunity to grace the cover of Playboy magazine.5 Her involvement in the war guaranteed Monroe the opportunities that she had always dreamed about. Her identity remained conflicted between two different personas, “Monroe as a Celebrity,” with her famous blonde hair and hourglass figure, and “Monroe as the All-American Girl Back Home,” cherishing her fond memories of sweethearts, sisters, mothers, home-cooked meals, and any number of personal memories of life as a civilian.6 This battle between who she was portrayed to be and who she actually was proved to create quite a challenge for Monroe, who kept battling the need to be closer to who she actually wanted to be. Her instantaneous rise to stardom left Monroe in a position of complete loss and loneliness. An excerpt of Marilyn Monroe’s diary, from the period of shooting the iconic subway scene in Monkey Business, reveals her conflicting emotions during the height of her career, stating that,

I hate the way the bellboys walk by me, speaking in muffled tones. Sometimes I appear in the antique wooden mirror in the lobby: a maid, cleaning the glass in slow circles, notices a sad blonde in the reflection. Turning, she sees no one is there. Late at night in the hallways.7

While Marilyn tried to portray the lovable and beautiful woman that her fame endorsed, deep inside she was battling emotions that were quite the contrary to her character.

Due to this constant battle of emotions, Marilyn Monroe was forced to resort to various medications to control her frequent episodes of insomnia, depression, and bipolar disorder. Due to her constant traveling and increase in fame, Marilyn developed psychological conditions that deprived her of portraying the star that she was expected to be. For this reason, towards the end of her career, it was discovered that she had been prescribed drugs such as barbiturates, psychoactive drugs, and amphetamine to help her combat and control her condition. Unfortunately, on August 5, 1962, Marilyn Monroe was found dead in her home in Brentwood, Los Angeles, California. Later, toxicology reports had revealed that she had passed away from a drug overdose brought on by the consumption of barbiturates that had been prescribed to her mixed with lethal concentrations of other drugs such as pentobarbital and chloral hydrate.8 All these drugs mixed, creating a cocktail that would lead to the unfortunate death of one of America’s favorite superstars. While the circumstances of her death may still be up for debate, it is clear that the result of this case was no more than another tragic story of another Hollywood star who was overwhelmed by the realities of fame and fortune and took it upon herself to come up with a solution to rid her problems from the world.

Marilyn Monroe is one of the most iconic women in American History, but her story is almost forgotten. Even though she may be considered one of the most photographed women ever, having both her personal and professional life turned into a highly dramatic narrative over the period of her career, her life as an adored and idolized superstar proved to be nothing but a rollercoaster, transforming her dreams of being a successful Hollywood star and escaping her childhood misfortunes into living a lie that was worse than she had imagined. While Marilyn Monroe remains an important figure in the eyes of the American public, it is important to note that her success came at a great expense, costing her her life and her happiness. A simple girl from Los Angeles California had the dreams of making it big in Hollywood, living the life of the rich and famous, but little did she know that the place she had always fantasized would be the farthest thing from what she had imagined. This was the story of that simple “All-American Home Girl” Norma Jean, but the world would rather call her by her true name, Miss Marilyn Monroe.