The Pirates of Texas: The Legend of Jean Lafitte 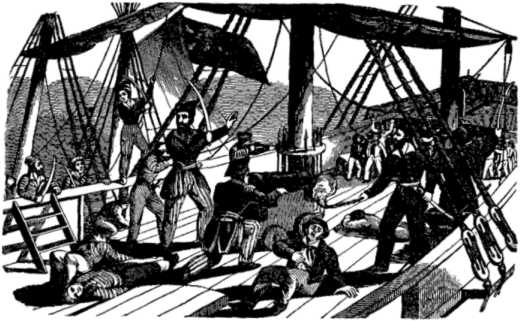 Pirates have captured the imaginations of entire generations. The word is almost synonymous with thieves, pillagers, rogues, and scalawags. Soldiers, volunteers, and even patriots are words that would never come to mind when describing a pirate, yet these are the words used to describe Jean Lafitte and his men, the Batarians, notorious pirates of Louisiana and Texas, and heroes of the War of 1812.

Little is known of Lafitte’s life before he became an outlaw. Multiple tales of his origins exist, some originating from Lafitte himself. It is believed that he and his twin brother Pierre were born and raised in the village of Bajes, a small country lying on the border of France in 1782.1 Other historians believe he could have grown up in Spain, or one of the French territories as well.

Lafitte grew up the youngest of three boys and raised by his grandmother. He is believed to have gone to school in the Caribbean, and trained in military lifestyle while residing in St. Christopher Island.2 He is said to have been tall, handsome, well mannered, literate, and fluent in French, Italian, Spanish, and English. He is also believed to have been from Jewish descent, having credited his Jewish grandmother for one of his victories in a personal memoir.

No one knows what his life was like prior to his journey to the Americas, or his exact motivation for his pilgrimage. One common belief is that at one time he served in the French army under none other than Napoleon Bonaparte himself. Others say he came from a long line of French aristocrats who fled the country amidst the French Revolution after his parents were executed. It is also believed that he originated from Spain and left to escape religious persecution during a time when the country was strictly enforcing the Catholic faith, and exiling or killing Jewish citizens.3

The true story of Jean Lafitte began after moving to New Orleans in the year 1800 with his brother Pierre, prior to fleeing Santa Domingo, Haiti while fleeing from a slave rebellion. The Lafitte brothers made port in the city and opened up a blacksmith shop, which soon served as the cover front of their smuggling operation. Pierre was a merchant and handled the goods that Jean brought back to the mainland. It was Jean Lafitte who took to the seas leading his men as they pillaged and plundered countless ships, stealing cargo to be sold through the black market.4

In no time at all the Lafitte brothers had formed a vast and complex smuggling network of pirates and operatives. They soon began operating out of their new headquarters on Grand Terre Island, a mere fifty miles away from New Orleans, where they housed over fifty ships with anywhere from five to ten thousand men, given the name Batistas after Bataria, which resided so closely to their hideout.

Jean Lafitte never referred to himself as a pirate, always insisting he was a privateer, even though he did not actually possess a privateer’s licence. He firmly believed that his only crime was that of smuggling, and he was viewed by many almost as a hero. Due to the ban on exports at the time, resources were scarce, and were taxed heavily. Lafitte offered the resources he stole to citizens at discounted prices, clothes, tools, and food to people at discounted prices, making clothes, tools, and food easier for them to acquire. Many times law enforcement were willing to turn a blind eye towards him and his operation. Lafitte also dealt in the slave trade, since new laws put in place had made the selling and transporting of slaves increasingly difficult.5

Lafitte evaded arrest many times. Only once, in 1812, were he, his brother, and several of his men captured and arrested. This was merely a temporary defeat, however, for they each escaped shortly after the bail was posted.6

While he was plundering the coasts of New Orleans, the rest of the country was engulfed in the War of 1812. British forces approached Lafitte to make him an offer. In exchange for his aid in attacking New Orleans, the British were prepared to offer him $30,000 and a pardon for all of his crimes, as well as making him a captain in the Royal navy. Lafitte refused and reported this offer to the Governor of New Orleans. This act was met with treachery, however, as the navy soon came down on Grand Terre Island. Believing they came in good faith, Lafitte did not order his men to take up defense positions. Lafitte’s empire came crashing down as the navy destroyed his base, confiscated his loot, and had his men arrested and charged with piracy. Only Lafitte and a few of his men were able to escape by hiding in the bayou, where they remained for nearly two months.7

Lafitte offered his assistance to the United States once again, this time to General Andrew Jackson. Jackson at first was somewhat reluctant to trust the famous pirate, but knew he needed his resources and knowledge of the terrain. Jackson commanded an army of soldiers, pirates, and privateers against British forces. One of the most famous battles during this time was the Battle of New Orleans. Jackson led his army of only four thousand men against the British whose ranks were more than double that of Jackson’s. Not only did Jackson succeed in repelling the British, but they caused 2,500 deaths, all while suffering only six casualties and seven injuries. The war ended shortly afterwards. While Jackson was accredited for the victory against the British, he acknowledged he owed many thanks to Jean Lafitte who had earned his respect. In return for his service, Jackson pardoned Lafitte and his men of all crimes after the war.8 While many Batarians used this new chance at life to seek an honest living, Lafitte quickly fell back into his old ways.

Having grown bored of the civilian life he had been given, Lafitte sought to reclaim the ships and supplies that had been taken from him by the British, but the request was refused by the United States government because they felt he had no right to any items that he had stolen. Outraged, he and his men set sail for new land. They eventually settled in Galveston Texas, an island belonging to Mexico, which was still under Spanish rule. Lafitte arrived in the midst of a revolution, an opportunity that he took full advantage of. Lafitte once again offered his services in exchange for permission to settle in Galveston, and the right to keep any ships and riches plundered from Spanish ships. In no time at all, Lafitte had once again established his criminal empire, and had even finally earned the privateering licence he had wanted for so long.3

Just as his beginning was shrouded in mystery, so too was his end. No one knows for sure what fate befell him later in his life. Some say he changed his name to John Lafitte, married and lived the rest of his days in Illinois. Others believe that he relocated to the Yucatan Peninsula where he died a few years later of disease.5 Others say he joined Simon Bolivar in his war against the Spanish in South America, or even joined joined a band of pirates in the Caribbean. There are many tales of the pirate known as Jean Lafitte, and since much of his life has since been lost to time, they shall remain just that. Whether he was a handsome rogue, a war hero, or a thieving pirate and a criminal, Jean Lafitte will continue to live on in history.